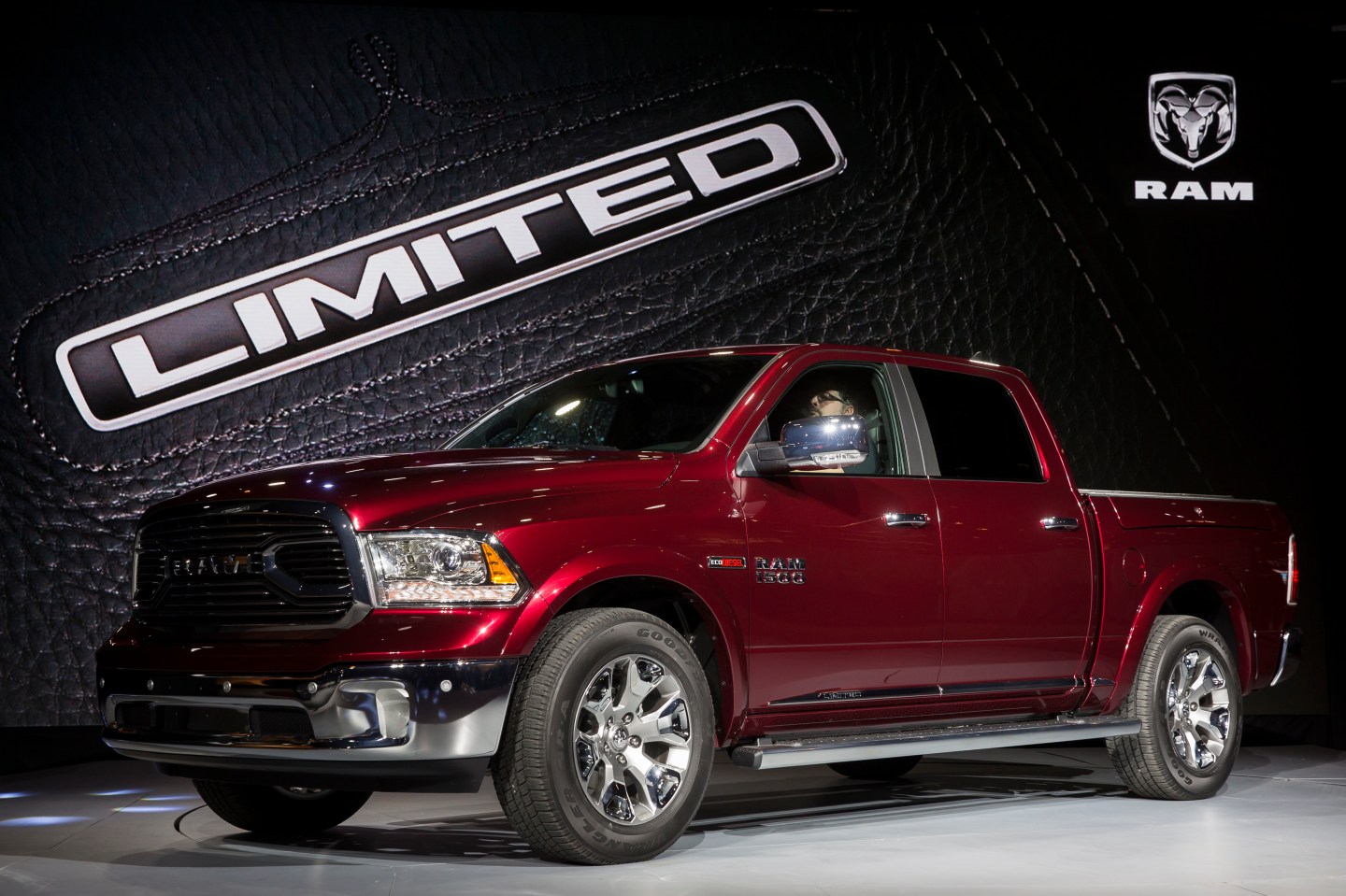 The 2015 Ram 1500 Laramie Limited is unveiled during the media preview of the Chicago Auto Show at McCormick Place in Chicago on Thursday, Feb. 12, 2015. The Chicago Auto Show will be open to the public from Feb. 14 through Feb. 22. (AP Photo/Andrew A. Nelles)
Photograph by Andrew Nelles — AP

The skillful wringing of outsize profit from full-size pickup trucks is on display with the arrival of the 2015 Ram Laramie Limited, the newest luxury model built by Fiat Chrysler Automobiles N.V. (FCA)

Dripping with chrome and lavish appointments, Ram Laramie Limited starts at $50,000 and can cost as much as $70,000. While no one but Fiat Chrysler’s accountants know for sure, analysts estimate these trucks may generate more than $20,000 each. By contrast, Fiat Chrysler’s mass-market car models sold in the U.S. may yield a thousand or two or less.

As such, brisk sales of pickups, especially the luxury variety, are critical to all three of the Detroit-based automakers’ financial success. FCA is the third largest seller of pickups, after Ford Motor Co. and General Motors Co. Last year, about 22% of the 440,000 Ram pickups sold by FCA carried the Laramie luxury designation.

Ram’s high-end Laramie luxury treatment gets applied to regular full-size pickups, as well as heavy-duty versions used for towing or hauling heavy loads. The look is designed intentionally to distinguish Laramie from less expensive Ram pickups. Bob Hegbloom, chief executive of Ram, said the Limited signals that its owner is a cut above other pickup owners: the construction company owner drives the Laramie, the tradesmen at the work site steer more plebian pickup models. The new model goes on sale this summer.

Ram’s regular Laramie, without the “Limited” designation, is a step up, too. Laramie’s interior is only slightly less posh than that in the Laramie “Longhorn,” another luxury designation. The latter is decorated with a southwest motif and frills that a wannabe rancher in Phoenix might prefer. What about a pickup-loving urban dweller?

“Laramie Limited has a city refinement,” said Dave Elshoff, a spokesman for FCA’s truck operations. “It’s more opulent.” With features like a Ram badge in sarcastically large chrome letters, heated seats and mirrors, sophisticated sound systems and navigation, the fanciest Rams shopped at dealer showrooms are nothing if not a luxury car as worthy of the designation as any Lexus, Cadillac or Mercedes-Benz.

Ford, GM and FCA have intensely loyal followings. A minority of pickup owners flit from one brand from another, though lately Ram has attracted more attention from shoppers usually considering only Ford’s F150s or Chevrolet Silverados.

GM and Ford each offer their own luxo-pickup: GM’s Chevrolet Silverado comes with a “High Country” package with options such as bicycle carriers, tool chests and a special chrome grill that pushes the price above $60,000. The GMC Sierra can be bought with a premium Denali package including leather upholstery and an array of extras.

Likewise, Ford’s F150 King Ranch pickup comes as a top-of-the-line Platinum edition, starting at $51,000, with many pricey extras, including advanced safety technology such as lane-change warning.

Toyota and Nissan lag far behind Detroit in the full-size pickup truck competition, though neither have thrown in the towel. Their persistence represents the big profit opportunity in front of both automakers if they somehow could break through.

With gasoline prices at a relative ebb, sales of the heavy, relatively fuel inefficient pickups are headed for another banner year.