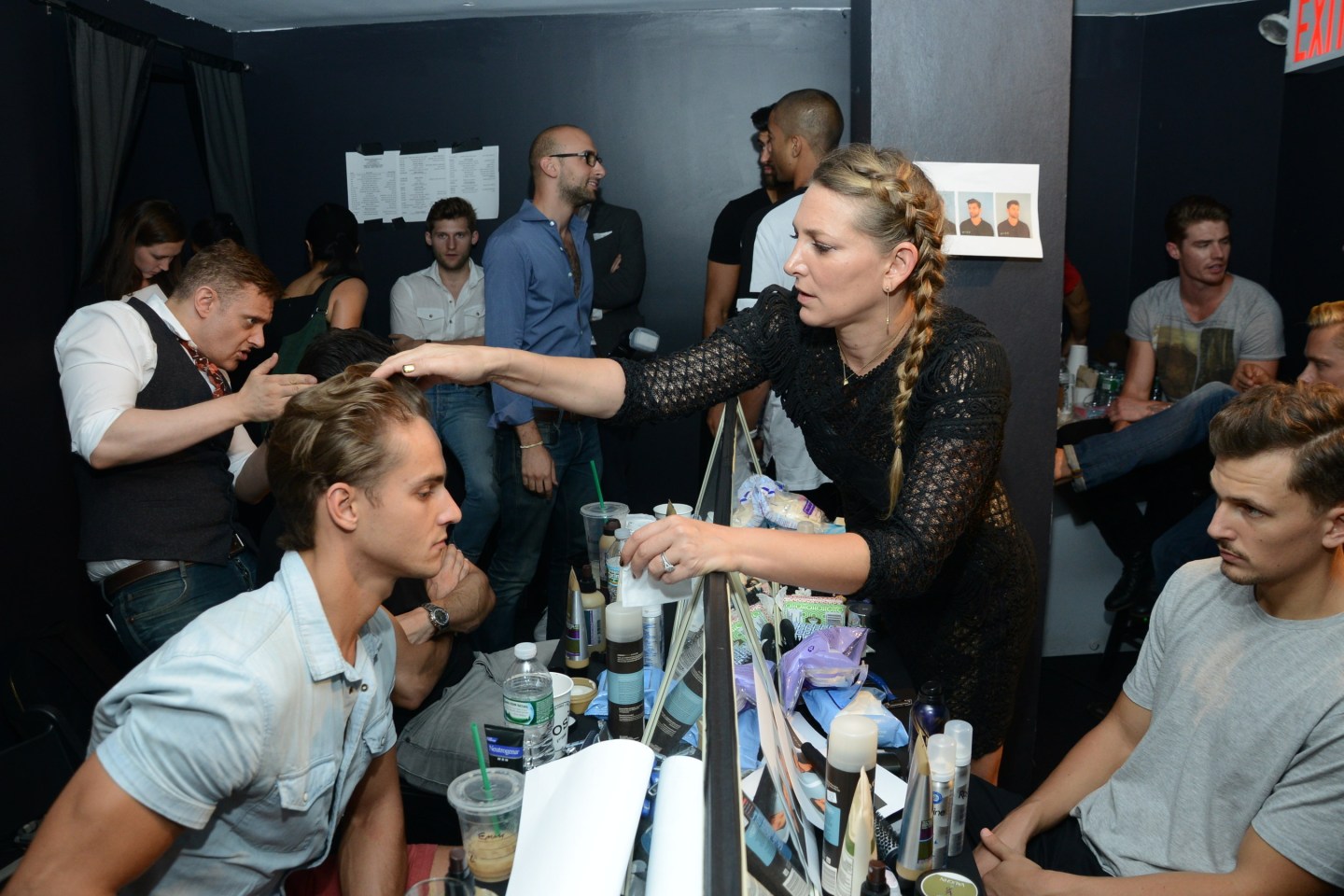 Women will likely experience the bulk of the superficial “who are you wearing?” questions on Oscar Sunday, but the men of Hollywood also put a fair amount of time into looking their red carpet best.

Schmidtke’s own story feels like it’s straight from the pages of a movie script. Originally from rural Antioch, Illinois, she graduated high school early and began attending beauty school at Pivot Point Academy in Chicago. She made her way out to Los Angeles at 21 with $800 and the dream of working as a stylist in the entertainment industry. Schmidtke failed at first, but eventually carved a niche as a men’s grooming expert—or, as she describes it, making hot guys hotter.

Making guys attractive is a big business. The men’s global grooming market is valued at $19 billion and is projected to grow to $26 billion by 2020—and many of the mega-brands that drive the market have Schmidtke on speed dial. Here’s how she operates as an independent contractor within Hollywood’s holy trinity of hair, skin and body.

What does your work schedule look like the night of an awards show?

On a typical red carpet date, you have two rounds of people. First, you get your clients who are walking the red carpet. You have about an hour and a half to yourself once the show starts, and then you have round two, which is making up everyone else who isn’t at the show but who will be going to parties. That’s when you begin running to their houses to get them ready. You better have some driving navigation skills.

How do grooming brand sponsorships figure into the evening for you?

If I do the red carpet, I can sell my credits for skin, hair and body. Let’s say a men’s shampoo company buys a look: I’m not allowed to talk about anyone else in the news that day specific to hair. That doesn’t mean a skincare brand can’t also do the same thing for skin. So in that hour and a half between when the red carpet is over and round two begins, I might be on the side of the road fielding calls and talking to the press about the grooming brands.

Can you give us a sense of the rates for a Hollywood stylist?

If I do the cover of a major magazine, it will be $250 to $300 per day, but then I can start to sell it [to the grooming brands] from there. A magazine cover brings prestige. If you do a cover and use a particular product, that brand will pay you anywhere from another $1,000 to $5,000. Now you’ve turned that cover into something bigger. If I am doing a bigger event or some kind of press on behalf of a brand, then the rate can go up to $50,000, depending on what it is.

How much can a top stylist earn annually?

You first moved from Chicago to Los Angeles in 1997 to become a stylist in the entertainment industry. How did that go?

I drove out to Los Angeles in my Saturn with a friend and $800. She was there to pursue acting and production, and we both failed miserably and moved back to Chicago six months later. I waited tables for a year and then moved back to Los Angeles in 1999 by myself with $1,100, a dog and that same car. My first lucky break came in a bar. I was sitting next to this guy who had a German accent—and my family is German—so I used my two words of German on him and we started talking. He was Marvin Lynch, a hair stylist with the Celestine Agency, and I began assisting him on shoots. Within six months, I got my own agent at the Celestine Agency. Because a really good hairdresser is hard to find, a lot of makeup artists would hire me on their jobs to do the hair, so they would do the makeup and I would do the hair. I was used to that Chicago work ethic, and I just kept working to build a portfolio until I got my own hair and makeup jobs.

What was your first big commercial break?

I was working as the groomer on an Out photo shoot in 1999 when a publicist from a different shoot in the studio came over and said the groomer for the shoot with her client, David Boreanaz, had messed up the date. She asked if I could help, so I ran back and forth the rest of the day between the shoots to get them both done. After the shoot, David and his publicist thanked me for my time. The publicist said she wanted to make it up to me and, of course, you hear that in Hollywood 1,000 times before it actually happens. Well, she did make it happen, and the next thing I knew I was on the press junket for American Pie, and then that transitioned to David Spade and Ashton Kutcher. It just blew up from there because those were all of her clients. Do I think I would have gotten that opportunity had I not worked morning, noon and night? No. I had thousands of “no’s” before I got the “yes.”

Does it ever feel intimidating to apply makeup to the faces of actors or give them skincare tips?

I have the attitude that they’re the best at what they do, and I’m the best at what I do. I’ve never been worried about the work. I would say the part that can be nerve-racking is when it’s an icon that I grew up on. I get excited with someone like John Travolta or Harrison Ford. When I met Oprah, I was doing makeovers on guys on her show. At the end of the show, Oprah put her arm around me, and I didn’t know if I should also put my arm around Oprah—does one put their arm around Oprah?

Can anyone break into the space based on skill alone?

Nowadays, you have to have an agent. If you don’t have an agent, people will be like, “Oh, you’re on your own.” You need someone working on your behalf while you are doing a job. I am now with a management agency, Something Artists, that really only takes on huge brands. It has Katy Perry’s stylist, J. Lo’s make-up artist and Britney Spears’s stylist. But, while an agent can set you up with people and brands, if you can’t retain 75% of them, then there is not a lot an agent can do for you.

You work with both consumers and brands. Do you see any untapped market opportunities for the brands?

Men want to know the science behind the products, and I would love to see more of that. If I hand a guy some free swag, he will ask why he needs it and how it pertains to him. I think the grooming companies are underestimating the value of sharing the science behind their products with men.