Staples stumbles in fight with Obama 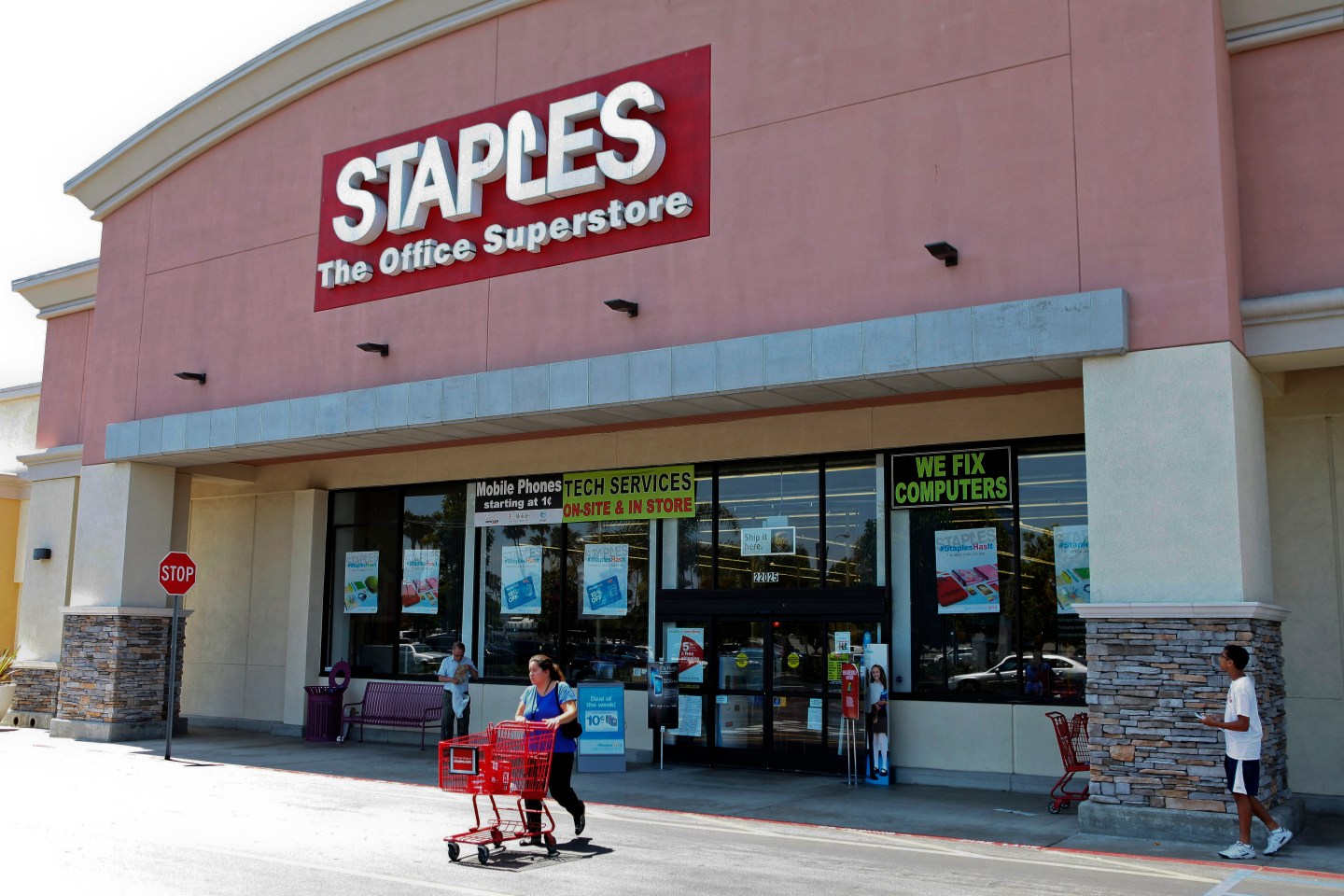 A customer pushes a cart outside a Staples Inc. store in Torrance, California, U.S., on Tuesday, Aug. 20, 2013. Staples Inc., the worlds largest office-supplies chain, slumped the most in a year after cutting its annual profit forecast because of declines in its retail and international business. Photographer: Patrick T. Fallon/Bloomberg via Getty Images
Photograph by Patrick T. Fallon — Bloomberg/Getty Images

Staples (SPLS) is known for its “Easy” button, but it may have just made its future growth much harder to achieve.

In fact, Staples had agreed to buy Office Depot back in 1996 for $3.36 billion, but was foiled by the Federal Trade Commission after consumer advocates argued that the deal would create a price-gouging duopoly. Now with Office Max out of the picture, the same argument would involve a price-gouging monopoly (which would seem to be more problematic, particularly when the 2003 Office Max/Boise Cascade merger and subsequent spin-off is taken into account).

Yes, there is lots of competition from online retailers like Amazon (AMZN), but few of them have major market share when it comes to corporate or government accounts. When a Fortune 500 company needs to buy 10,000 boxes of pens or 400 desk lamps for all of its U.S. offices, it generally goes to Staples or Office Depot.

For the FTC to bless the Staples-Office Depot merger, it basically will need to admit that it erred 19 years ago (likely under the guise of evolved market conditions). Or, more specifically, Staples will need to persuade the FTC that its 2015 deliberations should reach a different conclusion.

So why on earth is Staples going out of its way to antagonize President Obama, who happens to have nominated all five FTC commissioners?

If you haven’t heard, Buzzfeed reported that the company has begun insisting that its part-time employees not work more than 25 hours per week, due to “recent changes.” The insinuation is that Staples is trying to afford providing healthcare insurance to its part-time employees and/or it wants to avoid the per employee penalties that it would be charged for those uninsured employees working more than 30 hours per week.

This apparently did not escape Obama’s attention. In a subsequent interview with Buzzfeed, he said:

“I haven’t looked at Staples stock lately or what the compensation of the CEO is, but I suspect that they could well afford to treat their workers favorably and give them some basic financial security. If they can’t, then they should be willing to allow those workers to get the Affordable Care Act without cutting wages.”

Staples almost immediately fired back, releasing the following statement: “Unfortunately, the president appears not to have all the facts. The initial story was misleading as our policy regarding part-time employees is more than a decade old. It predates the Affordable Care Act by several years.”

Fortune has reached out to Staples to reconcile “recent changes” with “predates the Affordable Care Act by several years,” but has not yet heard back.

In any event, Staples getting into a tit-for-tat with Obama over his signature legislative achievement just does not seem to be a savvy business decision while this merger remains in regulatory limbo.

To be clear, one should have nothing to do with the other. And there is no evidence that President Obama has ever inappropriately played personal politics with M&A approvals (just ask Comcast CEO and Obama golfing buddy Brian Roberts, who is still waiting on his Time Warner Cable deal to go through).

But the pragmatic truth is that Staples doesn’t just need FTC approval to buy Office Depot. It needs the FTC to effectively admit past fault. It’s a high bar. Every little piece of positive PR helps. Having Obama basically call Staples greedy — and the company then responding by calling him ignorant — is not the sort of thing Staples should want in the recesses of FTC officials’ minds when it comes time to vote.