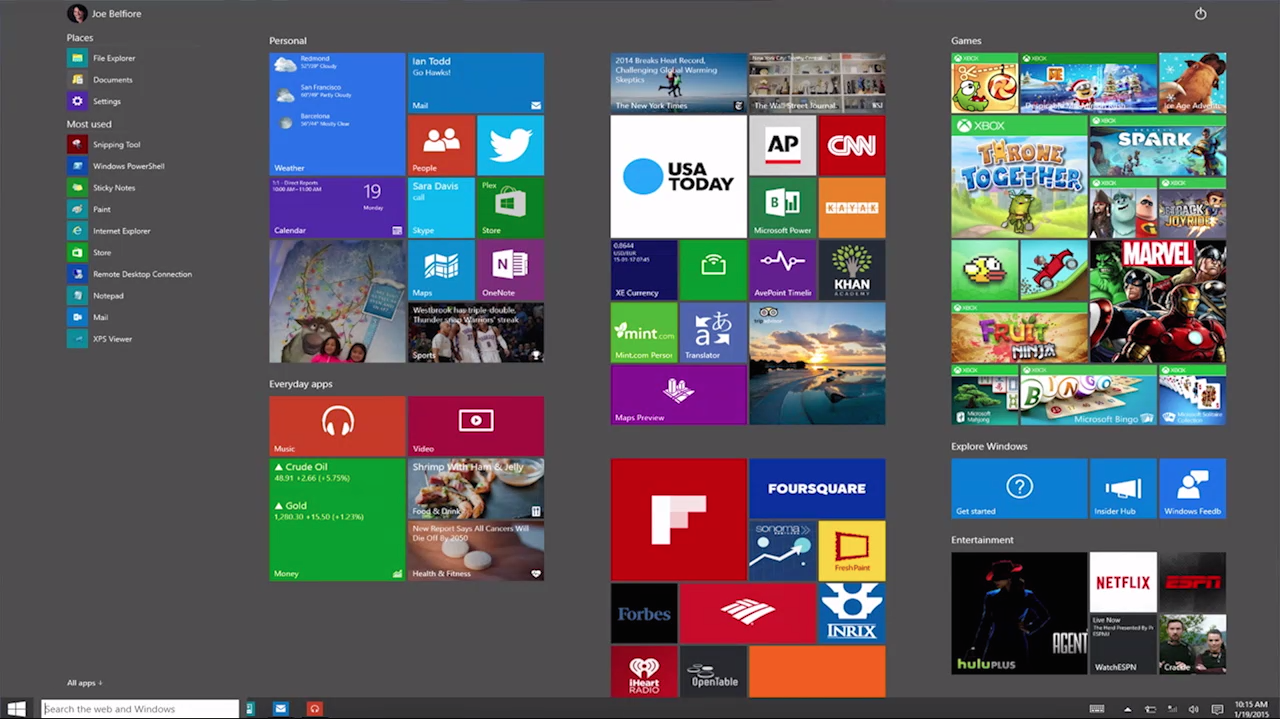 Tablet mode, as shown in an early build of Microsoft's Windows 10 operating system.
Courtesy of Microsoft

When Microsoft released its Windows Vista operating system, I refused to upgrade my personal or work computers. Much to the dismay of the IT department at the small business I was working for, there was nothing anyone could do to convince me otherwise.

Vista was a big departure from my beloved Windows XP. Reports of bugs and compatibility issues with drivers quickly surfaced reinforcing my steadfast decision to stay the course with XP. I was not alone in taking this approach—in 2009, Fortune wrote that some 92 percent of PCs were running XP three years after Vista’s release. Ouch.

My resolve gave way when Microsoft (MSFT) released Windows 7. But then I switched to the dark side: Apple’s OS X. I found its ease of use addictive, and before I knew it I was fully engulfed in Apple’s ecosystem of iPhones, iPads, Apple TVs, applications, and more Macs. My allegiance shifted much like it did when I exchanged my BlackBerry for my iPhone, as I discussed in my review of BlackBerry’s new Classic.

Even with my newfound admiration for all things Apple, I was still tempted each time Microsoft announced a new version of Windows. I toyed with Windows 8 during its technical preview, and later reviewed the Surface Pro 3 with Windows 8.1. Each time, I felt let down. I wanted more from the company that helped spark my passion for consumer technology.

Naturally, the process began to repeat itself with Windows 10. I downloaded the technical preview. I loaded it onto a 2-in-1 laptop from Hewlett-Packard. I tapped and clicked around the beta software.

And you know what? It’s not half bad. Good, even. Promising.

My biggest gripe about Windows 8.1 and the Surface Pro 3 was the number of inconsistencies in the user experience when you’d switch between using the device as a tablet and as a computer. Detaching the optional keyboard did nothing to change the experience—in fact, the overall experience was worse by doing so.

In Windows 10, a new Tablet Mode aims to clear the distinction and improve the mobile experience. When it’s enabled, applications default to taking up the entire screen and buttons get a little bigger. In essence, the entire desktop interface subtly converts to one meant for a touch-screen.

You’ll also be prompted to switch in or out of Tablet Mode based on how you’re using the device. If you’re using a Surface Pro 3 and detach the keyboard, a small notification pops up asking if you want to enable Tablet Mode. The process repeats in reverse whenever a keyboard is attached.

I realize I’m putting a lot of emphasis on the addition of a touch-friendly mode in Windows 10, rather than diving into the many other elements of the software that are new. But it’s warranted. Windows 8 was an utterly confusing experience, boiling down to what felt like two separate desktops and two separate sets of applications. Clicking on a link meant never knowing exactly where you were going to end up. It forced the user to make too many conscious decisions about how a task might be executed, instead of getting out of the way and just doing it.

This dichotomy appears to be eliminated in Windows 10. When you open a file or select a link, it’s no longer a mystery. You no longer need to bounce between desktops, and for the love of all that is holy in tech, the Start button is back.

Windows 10 comes one other especially notable feature: Cortana, Microsoft’s voice-activated personal assistant. A command of “Hey Cortana” brings up a search window where you can request to send an email, set a reminder, see sports scores, track a package, and so on. Productivity aside, I’ve had the most fun asking Cortana to tell me jokes. Why do sharks live in saltwater? Because pepperwater makes them sneeze. A Dad joke, told by a computer. Does it get any better?

In all seriousness, though, it’s clear Microsoft is on the right track with Windows 10. Make no mistake, it’s not fully cooked yet: new builds of the technical preview continue to roll out that introduce new features and fix issues. All the while, my intrigue grows, and I can’t wait to more thoroughly evaluate the version that’s ready to ship.

For the first time in a very long time, I’m genuinely excited for a Microsoft product. Don’t let me down, Satya.