S&P got off easy 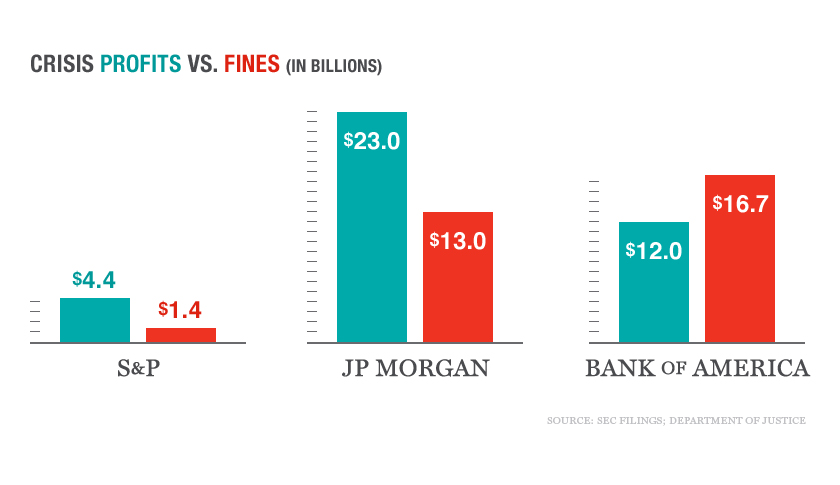 Standard & Poor’s should be paying $1 billion more, and perhaps as much as $6 billion.

Earlier this week, S&P settled charges with the government that it knowingly misled investors about the risk of certain mortgage bonds in order to win business from banks. It was all part of the subprime mortgage machine that caused billions of dollars of losses and nearly collapsed the economy.

The question is whether S&P paid enough for its misdeeds. The answer: Heck no.

How much should S&P have paid? That’s a tricky question. The $1.4 billion is far less than some banks have paid. And that may make sense, it profited less than the banks from selling mortgage bonds. What’s more, unlike the banks, it didn’t directly sell the mortgage securities or acquire the loans that went into them. Still, most accounts of the financial crisis fault S&P and ratings firms in general as a key part of what went wrong. The banks used the ratings to sell the bonds. And S&P understood that the higher the rating, the easier it would be for banks to sell the bonds.

Of course, back in 2006, mortgage bonds were hot. So even if S&P had given the bonds lower ratings, they might have sold anyway. Even unrated pieces of mortgage bonds were selling. And it was clear to the professionals back then that S&P’s ratings had a lot of wiggle room. But still, it’s unlikely that town managers in places like Cedar Rapids, IA would have bought subprime mortgage bonds had they been told by S&P the extent of their risk.

A good yardstick for how much S&P should pay is the amount of money it made from its fraudulent ratings plus some damages. The calculation could also factor in the money lost by bond investors who depended on the inflated ratings.

But here’s the problem: The government doesn’t give us those numbers. Like in other settlements, the government appears to have made no attempt to figure out just how much S&P profited from its fraudulent scheme or how much damage was done by it. Or if the Justice Department did, there’s no evidence of that in its settlement with S&P. Critics say the government purposefully doesn’t include those numbers so that the settlements can’t be questioned.

What we do know, from the financial filings of McGraw Hill (MHFI), which owns S&P, is how much the credit rater made total during the years covered by the government suit. That’s $4.4 billion from 2004 to 2007. S&P’s settlement is just over 30% of those profits. As a percentage of profits, you would expect that to match up to what the banks paid. It doesn’t JPMorgan Chase’s settlement of $13 billion accounts for roughly 55% of the profits it made in its investment banking and mortgage banking divisions from 2004 to 2007. Bank of America’s settlement is 140% of its investment banking and mortgage banking profits during those years. Based on those percentages, S&P should have paid $2.4 billion or as much as just over $6 billion.

But the bigger problem with the settlement is this: Pretty much everyone agrees that the problem that lead S&P to inflate its ratings comes from the an inherent conflict of interest in its business. The companies or banks issuing bonds are the ones that pay S&P for their rating. And those companies and banks want the best rating as possible so they can sell more bonds. And that hasn’t changed. That means the pressure on S&P to inflate its bond ratings is still there. And in fact S&P recently settled another case involving a similar fraudulent ratings scheme that happened years after the financial crisis. It’s a broken system that has yet to be fixed. The next time the government finds that S&P has defrauded investors again, it should ask for more.