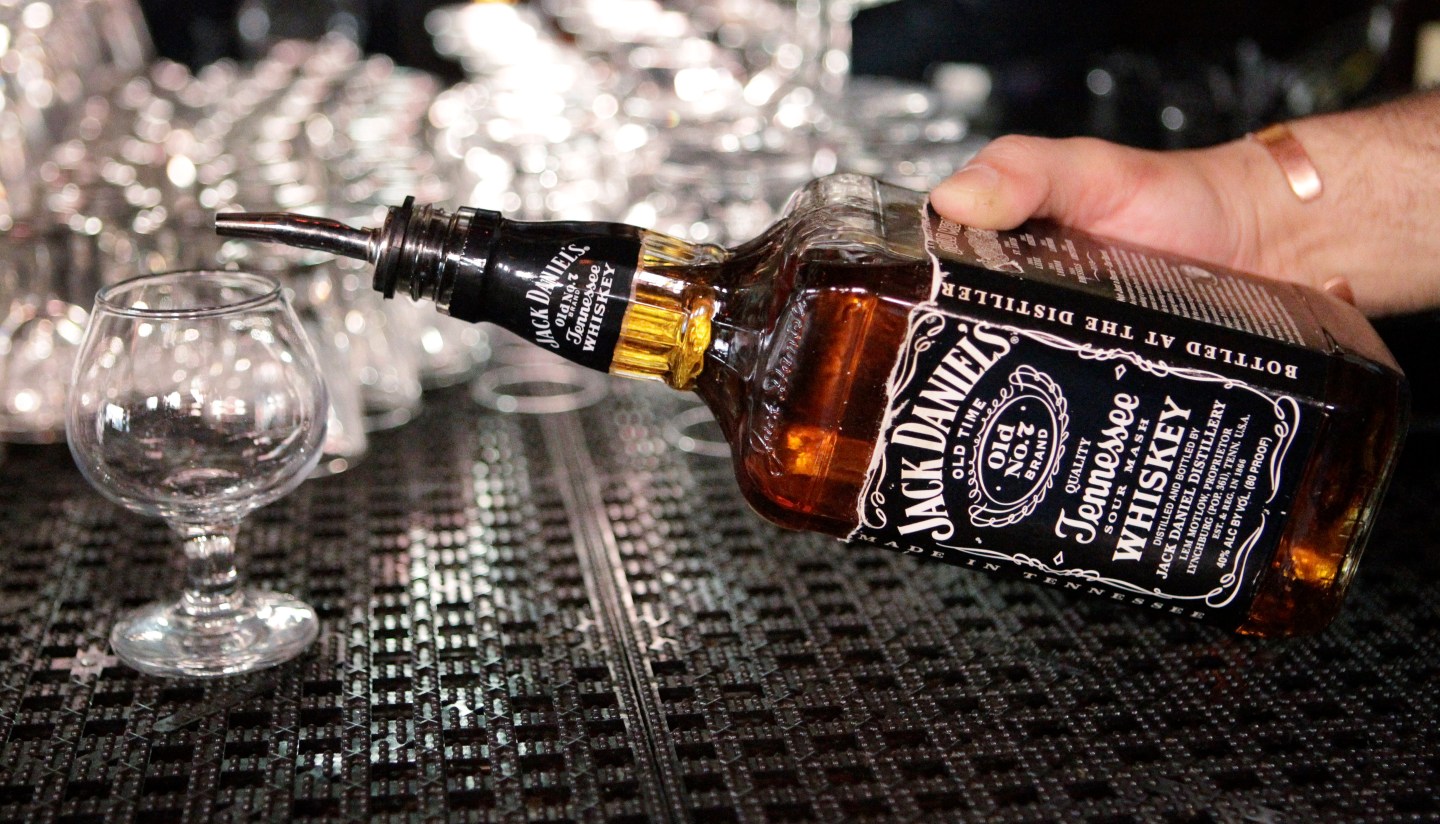 In this March 4, 2011 photo, a bartender begins to pour a drink from a bottle of Jack Daniels at a bar in San Francisco. Liquor company Brown-Forman Corp. is reporting a 30 percent gain in third-quarter net income Tuesday, March 8, led by surging international sales and a strong showing by its flagship Jack Daniels brand. (AP Photo/Paul Sakuma)
Photograph by Paul Sakuma — AP

Whiskeys from the U.S. and the British Isles, and Mexico’s native spirit, were the top winners in 2014, and helped the spirits industry steal more market share from the beer industry, according to new data.

Volume for the category climbed 2.2% in 2014 from the prior year, according to data by the Distilled Spirits Council of the United States, as American drinkers gave the spirits industry a market share victory over brewers for the fifth straight year.

Spirit makers have scored wins at bars and liquor stores by offering new and flavorful products that have been a hit with consumers, such as honey flavored whiskeys. The cocktail culture has picked up momentum for several years, and the trade group, known as Discus, has won key victories on the state level that allow for Sunday sales in more municipalities and spirits tastings in almost all states. That greater access has helped fuel the industry’s growth.

“Consumer interest in industry innovations and premium products from distilled spirits producers of all sizes contributed to another year of steady growth in 2014,” said Distilled Spirits Council President and CEO Peter H. Cressy.

Here are the four key takeaways from the Discus report, which estimates that overall retail sales of distilled spirits in the U.S. is nearly $70 billion.

The spirits industry’s market share stood at 35.2% in 2014, up from 34.7% a year ago, according to Discus. With wine flat at 17%, all of the business spirits brands stole in the beverage alcohol market came at the expense of beer. Beer’s market share for the alcohol business stood at 56% in 1999, but slipped below the 50% threshold in 2010 and now stands at 47.8%. Discus and major spirits industry makers have worked hard to expand the liquor industry’s reach. Since 2002, 16 states and the District of Columbia have passed laws allowing sales on Sundays, bringing the total up to 39 states that have moved away from such Prohibition-inspired restrictions. Five new states authorized spirits tastings in 2014, with 46 now allowing some form of tastings. And the spirits industry has sought to get a greater foothold in athletic stadiums and other occasions that were for decades dominated by the beer industry.

2. Tequila is having a moment

Most media attention in recent years has focused on the whiskey boom, which is certainly still pushing ahead, but Mexico’s famed native spirit is also a top performer. Volume leapt 5% for tequila in 2014, growth that was powered by the priciest bottles, which saw a jump in demand of nearly 15%. When tequila first became popular in the U.S. in the 1980s, the spirit was known for its harsh flavor and low price tag. But manufacturers have worked hard to change how Americans view tequila today and those efforts are paying off. Patron, for example, last year debuted three new pricier tequilas under the “Roca” line to court greater interest in the beverage, which is gaining traction at bars and restaurants.

3. Whiskey is still the leader

The whiskey market’s dominance, which was highlighted in a Fortune cover story last year called “The billion-dollar bourbon boom,” continues without any signs of a slow down. Total whiskey volume jumped 7.3%, the best performer among all the key spirits categories, with the greatest gains for blended whiskey (up 42%) and Irish whiskey (up 9.1%). U.S. produced bourbon and Tennessee whiskey also fared well, up 7.4%. Revenue for bourbon and Tennessee whiskey increased across all price points and for both flavored and traditional products. Jack Daniel’s Tennessee Honey and Fireball Cinnamon Whisky are among the flavors that have fared particularly well, although many major manufacturers have sought to appeal to rising interest in flavors by concocting their own blends.

Vodka grew last year, but only by 1.6%, according to Discus, signaling yet again that the spirit isn’t performing as well as whiskey and tequila. Part of the problem for vodka is a potential cautionary tale for whiskey: flavors aren’t as popular as they once were. Vodka makers for years have churned out traditional flavors, such as vanilla and citrus, but have also veered into some unusual offerings that feature marshmallow and cookie dough. Observers say those flavors have turned off some consumers, opening up an opportunity for tequila and whiskey makers to court new drinkers.

It isn’t that flavors aren’t still a hit, just not the ones vodka makers have been producing lately. Overall, flavors added 2.8 million cases to the whiskey category last year, but declined by 900,000 for vodka and rum, Discus reported. That suggests some flavor fatigue that the vodka business is facing.

That weakness is showing up in the financial reports of some of the major spirits makers. Diageo, which counts on vodka for 13% of the company’s total net sales, late last month said the flavored vodka category is “clearly challenged” — and that’s a problem because it is 25% of Smirnoff’s business.

“We are still seeing continued challenges,” said Diageo Chief Executive Ivan Menezes last week when discussing flavored vodkas. Diageo was also hurt by the fact that it hasn’t yet participated in the North America whiskey flavor explosion, which Menezes said the company would be correcting.