The cold, hard truth about autonomous vehicles and weather 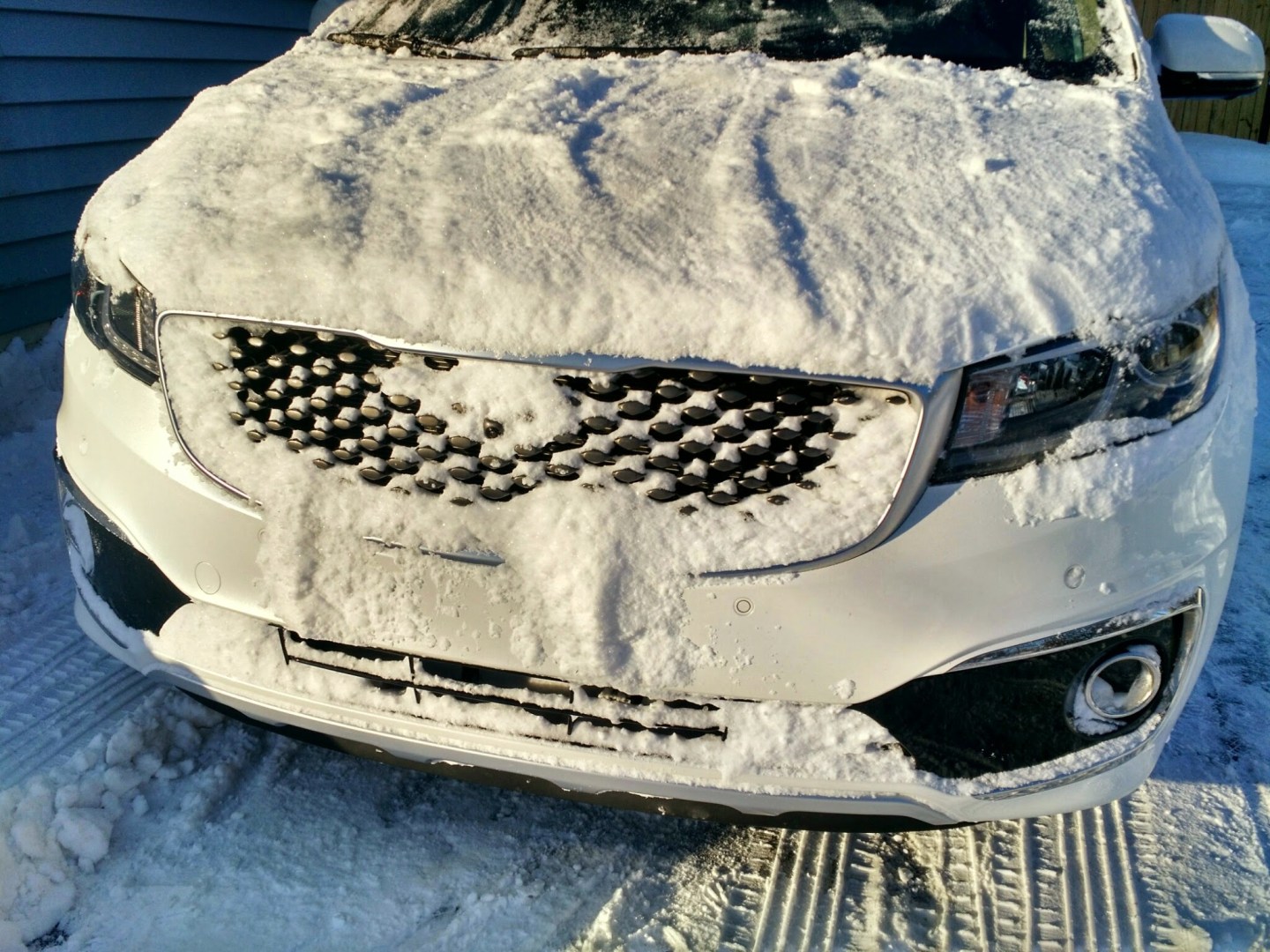 A detailed study by Boston Consulting Group has concluded that partially autonomous vehicles will appear on roads by 2017 and fully self-driving cars will arrive a decade from now.

First, however, cars must be secure from cyber attack; liability issues also must be resolved, social resistance overcome and high-precision maps must be created, BCG said in its January 8 report.

BCG might have added another unanswered question: What about the snow?

Sam Abuelsamid, a senior analyst for Navigant Research, a marketing intelligence firm based in Boulder, Colorado, has been driving and testing a 2015 Kia Sedona equipped with advanced autonomous driving systems. Starting on Saturday night, as heavy snow blanketed southeast Michigan, he noted how the weather was neutralizing some of the Sedona’s advanced technology features.

He posted a picture of the frozen nose of the Sedona (see above) to his friends on Facebook, with this comment:

“We’re a lot farther from general use self-driving cars than those in Silicon Valley would like you to believe. The radar sensor in the front and the rear camera are completely covered. While the snow was falling, I had to turn off the parking assist because the falling snow was triggering the ultrasonic sensors causing the system to beep continuously while there was nothing around the vehicle.”

Prior to the snowfall, Abuelsamid said, the Sedona’s adaptive cruise control, which relies on radar, worked reasonably well and continued to do so even covered with snow. Adaptive cruise control maintains a vehicle’s speed and a safe distance from any vehicle ahead, adjustable by the driver. In the event that the vehicle begins to draw too close, the car’s brakes are activated.

The radar also is used for a feature that detect whether vehicles or pedestrians are approaching from the side when backing out of a parking space. The Sedona’s blind-spot vehicle detector and forward collision warning, which rely on radar as well, also functioned in the snowy conditions, he said.

Optical cameras used to warn the driver when Abuelsamid’s Sedona was straying from its lane and for guidance when backing up were rendered useless by the snowy weather.

Google’s (GOOG) celebrated autonomous car employs Lidar, a sensing technology that requires light and also would have been inoperative in a snowstorm, Abuelsamid said. Naturally, Google scientists realize their vehicle will be expected to operate in the vicinity of Ypsilanti, Michigan, where Abuelsamid lives – as well as in Silicon Valley, which hasn’t seen snow in recent memory.

A potential solution to the shortcomings of sensing technology may lie in wireless communication between vehicles and from vehicles to infrastructure such as stoplights and sensing devices installed in roadways. Automotive suppliers such as Robert Bosch GmbH, Denso Corp., Continental AG and Delphi Automotive PLC are heavily invested in autonomous research and development. The pending $12.4 billion acquisition of TRW Automotive Holdings Corp. by ZF Friedrichshafen AG is driven by the latter’s interest in TRW’s sensors and other autonomous technology.

According to BCG’s forecast, the numerous features that soon may add up to a self-driving car will create a $42 billion market for the suppliers that manufacture the technology.

How soon self-driving cars become a reality will depend greatly on engineering breakthroughs and ingenuity, which bad weather is unlikely to delay.