8 of the world’s most exclusive clubs — can you join? 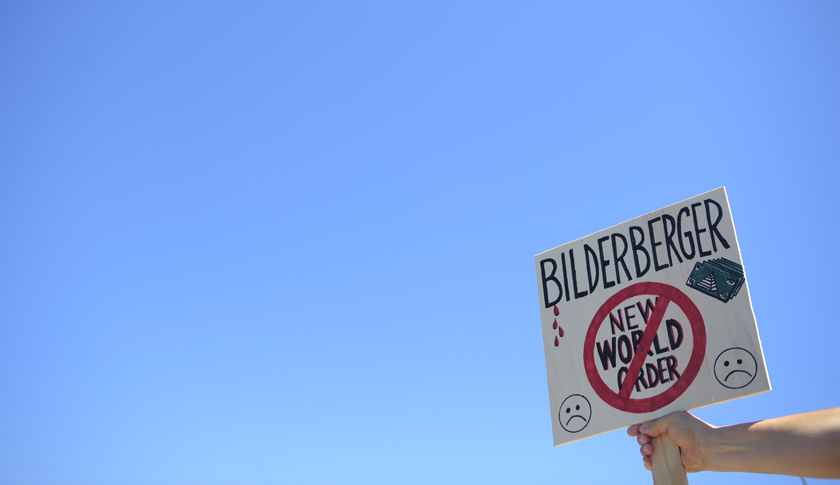 An activist protests near the meeting place for the conference of the Bilderberg Group meeting in Sitges, Spain, Thursday, June 3, 2010. The Bilderberg Group is an unofficial conference of around 130 invitation-only guests who are insiders in politics, banking, business, military and the media. The group's meetings are held in secret and are closed to the public. (AP Photo / Manu Fernandez)
Photograph by Manu Fernandez — AP
These groups are not your university’s alumni club. Certain national and international associations and business groups command a high price of entry, high prestige, and members with high power — but they often keep a low profile, if their proceedings or membership rosters are not downright secret. Want to join? If you have to ask, you’re not invited. We can reveal, however, that one of them — the Alfalfa Club — is holding its annual banquet on Saturday night. Head to Washington, D.C. if you want a peek at the invitees.

A program of events from a Bohemian Club ceremony in the archive collected by Mary Moore, a longtime political activist has followed and protested the activities of the Bohemian Club, in Occicental, Calif., July 21, 2010. Bohemian Grove, the infamous all-male enclave of the elite and powerful and a traditional hot spot for roadside protests, seems to have lost much of its power to outrage. (Monica Almeida/The New York Times)
San Francisco’s Bohemian Club is a private gentleman’s club founded in 1872 originally for bohemian writers, artists, and musicians -- but membership expanded over the years to encompass figures such as Ronald Reagan, Richard Nixon, as well as other more conservative leaders and prominent businessmen. While the club’s current membership list is not public, what is known is the club’s annual July tradition of two weeks in the woods at Bohemian Grove, in Monte Rio, Calif., a sort of summer camp for CEOs and other wealthy men. It's referred to by the San Francisco Chronicle as a “rowdy bacchanal.” Officially the group’s motto is “Weaving Spiders Come Not Here” from Shakespeare’s A Midsummer Night’s Dream -- meaning that members should leave business at home. However, the Washington Post cited one notable exception in 1942 when a planning for the Manhattan Project was held there.

Supreme Court Judge Sonia Sotomayor is sworn in during her confirmation hearing on July 13, 2009.
This invite-only women’s club based in New York is thought of as the female answer to the Bohemian Club. Formed in 2001, the Grove meets once a year in Belize or other locations in Central America. When the group met in Colombia in 2011, the New York Times described them as “a sort of Illuminati of the business and political worlds.” Their mission, according to the same article: to put a woman in the White House. It’s called The White House Project. The ranks of international Grovers include directors from Xerox (XRX), Procter & Gamble (PG), Nordstrom (JWN), PetSmart (PETM), REI (REI), the Presiding Bishop of the Episcopal Church, as well as Supreme Court Justice Sonia Sotomayor, until she resigned in 2009 during her confirmation hearings, since federal judges may not be part of a club that discriminates based on sex.

In this undated photo, the Yellowstone Club near Big Sky, Mont. is seen. A federal bankruptcy judge has ruled that Credit Suisse must offer about US$42 million in cash to clear other creditors' claims on top of any bid it makes for Yellowstone Club at auction. (AP Photo/Bozeman Daily Chronicle, Erik Petersen)
In Big Sky, Mont., lies a 13,600-acre private ski and golf club plus residential community with membership costs that are Rocky Mountain high. A 2009 New York Times article reported a minimum $250,000 to join, with annual dues of around $20,000, plus the cost of a home (currently ranging $1.65 million for a homesite -- $18 million for a ranch). Members of the club have included Dan Quayle, Jack Kemp, Peter Chernin, Steve Burke, Bill Gates, bankers Todd Thomson and Robert Greenhill, as well as L.A. Dodgers owner Frank McCourt.

An activist protests near the meeting place for the conference of the Bilderberg Group meeting in Sitges, Spain, on June 3, 2010.
Since 1954, Bilderberg has been an annual invite-only three-day conference of 120-150 leaders and figures from industry, finance, academia and the media. Two-thirds of the participants hail from Europe and the rest come from the United States. The current steering committee features American members from Microsoft (MSFT), The Goldman Sachs Group (GS), Lazard (LAZ), and Alcoa (AA), as well as international members from Deutsche Bank AG (DB), TD Bank (TD), and Airbus (AIR). According to the Bilderberg Meetings website, “The conference is a forum for informal discussions about mega-trends and major issues facing the world.” However, not everyone believes the secretive summit is innocuous. “Some outsiders suspect that the Bilderbergers are part of something much more sinister than the world’s most exclusive debate club,” said Julie Tibbott, author of Members Only: Secret Societies, Sects, and Cults Exposed! (Zest Books, 2015). She notes that conspiracy theorists claim the group is a threat to democracy with intentions of organizing an international government: a New World Order. Defenders say the conference was instrumental in creating the European Union.

Alibaba Chairman Jack Ma.
Meanwhile, in China, The China Entrepreneur Club gathers the country’s top 46 leaders of business, as well as politicians, academics, and others. Formed in 2006, the club stages events and also travels together. According to the BBC, new members are rarely admitted. Members include Guo Guangchang (the Chinese Warren Buffett), club chairman and Lenovo computer founder Liu Chuanzhi, and Alibaba (BABA) ecommerce billionaire Jack Ma, China’s richest man.  Chuanzhi says the private nonprofit exists partially to encourage acceptance and trust of the private sector and business. Sustainability is another concern -- a CEC subgroup sponsored by Deng Feng and others is a think tank concerned with fighting pollution, as well as other social and environmental issues.

In this Nov. 24, 2014 photo, an Augusta National Golf Club members green jacket signed by Arnold Palmer, which will be included in the estate auction of the late Peter Wege, is seen in Grand Rapids, Mich. The estate of former Steelcase Inc. chairman Peter Wege is auctioning off items from the late philanthropist's home in East Grand Rapids. Wege was a major donor to the Grand Rapids Art Museum and other organization before he died in July at age 94. (AP Photo/The Grand Rapids Press, Emily Rose Bennett)
The prestigious 300-or-so member Augusta National Golf Club, which opened in 1933, has had a reputation for extreme exclusivity. African-Americans were not permitted to join until 1990, and women were not allowed until 2012. On top of that, Clifford Roberts, one of the co-founders, is quoted in the New York Times saying,  “As long as I’m alive, all the golfers will be white and all the caddies will be black.” (He died in 1977.) Annual membership fees are about $10,000, but even for those who can pony up, it’s still invite-only. Those who make it known they want into the club haven’t got a chance. Present members include Bill Gates and Warren Buffett, as well as dozens of the world’s most influential businessmen, CEOs, and bankers, according to The Independent. The first female members were Condoleeza Rice and Darla Moore, a partner in the Rainwater, Inc. investment firm.

President Ronald Reagan shakes hands with Barron Hilton upon his arrival at the Capitol Hill, Saturday, Jan. 26, 1985 in Washington to attend the annual Alfalfa Club meeting. (AP Photo/Budd Gray)
The first rule of Alfalfa Club is: it only exists to have a banquet once a year. On the last Saturday of January, around 200 politicians and prominent business figures gather to rub elbows in black tie in Washington, D.C. Members have included George W. Bush, George H. W. Bush, Richard Nixon and Ronald Reagan. Women weren’t invited until 1993, after a boycott by President Clinton, and the first African Americans were admitted in the 1970s. The first Alfalfa Dinner was held on Jan. 19, 1913 to mark Robert E. Lee’s birthday, taking their name from the plant that will send its roots far to get a drink. Although the list of well-known members is long, including Sandra Day O’Connor, Warren Buffett and Michael Bloomberg, anyone hoping for an invite will have to wait for an existing member to die.

Co-chairman David Rockefeller, of the United States, delivers a speech to open the 16th U.S. Japan-Europe Trilateral Commission Meeting in Tokyo on Sunday, April 21, 1985. The annual meeting will discuss international politics, economics and military issues among others during its three-day session. To the right, from left, Prof. Masaaki Kosaka of Japan and Edmund Wellenstein of the Netherlands. (AP Photo/Tsugufumi Matsumoto)
The invite-only Trilateral Commission is a think tank formed in 1973 by David Rockefeller to improve communications and cooperation between North America, Europe, and Pacific Asia. Other members included diplomat Henry D. Owen, former governor of Pennsylvania William Scranton, Truman and Eisenhower adviser Robert Bowie, atom arms expert Gerard C. Smith, Dick Cheney, Bill Clinton, Madeleine Albright, and George H.W. Bush.  It now has about 390 members, according to the group’s website.  The organization has drawn the attention of conspiracy theorists, appearing in some 9/11 theories claiming it aims to install a new world order. The commission, for its part, offers up presentations from its meetings and publications on its website.