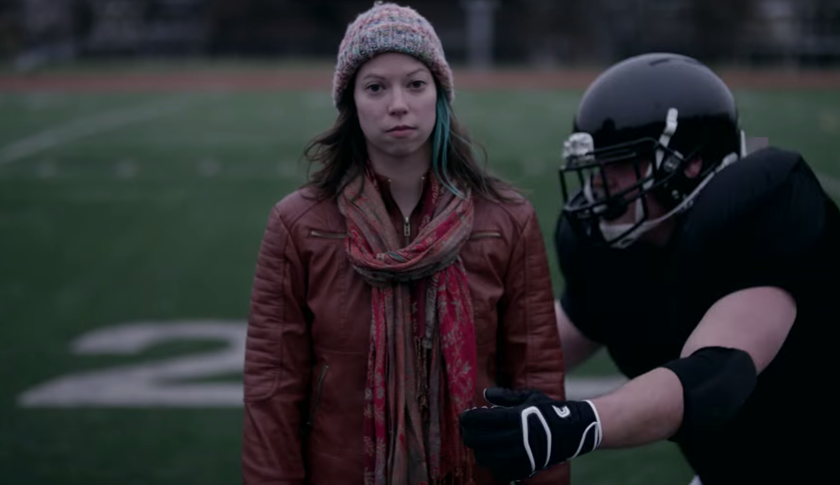 Only days before the Super Bowl, a feminist group called UltraViolet has released a provocative ad focusing on domestic violence in the National Football League. It also calls for the resignation of NFL Commissioner Roger Goodell and will be running on web sites through the Super Bowl Sunday.

The ad shows a fully padded football player preparing for a tackle. He charges ahead, but rather than run down an opponent, he attacks a woman standing alone on the field. “Let’s take domestic violence out of football,” a voiceover says while on-screen text reads “55 NFL abuse cases unanswered.” The ad ends with the hashtag, #Goodellmustgo.

The ad already has sparked discussion because initially, Sports Illustrated’s website (which, like Fortune, is owned by Time Inc.) turned it down. Sports Illustrated then said it mistakenly rejected the ad. It and the Huffington Post plan to run both the ad and the additional banners over the next few days.

Started three years ago, UltraViolet claims to have 600,000 members across the country. The group uses attention-getting social media campaigns to pressure government, business, and other industry leaders. “We believe bias has a cost,” explains the group’s co-founder, Nita Chaudhary. “Our goal is to tackle the institutional structures that are rewarded for fostering sexism.”

After the Ray Rice scandal, UltraViolet targeted the NFL and its commissioner. The group claimed to have unearthed 55 additional cases of abuse in the NFL they say they went unanswered under Goodell’s watch. Since then, UltraViolet and its members have been waging a “Goodell Must Go” campaign that has included online petitions, emails to advertisers, phone calls to the league, and even airplane banners over selected stadiums on game days.

Meanwhile, the NFL and its commissioner are working to tackle the issue of violence against women head on. Last fall, Goodell announced the NFL would be donating to domestic violence hotline organizations. This weekend the league will be airing their own anti-domestic violence ad during the Super Bowl. Produced by Grey Worldwide, the haunting spot recounts a real life 911 call made by a victim. Intended to create awareness about the issue, the spot invites viewers to learn more by visiting NoMore.org.