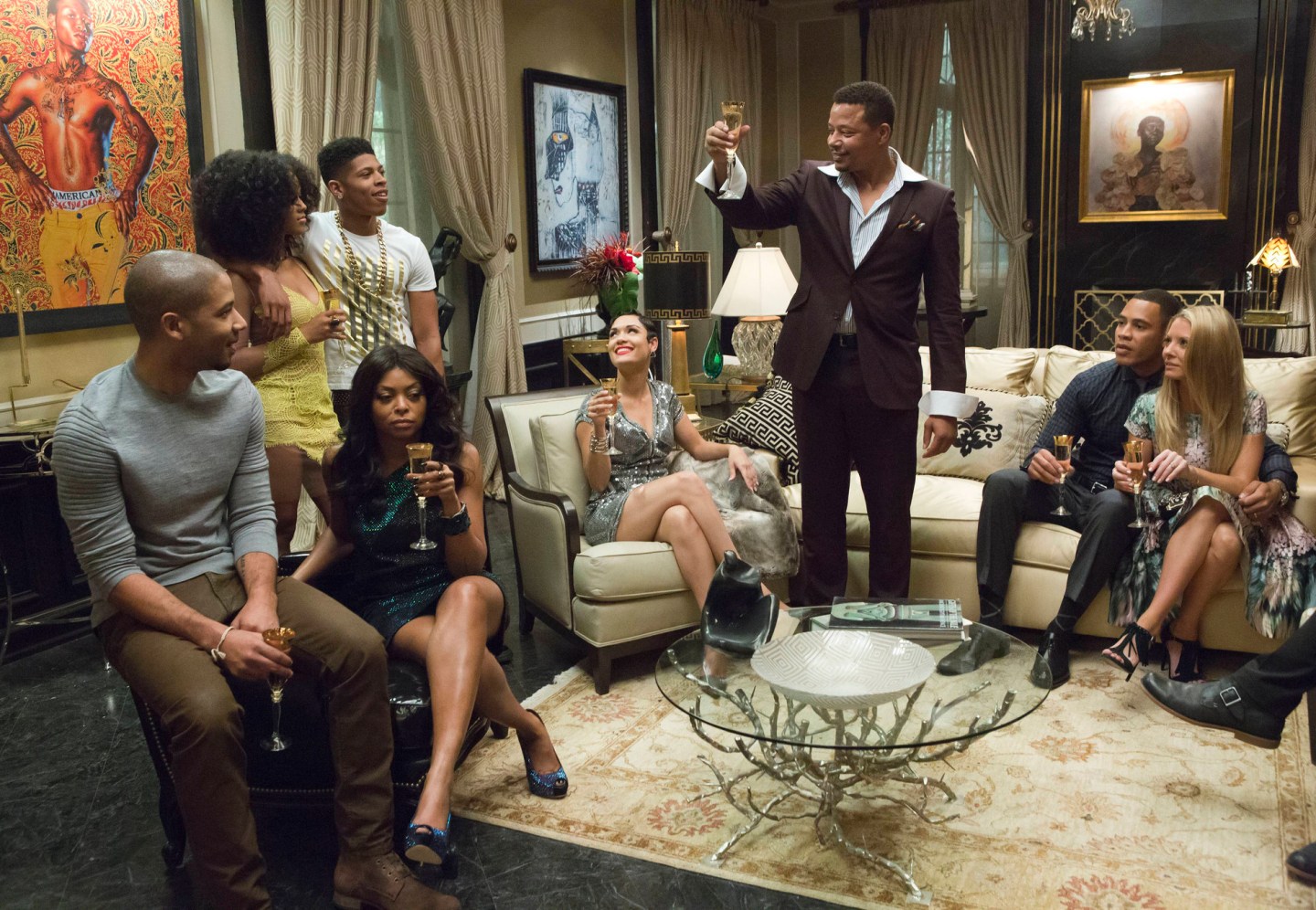 The music industry is notoriously cutthroat, and that has never been more clear than in the new Fox TV show Empire.

The show, created by Lee Daniels and Danny Strong, examines the high-stakes, rival-infested music world. Terrence Howard stars as Lucious Lyon, a drug-dealer-turned-mogul who built Empire Enterprises into a music industry behemoth on the back of his ex-wife’s drug money while she sat in jail. After learning that he has a terminal illness, he decides to divide his business among his three children. Hakeem (Bryshere Gray) is a talented, fame-obsessed slacker, Jamal (Jussie Smollett) is talented as well, driven, and gay, and Andre (Trai Byers) is a Wharton-educated MBA with no musical chops. All of this means to Lucious that none of them is perfect.

As we prepare for the latest episode of the show, which airs Wednesday at 9/8c on Fox, take a look at some of the valuable business lessons that Empire Enterprises should apply in their boardrooms—and what you can use in your own.

While Lyon is eager to take Empire Enterprises public, he should be aware of setting expectations too high and disappointing potential investors. When the EDM-focused music promotions company SFX (SFXE) went public in October of 2013, it had sky-high expectations, which were shattered when the stock price fell below the IPO price of $13 per share (it’s currently trading around $3.50 per share). By some estimates, the company may be able to pay dividends this year, but it’s good to set the bar low for investors—especially in the always-shaky music industry.

In a move that harks back to the primogenitor of old, Lyon has challenged his three sons to battle it out for corporate leadership roles. Lyon knows he will be leaving the company in the next three years and wants to groom a successor and has created the challenge to drive engagement and, for at least one son, foster loyalty. While Lyon’s eldest son, Andre, is Empire Enterprises’ CFO, and has been at his father’s side in the boardroom, Lyon is convinced that his youngest son, Hakeem, has the talent and pedigree necessary to give the company star power. However, Lyon shouldn’t mistake celebrity status for leadership potential—just because Hakeem can rap, doesn’t mean he can run a company. Lyon may want one of his sons to take the helm of Empire, but investors and the board might disagree with putting a young rapper in charge. Plus, instead of pushing Andre out, Lyon should cultivate his son’s Wharton-honed talent, or at least be cautious about making an enemy of his own CFO.

As a music and entertainment company, Empire Enterprises has to figure out how to make a profit in a rapidly-shifting music business landscape. The secret to music business success? Diversity. Take for example, Live Nation (LYV), one of the biggest live entertainment companies. In 2014, it made several bold moves that diversified its business and as a result positioned the company well for the coming year. Not only did it move into artist management by partnering with Maverick, a consortium of managers for acts like U2, Pharrell, and Alicia Keys, but it acquired ticketing service company Eventjoy and acquired C3 Presents, the company behind events like Austin City Limits and Lollapalooza. If Lyon wants to keep Empire competitive and keep investors happy, his company will need to look for ways to expand beyond just putting out records and developing talent.

One of the most heartbreaking storylines on Empire is Lyon’s rejection of his son Jamal because of his sexual orientation. To be successful in the modern corporate world, Lyon should be embracing diversity in the boardroom as a sign of a mature, culturally-aware company. Instead of giving in to his bias, Lyon and other executives should actively work against discrimination in the workplace, address generational differences, and make diversity a business objective. Results can include an improved reputation and brand, and can be a sign to investors that the company is adaptable to an ever-changing environment, which is paramount to success in the evolving music industry.

Plus, while it’s unclear whether Jamal is currently an employee of Empire, if he is fired for being gay, that could be the basis for a big lawsuit — and investors never like those.

CEOs are faced with the task of making dozens of decisions everyday. One of the greatest skills that a leader can learn—and one that is not necessarily taught in business school— is figuring out when to say yes. In Empire, when Lyon’s ex-wife, Cookie, blackmailed him by threatening to go to the SEC with the fact that she was the original investor in Empire Entertainment—and her investment money was fueled entirely by drug deals, he knew not to argue. Despite his misgivings, Lyon said ‘yes’ to her terms, let Cookie take on management of Jamal’s career, and then quickly sent her out the door. While most decisions that CEOs face aren’t as quid pro quo, knowing when to capitulate is a valuable lesson.

As Lyon prepares to take Empire public, he should be prepared to be honest about drug use in the industry, if not drug money. Before SFX went public, the company had to come clean to investors about the fact that illegal drug use at the EDM festivals they run may result in “negative publicity, adverse consequences (including illness, injury or death) to the persons engaged in the illegal activity or others, and litigation against us.” Its prospectus included an action plan including establishing a clear ‘no tolerance’ policy on illegal drug use in or around their facilities, while still making it clear that drug use happens, and it can affect profits. A hip-hop entertainment company built on drug money and currently run by a former drug dealer would probably benefit from a similar level of transparency.

Succeeding in business can involve making tough choices with real-world consequences and sometimes very personal feelings. For example, there are few more difficult situations then when a business leader is faced with letting go of a loyal, long-time employee who knows all the trade secrets. It can be a difficult reality to face, even if that employee has a gambling problem, regularly incurs serious losses, takes loans from the company to pay off his debts, and then shows up at the CEO’s house toting a gun. When faced with that exact situation, Lyon knew that in order to keep his eye on the prize of going public, he needed to cut his losses and make sure the life-long-friend-turned-employee, became an ex-employee, no matter how difficult the decision.

8. Sometimes You Just Have To Do Things Yourself

There are certain tasks that cannot be outsourced, but require a nuanced touch and some face-to-face time. While busy executives frequently want to hire someone to handle their personal affairs, especially the unpleasant ones, some things must be done personally. For instance when Lyon needed to * ahem * bid farewell to his longtime employee, he wanted to give the task the respect it deserved. He took time out of his busy schedule and did it himself. The employee appreciated that Lyon put in the effort, even if he may not have appreciated the result.

Watch more of the latest news about IPOs from Fortune’s video team: