With technology, a step toward restoring sight 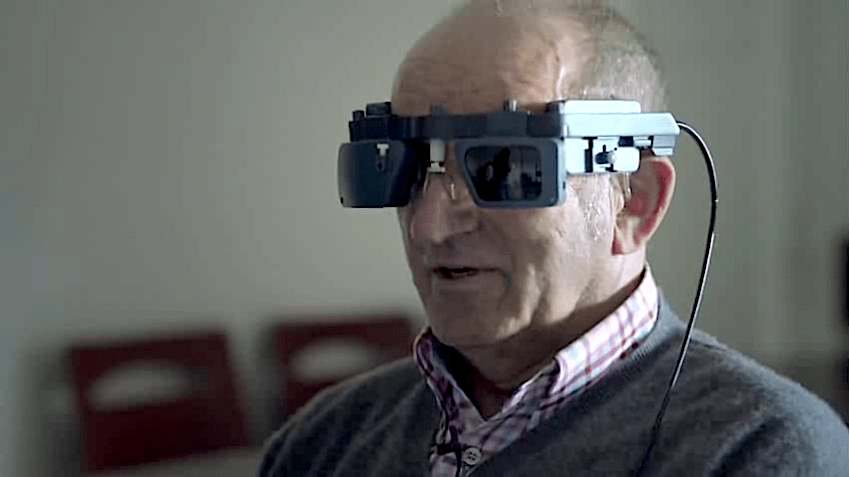 More than half a century ago, when he was just 18 years old, Georges* learned that he had retinitis pigmentosa. He was told that his vision would progressively deteriorate until he was blind. As predicted, when Georges reached his early fifties, his world went completely dark. Last year, at the push of a button, Georges suddenly saw light again. “When they got the electrodes going, it was a real fireworks show,” he exclaims.

Georges is part of a pilot program testing Iris, a product to restore vision to blind people, made by a young French company called Pixium Vision. The company’s founder, Bernard Gilly, is a scientist-turned-entrepreneur with a network of businesses focused on using technologies to improve human health, mostly around the nervous system.

“Ophthalmology seemed like a good way to approach the central nervous system because the eye, and especially the retina, is like a visible part of the brain,” Gilly says, noting that France counts 200,000 people in the country who are blind or nearly blind, and that generally there is no cure. “People are unaware of how prevalent the condition is because there are not many blind people in the streets. They are more prone to accidents, so they tend to stay home.”

Technological advances such as microbiology and microelectronics are creating new opportunities to restore sight, Gilly says, and scientists are making enormous strides in understanding the workings of the brain. It’s long been known that electricity can stimulate the nervous system, and a technique called “neuromodulation” is being used to address everything from Parkinson’s disease to chronic pain. Now, it can treat blindness, too.

The best candidates for Iris are patients with degenerative eye conditions. A surgeon implants a tiny silicon chip with 150 electrodes on the retina. Afterwards, the patient wears a pair of dark glasses with an integrated video camera that sends images to a portable mini-computer. This computer transforms the pictures into digital signals, which are sent back to the glasses, then transmitted wirelessly to a receiver on the implant. Pulses activate the electrodes, and the optic nerve carries the images to the brain.

After surgery, patients follow a program of rehabilitation to teach their brains how to interpret these new images. What they see is basic shapes in variations of black, white, and gray. (The resolution is still too low for them to distinguish facial features or read.)

“We don’t give them back their sight, but another way of seeing,” says Yannick Le Mer, the surgeon who implanted the system in three of Pixium’s test subjects. Le Mer says it is impossible to know beforehand how anyone will react, since it depends on each brain’s adaptability—like learning to play the piano or speak Japanese. Some catch on immediately, while others struggle.

One recent autumn day, Georges, a small, soft-spoken man, traveled from his home in Brittany to the Quinze-Vingts hospital in eastern Paris. A young therapist named Alexandre Leseigneur was waiting for him, and the two spent the day together practicing using the system in the corridors. (The glasses were not yet available for practice at home.)

Georges put the glasses on and hung a strap with the computer over his shoulder. The first time they went into the hallway, he moved hesitantly, shuffling sideways and reaching out his hand. “The flashes are too bright. I’m lost,” he said. Leseigneur plugged the glasses into a laptop computer, adjusted the settings, and they went out again. This time was better. Following a black band on the floor, Georges walked the length of a corridor and even managed to avoid an obstacle blocking his path.

Gilly estimates that when the Iris arrives on the European market in late 2015, the cost to each patient will be around 100,000 euros, plus surgery. Though that might sound expensive, he says it’s a bargain compared to the price of blindness. A study at the University of Chicago forecasts that in the United States alone, costs related to eye disease and vision problems will reach $717 billion by 2050.

Last June, Pixium made an initial public offering, raising nearly 40 million euros (more than $53 million) from European investors. It is not the only company working in this field. Various permutations of what is commonly called a “bionic eye”—Gilly dislikes the term—are being developed from Germany to Australia. The pioneer is an American company, Second Sight Medical, which earned European approval for its Argus II system in 2011 and FDA approval in 2013. In November, Second Sight had its own successful IPO, raising some $32 million.

While the Iris is very similar to the Argus II, Gilly mentions a few key differences. His camera, for example, captures only the changes in the environment, so that the overall view is continuous, closer to the way the human eye actually sees. The implant can also be easily removed and replaced with upgrades as they become available.

The company’s next generation product, Prima, will start clinical trials in 2016. With at least 10 times as many electrodes, it should enable people to read and to see facial features. “Patients tell us that what they want first is autonomy and safety,” says Gilly. “After that, they want to be able to recognize their loved ones, to see their spouses or their grandchildren.”

Since this is synthetic vision, the possibilities are vast. Soon the technology will permit users to see as clearly at night as during the day. A future device might be able to transmit the contents of an e-book or a movie directly to the retina. For now, Le Mer says, the goal is simply to help someone locate a door in a room. “It seems modest, but it’s huge.”

Georges agrees. He tells about how not long ago he was taking a walk near his home. “There was a truck parked across the sidewalk. My cane slipped under it, so I didn’t know it was there, and I smacked my head. If I had been using this system, I would have seen it.”