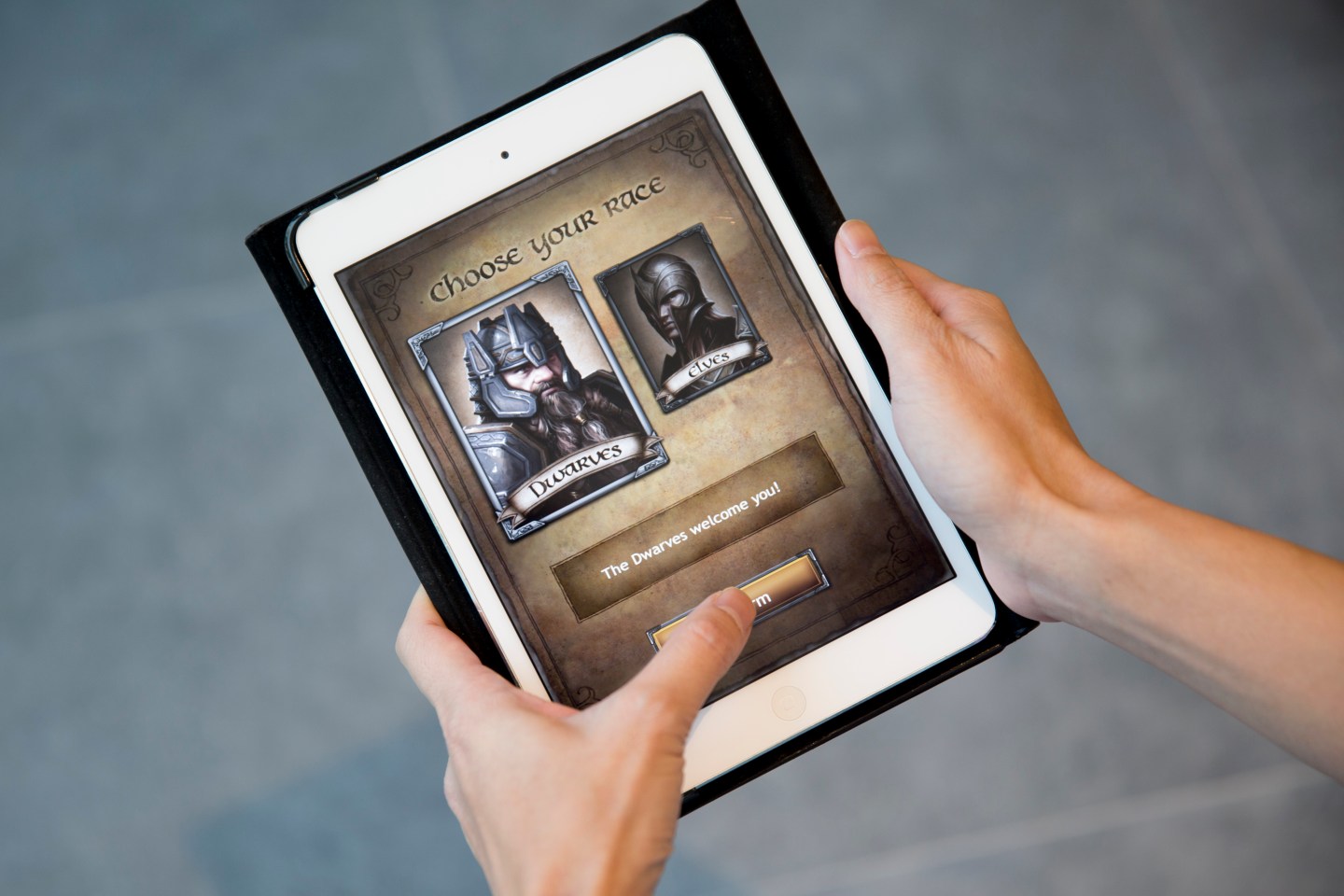 A setup screen for The Hobbit: Kingdoms Of Middle-Earth, developed by Kabam Inc., is displayed on an Apple Inc. iPad Mini in an arranged photograph in Hong Kong, China, on Friday, Aug. 1, 2014. Kabam, a producer of games for mobile devices, received a $120 million investment from Alibaba Group Holding Ltd. as part of a plan to distribute titles like Lord of the Rings in China. Photographer: Brent Lewin/Bloomberg via Getty Images
Photograph by Brent Lewin — Bloomberg/Getty Images

The mobile video game industry continues to ride a growing wave of free-to-play and casual game successes such as Supercell’s Clash of Clans and Rovio Entertainment’s Angry Birds Transformers. Consumers are spending so much time—and money—playing games on smartphones and tablets that Newzoo, a video game research firm, has had to raise its 2014 global revenue forecast from $21.7 billion to $25 billion. The new total is a 43% increase over mobile game revenues recorded for 2013.

Peter Warman, Newzoo’s chief executive, says the mobile market growth isn’t limited to a specific market. Both “mature” Western markets and emerging markets showed rapid growth in 2014. In North America, the market is now expected to grow 51% year over year; Western Europe is expected to grow by 47%. For the fastest growth, though, look East to emerging markets in Southeast Asia and China—the latter of which is up 86%. Japan is also seeing strong growth in iOS and Android game revenues, but the overall market remains level as traditional feature phone game revenues collapse.

“Despite a widely reported slump in new tablet unit sales, game revenues on tablets are growing faster than smartphones, cementing the position of tablets as a key gaming device,” Warman says. “Smartphones and tablets have given gamers two new screens to play games on in addition to their TV and PC screen. Because U.S. consumers use all four screens, mobile gaming does not replace console or PC gaming. Moreover, it gives gamers the possibility to play games anywhere at any time, pushing overall time spent on games in the U.S. up 40% in only two years.”

Industry executives see these usage shifts as creating room for new, non-cannibalizing revenue growth for the mature U.S. mobile gaming market. Time spent playing mobile games ultimately converts to money spent—even if those dollars are migrating from PC or console games. “Initially, online casual and social network games suffered revenue losses because of mobile games growth,” Warman says. “This year for the first time we see signs that it is taking its toll on the global growth of PC and console gaming.”

“Playing games on the TV or PC will not disappear,” says Vincent van Deelen, market analyst at Newzoo. “They are different screens, each with their own right of existence. What we see happening now is that money spent on games is gradually being spent more equally across all four screens. Ultimately this could be 25% for TV, 25% for PC, 25% for tablets and handhelds, and 25% for phones. In the U.S., the percentages are 44%, 26%, 15%, and 15% respectively. On a global scale, the split is closer to the theoretical situation: 28%, 39%, 13%, and 20%. Time spent on games has already shown a close-to-equal split across screens for years.”

The continued growth of mobile game revenues will put Google (GOOG) and Apple (AAPL) in the top five public companies by game revenues in 2015, thanks to their 30% commission on all games sold in their app stores, Warman says.

This shift in power has catapulted Apple to the top of the video game ecosystem. Newzoo reports that Apple’s App Store remains by far the biggest single platform in the mobile industry, accounting for about half the mobile games market revenues in 2014. Google Play is a close second.

“We estimate that Apple and Google will earn close to $4 billion and $3 billion respectively in games revenues in calendar year 2014, explaining the fast growth in Google’s ‘other revenues’ in its recent quarterly results,” Warman says. “To put this into perspective, Nintendo’s game revenues amounted to $2.4 billion last year and will likely be slightly lower this year. Other app stores likely to grab a significant market share in Android games include Amazon and several Chinese stores such as 360 Mobile Assistant, Tencent’s MyApp, Baidu Mobile Assistant, and Xiaomi’s MIUI.”

Many traditional game publishers have invested heavily in mobile games, or at least launched console games across mobile devices. Those companies that made the early investment will reap rewards in the coming years as mobile continues on its upward rise. Newzoo forecasts global mobile revenues will top $40.9 billion by 2017.

“Electronic Arts has gone through the changes required to be successful on the mobile screens and run games as a service and is showing great results with a nice balanced portfolio,” Warman says. “Activision has taken a less experimental approach over time and decided to focus on Skylanders, Call of Duty, World of Warcraft, and getting Destiny out there. I think the success of Hearthstone: Heroes of Warcraft will spark more mobile activity in the coming years. Destiny could well be known as the last global blockbuster launched in the ‘traditional’ way. The pressure put on initial feedback from players, and the marketing dollars required to put that game in the market is not something any company would like to repeat.”

Activision invested $500 million in a 10-year plan for Bungie’s Destiny, but has yet to release any sales data for the game. The console and PC games business transitioned years ago to releasing a smaller amount of games, most of which are franchise sequels. Even with an installed base of 101 million Wii units, 80 million PlayStation 3 systems, 80 million Xbox 360 consoles, 13 million PlayStation 4 machines, 7 million Xbox One units, and 7 million Wii U systems, the console business can’t compete with the sheer billions of smartphone and tablet users around the world.

“Practically everyone in mature markets now has a smartphone and the majority has access to a tablet,” van Deelen says. “In emerging markets, the smartphone is often their first device that is connected to the Internet. With an installed base of billions, the audience is enormous on a global scale. A console is not a must-have device like smartphones, and in a growing number of cases, tablets are. Mobile devices, which aren’t purchased to play games on, introduce new consumers to games.”

The ability for developers of all sizes to publish on app stores like Google’s Play and the Apple’s App Store has allowed creativity to flourish. Instead of Sony, Microsoft, or Nintendo deciding which games see the light of day on their closed platforms, consumers are able to more broadly choose with their downloads and dollars.

“This app store ecosystem allows developers to continuously improve and expand their game in terms of gameplay and business model,” Warman says. “It has accelerated the shift from games developed as a product to games run as a service—a change that requires a different organization than traditional publishers had in place. This is why new players such as Supercell and Kabam have popped up as winners while many traditional large companies have struggled to change—and, in some cases, did simply not believe the mobile market was as large as some analysts told them. Now, they are back up to speed and reaping the benefits.”