Fortune’s 8 most extreme foods of the year 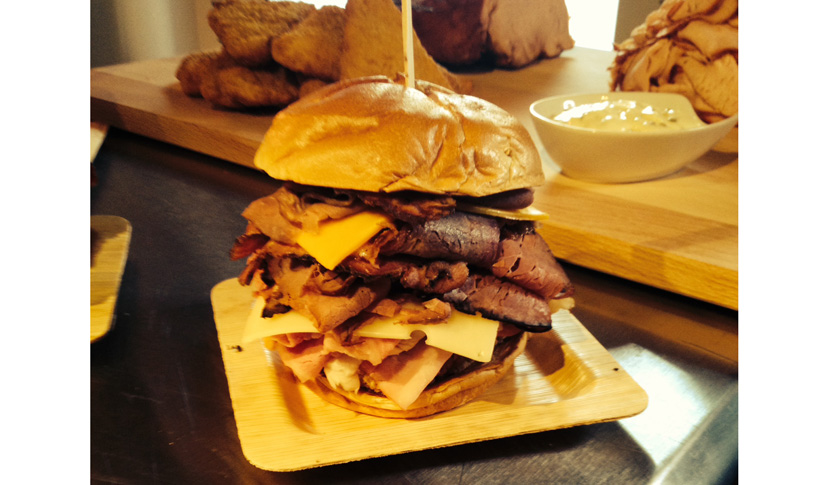 Welcome to Fortune‘s second annual list of the most extreme new food items of the year (restaurant division). If these inventions are any indication, U.S. chains have grave doubts about customers’ abilities to manage a sandwich and a side dish: More and more, they’re just piling everything into one giant, stomach-stretching, multi-level construction.

There’s been a rise in chains claiming to sell higher-quality burgers, so putting an extreme version on the menu was one key way that older brands differentiated themselves in 2014. And the burger is a great platform for creativity. “It’s easy to test new ‘wow factor’ foods in a category that most people are comfortable with to begin with,” says Lizzy Freier, who tracks extreme foods, among other things, at industry research firm Technomic.

Burgers weren’t the only area for experimentation. The year saw boundaries pushed, or even broken, around burritos, milkshakes, and doughnuts. Depending on your tolerance for the outlandish, prepare to be either ravenous—or grossed out.

The Hella-Peño Burger from Jack in the Box

Jalapeño poppers are a common side for burgers, so Jack in the Box (JACK) decided to save its customers a step by putting the bite-sized snacks right on top of the beef patty. The resulting Hella-Peño Burger—garnished with a generous portion of stuffed and sliced jalapeños, cheese, and taco sauce—launched in June and is served in all of Jack's 2,200 restaurants. The burger is part of its late-night menu—the company promotes its "munchie" meals—apparently targeted at, er, high-spirited consumers. Don't worry, though: You can order all 760 calories of it any time of day.

The Quesarito from Taco Bell

Taco Bell has become famous for its mashups thanks to offerings like the the Waffle Taco (a waffle filled with scrambled eggs and sausage) and Doritos Locos Tacos (with a shell made out of Nacho Cheese Doritos). The chain continued its run in 2014 with the Quesarito, the perfect meal for those who are plunged into agonies of indecision when forced to choose between a quesadilla or burrito. The Quesarito is essentially a burrito (beef, shredded chicken, or steak) wrapped in a cheese quesadilla. It launched at Taco Bell’s nearly 6,000 locations in June. The Quesarito beat out the beloved Nacho Cheese Doritos Locos Tacos to become the best-selling product that the company has ever put into test market.

Mashers from Carl’s Jr. and Hardee’s

Sister brands Carl’s Jr. and Hardee’s, both owned by CKE Restaurants, stretched the limits of what’s fair game for a burger topping when they tested Mashers over the summer in Carl’s Jr. locations in Southern California and Hardee’s in the St. Louis area. The brands offered a single burger, double burger, Black Angus Thickburger, or Big Chicken fillet topped with garlic mashed potatoes and crispy garlic pepper onion straws. They even have a soupcon of sophistication, with truffles added to their gravy. Sadly for mashed potato fans, the company doesn’t have any immediate plans to roll out Mashers nationally. A Big Chicken Masher weighed in at 900 calories and 47 grams of fat; the Burger Masher single patty was a more modest 600 calories and 26 grams of fat.

Runner Up: The company’s Texas BBQ Burger, a beef patty on top of brisket.

The Frank-N-Burger from Wayback Burgers

The Cheshire, Conn.-based chain offers a limited-time-only burger across its 86 locations every month. In October, in honor of Halloween, the 24-year-old company proclaimed that it had “created a monster” with its Frank-N-Burger. It took the humble burger to a scary new level, layering hotdogs between two meat patties topped with cheese, and finishing it off with house-made barbecue chips. It topped out at 890 calories.

The BurHEATo's origin story begins with PuckerButt Pepper Company in Fort Mill, S.C.—right across the state line from Salsarita’s in Charlotte—creating what the Guinness Book of World Records has certified as the world’s hottest chili pepper, the Carolina Reaper. The two companies partnered, and Salsarita’s tested the BurHEATo last February in its hometown market and ran it as a limited-time-offer at all of its 78 locations over the summer. Each BurHEATo was served with a card warning customers that the pepper is 300 times hotter than a jalapeño, and a pair of gloves so the sauce wouldn't get on diners' skin.

You would have missed this one unless you happened to drop by New York’s State Fair in Syracuse in August and September. Tim Hortons restaurant owner Anthony McEachern created the Buffalo Crunch Donut exclusively for the event. The doughnut was dipped in hot sauce, topped with spicy crushed kettle chips, and had a fiery hot sauce or a tangy option for spice wimps. Despite its very limited offering, Buffalo Crunch hysteria almost matched that of the Cronut, the famous croissant-doughnut hybrid.

Red Robin finally executed what we’ve all been thinking: The best mix-in for ice cream is obviously wine. The casual dining chain offered the Mango Moscato Wine Milkshake from March until the beginning of June, and the Divalicious Red variety from November until Jan. 4 (sorry, you just missed it). There was also some vodka thrown into the mix along with the wine and vanilla softserve. My colleague Caroline Fairchild reported in March that Red Robin created its master mixologist role in 2012 to help boost alcohol sales. Donna Ruch, who was hired for the position, had her first hit with a beer milkshake made with Sam Adam’s Oktoberfest. It was mostly popular with men, so Ruch branched into wine to attract a bigger female audience. After you've had a few, you can go and sample Jack in the Box's late-night menu.

The Meat Mountain is what happens when you decide to put every meat on the menu on one sandwich. This monster from Arby’s entails three half-strips of pepper bacon, a slice of cheddar, roast beef, Angus steak, brisket, corned-beef, a slice of Swiss, ham, roast turkey, and two chicken tenders. After the Washington Post reported on the "secret" menu item in August, the company started selling 3,000 per day in the weeks that followed. It’s great value at about a penny a calorie ($10, some 1000 calories). Media reports have stated that Arby's has struggled to fit the sandwich into their boxes; no word on what happens if you try to fit it into your stomach.