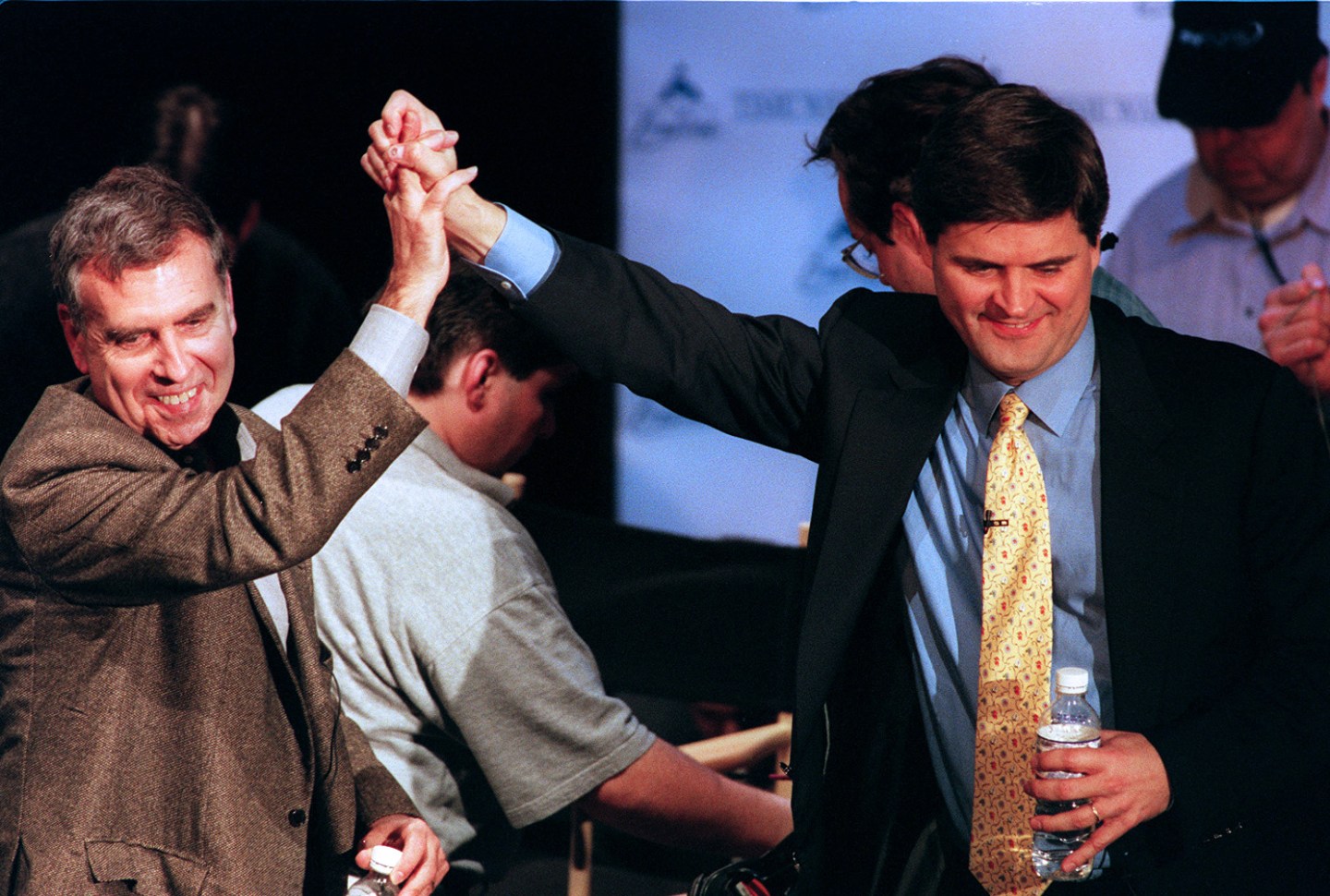 FILE -- Gerald Levin of Time Warner, left, with Stephen Case of America Online, announcing A.O.L.'s $165 billion deal to acquire Time Warner in January 2000. Time Warner said on Thursday, May 28, 2009, that it would file for divorce in one of the most ill-fated marriages in the history of the media and technology business, its 2001 merger with AOL. The companies hope the separation is complete at the end of the year. (Ruby Washington/The New York Times)
Photograph by Ruby Washington — The New York Times/REDUX

The landscape of mergers and acquisitions is littered with business flops, some catastrophic, highly visible disasters that were often hugely hyped before their eventual doom. Today marks the 15th anniversary of one such calamity when media giants AOL and Time Warner combined their businesses in what is usually described as the worst merger of all time. But what happened then will happen again, and ironically for the exact same reasons.

A lot of people thought that the merger was a brilliant move and worried that their own companies would be left behind. At the time, the dot-coms could do no wrong, and AOL (AOL) was at the head of the pack as the ‘dominant’ player. Its sky-high stock market valuation, bid up by investors looking for a windfall, made the young company more valuable in market cap terms than many blue chips. Then CEO Steve Case was already shopping around before the Time Warner opportunity came up.

On the other side, Time Warner anxiously tried, and failed, to establish an online presence before the merger. And here, in one fell swoop, was a solution. The strategy sounded compelling. Time Warner (TWC), via AOL, would now have a footprint of tens of millions of new subscribers. AOL, in turn, would benefit from access to Time Warner’s cable network as well as to the content, adding its layer of so-called ‘user friendly’ interfaces on top of the pipes. The whole thing was “transformative” (a word that gets really old really fast when reading about this period). Had these initial assumptions been borne out, we might be talking today about what a visionary deal it was.

Merging the cultures of the combined companies was problematic from the get go. Certainly the lawyers and professionals involved with the merger did the conventional due diligence on the numbers. What also needed to happen, and evidently didn’t, was due diligence on the culture. The aggressive and, many said, arrogant AOL people “horrified” the more staid and corporate Time Warner side. Cooperation and promised synergies failed to materialize as mutual disrespect came to color their relationships.

A few scant months after the deal closed, the dot com bubble burst and the economy went into recession. Advertising dollars evaporated, and AOL was forced to take a goodwill write-off of nearly $99 billion in 2002, an astonishing sum that shook even the business-hardened writers of the Wall Street Journal. AOL was also losing subscribers and subscription revenue. The total value of AOL stock subsequently went from $226 billion to about $20 billion.

The business was up against a phenomenon I refer to as transient advantage; namely when a combination of capabilities that at one point made a firm a leader, erodes and is replaced by the next form of competitive advantage. AOL was indeed the king of the dial-up Internet world, but that world was rapidly being supplanted by always-on, much faster broadband. At the time of the merger, half the country had Internet access, yes, but only 3% had broadband. AOL’s business model – originally based on payment for usage and subsequently for a monthly subscription – was about to implode. The eventual divorce of the two businesses was inevitable.

This leads me to a cautionary note about today’s crop of digital darlings, many valued in the billions. According to the Wall Street Journal, there are at least 48 venture-capital backed companies with an implied value of over $1 billion, while the number of such companies peaked at 10 during the height of the 2000 dot-com boom. Moreover, these firms – not yet profitable, not yet stable and not yet assessed by normal market metrics – are burning through vast amounts of cash each month.

As Berkeley University’s Steven David Solomon observed, even old ideas (think grocery delivery!) are being recycled in what he describes as a “frenzy” of investors pursuing startups seemingly at any price. Uber, for instance, has a valuation of $41 billion, even though total taxi revenue in the United States is about $11 billion a year.

Billion dollar acquisitions of these young firms and the desperation of venture capitalists to be part of the next Whatsapp acquisition or Facebook or Twitter IPO have created exactly the kind of pressures that can cause them to redouble their investments, hoping that the beneficiaries will be “the” category leader and shut everyone else out. One or two of the new crop of hot startups may well accomplish this, but the reality is that most of them won’t.

So if you’re an investor excited about the prospect of potential new business combinations, take a few minutes to check out this all-too common recipe for failure:

Put these ingredients together and the result is often toxic. My advice: It’s much better to take a look at the assumptions behind that “transformative” startup before diving in head first with your checkbook.

Rita Gunther McGrath is a professor of business strategy at Columbia Business School and author of The End of Competitive Advantage: How to Keep Your Strategy Moving as Fast as Your Business.