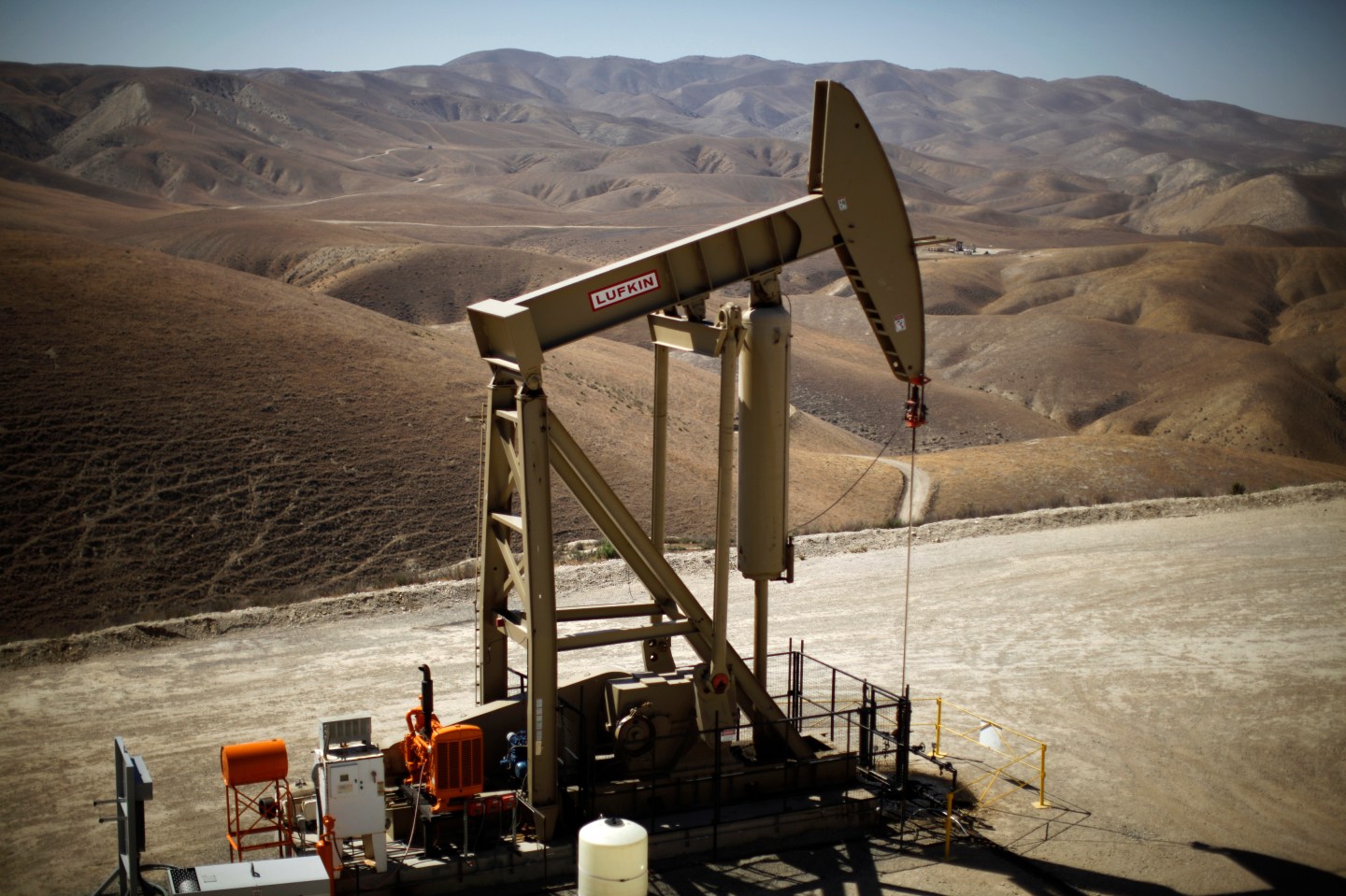 A pumpjack brings oil to the surface in the Monterey Shale, California, April 29, 2013. The vast Monterey shale formation is estimated by the U.S. Energy Information Administration to hold 15 billion barrels of technically recoverable oil, or four times that of the Bakken formation centered on North Dakota. Most of that oil is not economically retrievable except by hydraulic fracturing, or fracking, a production-boosting technique in which large amounts of water, sand and chemicals are injected into shale formations to force hydrocarbon fuels to the surface. Picture taken April 29, 2013. REUTERS/Lucy Nicholson (UNITED STATES - Tags: BUSINESS ENERGY) - RTXZ5IU
Photograph by Lucy Nicholson — Reuters

With a global supply glut sending prices for crude plummeting, U.S. oil drillers are pulling up stakes as if fleeing a blown out well.

The number of active oil rigs in the U.S. fell by 61, to 1,750, last week, according to the latest rig count from oilfield services company Baker Hughes. It was the largest weekly decline since February 1991 and it comes after more than six months of steadily declining oil prices.

Crude oil prices have dropped 55% since last summer and are at their lowest level since 2009 thanks to worldwide oversupply driven, in part, by the U.S. shale boom as well as declining consumption in China and Europe. Prices fell again on Friday and have remained under $50 per barrel for much of the year, taking a major financial toll on the energy industry as a whole.

In recent months, more and more oil drillers have announced plans to scale back their oil production as a result of the glut. Both Dallas-based Matador Resources and Houston’s Sanchez Energy said this week that they are scaling back spending and drilling in the Texas Eagle Ford shale field due to the ongoing decline in oil prices. Meanwhile, Bloomberg reported this week that contract drillers Helmerich & Payne and Pioneer Energy Services both said they have had clients opt to terminate drilling contracts earlier than expected, while Canadian oilfield services company Ensign Energy Services plans to lay off as many as 700 workers in California.

The dark picture is complicated a bit by conflicting data showing the industry may be bottoming out.

And, it appears that oil companies continue to hire new employees despite the slowdown in production. Friday’s monthly employment report showed an increase in the number of oil and gas drilling jobs last month, as 400 positions were added in December. The industry currently employs almost 12,000 more people than it did at this point last year.