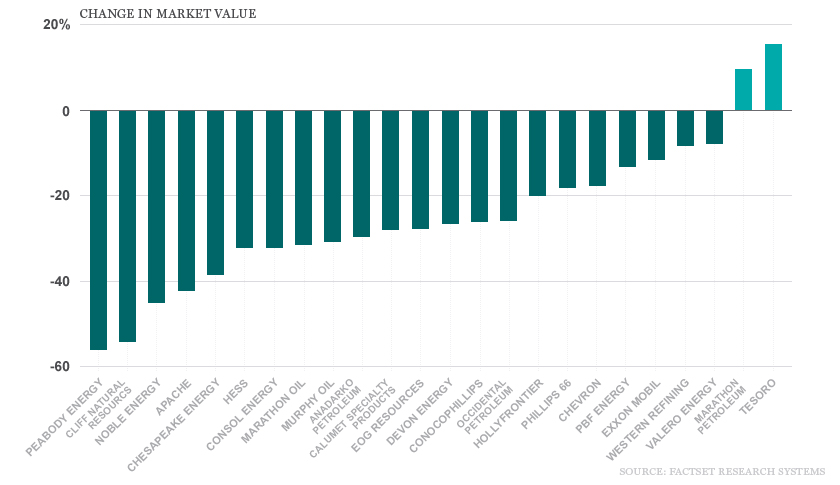 It has been a pretty rough six-month stretch for the energy industry. Crude oil prices have fallen about 55% since the middle of last summer, resulting in some of the world’s largest energy companies losing hundreds of billions of dollars in market value.

The price of crude oil has been relatively flat over the past two days, but it still sits below $50 per barrel — the lowest point in about 5 and 1/2 years — thanks to a global supply glut exacerbated by the ongoing U.S. shale boom as well as decreased oil consumption in Asia and Europe.

As oil prices have steadily declined, so too have the share prices of many large energy companies. Out of 24 oil, gas and coal producers in the Fortune 500, 22 saw their stock price decline between the beginning of July 2014 and Wednesday’s close. In total, the 24 companies lost more than $263 billion in market value combined, according to data from FactSet Research Systems. (A company’s market value is found by multiplying its share price by the number of its shares outstanding.)

Exxon Mobil (XOM) and Chevron (CVX), the two largest U.S. energy companies, accounted for more than $95 billion of that figure as the two have seen their respective market values decrease by 11.7% and 17.9% in just over six months.

In terms of total lost market value, ConocoPhillips (COP) and Occidental Petroleum (OXY) finished behind Exxon and Chevron, with more than $20 billion shaved off each of their respective market caps during the period — a 26% decline.
[fortune-brightcove videoid=3953204453001]

Only two of the qualifying companies on the Fortune 500 list actually improved over the past six months: Marathon Petroleum (MPC) and Tesoro (TSO), both of which are oil refiners who benefit from lower crude prices.

Meanwhile, even coal producers have not been immune to the energy sell-off, as both Peabody Energy (BTU) and Cliffs Natural Resources (CLF) have seen their market values drop by more than half since July. And, Halliburton’s (HAL) 44% stock dip since last summer is one example of how ancillary companies in the energy industry have been hit hard as well.

What’s more, the energy industry’s woes are likely far from over. While the broader stock market has rebounded sharply over the past two days, oil prices have yet to show significant improvement. In fact, some analysts see prices hitting $40 per barrel at some point in 2015 as oversupply in the global oil market shows little sign of abating.