What you need to know about falling oil prices 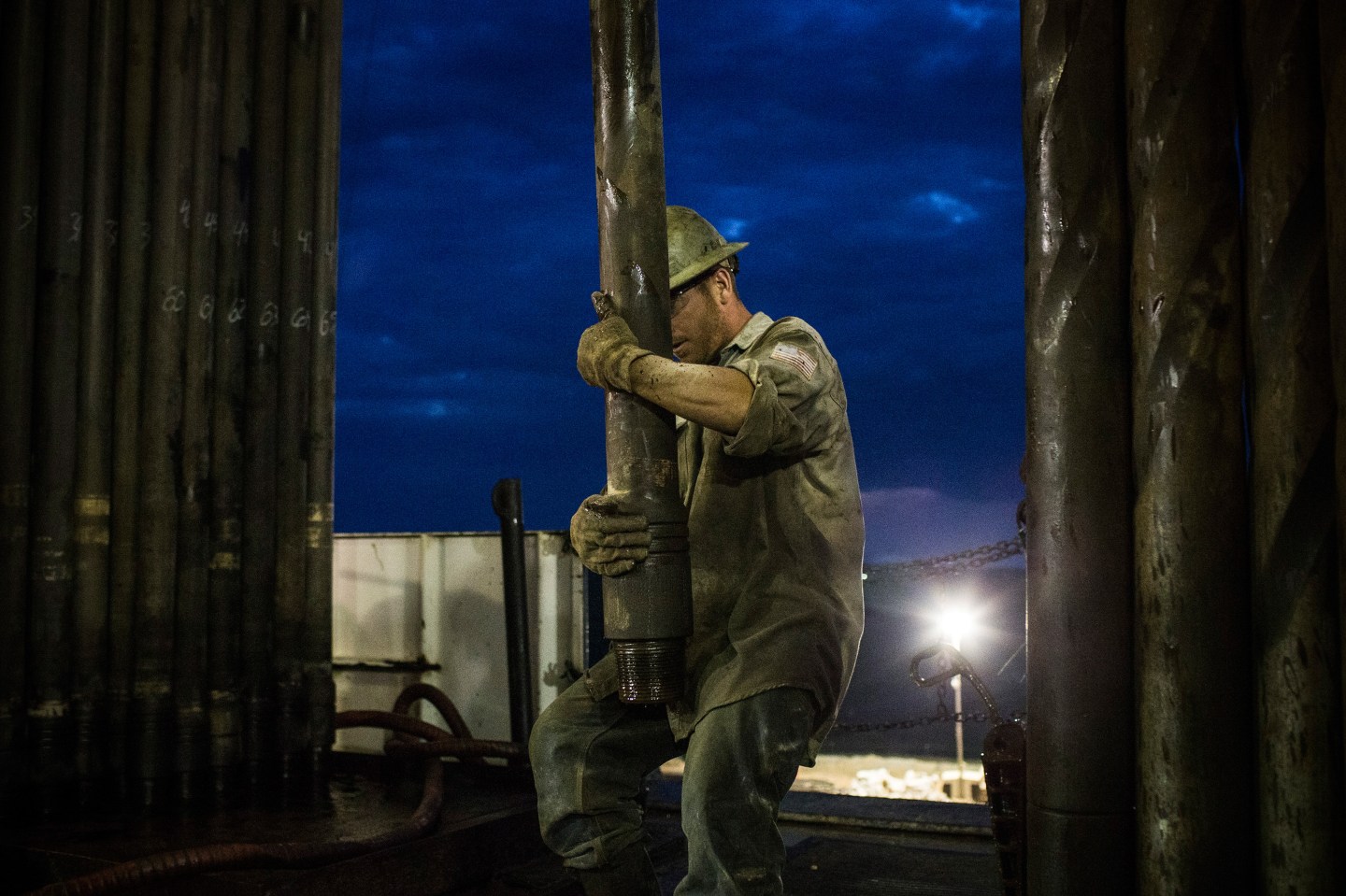 WATFORD CITY, ND - JULY 28: Scott Berreth, a derrick hand for Raven Drilling, works on an oil rig drilling into the Bakken shale formation on July 28, 2013 outside Watford City, North Dakota. North Dakota has been experiencing an oil boom in recent years, due in part to new drilling techniques including hydraulic fracturing and horizontal drilling. In April 2013, The United States Geological Survey released a new study estimating the Bakken formation and surrounding oil fields could yield up to 7.4 billion barrels of oil, doubling their estimate of 2008, which was stated at 3.65 billion barrels of oil. Workers for Raven Drilling work twelve hour days fourteen days straight, staying at a camp nearby, followed by fourteen days. (Photo by Andrew Burton/Getty Images)
Photograph by Andrew Burton — Getty Images

It’s looking like Monday’s spike in oil prices was little more than a blip.

The price of oil fell again on Tuesday after experiencing a brief rebound to start the post-holiday week. Crude oil prices gained as much as roughly 4% yesterday, rebounding from five-year lows, before falling again today. Prices for Brent crude oil are recently down about 2.3%, to $70.83, while West Texas Intermediate (WTI) is down 1.8%, to $67.26.

Oil prices are down sharply this year, losing over 30% of their value since hitting a summer peak.

Why are prices dropping?

Put simply, global oil supplies are exceeding demand and driving down prices in the process. A major factor has been the explosion in U.S. oil production, which is up to almost 9 million barrels per day and expected to hit the highest levels in four decades next year.

Another factor is the struggling economies in Asia and Europe leading to a decrease in oil consumption. China, one of the world’s largest oil consumers, has seen its economic struggles result in its demand for oil being outpaced in Asia by India, a country that has also struggled financially of late. Saudi Arabia also cut the price of its own crude to the U.S. earlier this month, which has further propelled the sell-off.

Meanwhile, oil futures were hit especially hard late last week by a decision by the Organization of Petroleum Exporting Countries (OPEC) not to adopt additional measures to tackle oversupply issues. OPEC, the cartel responsible for one-third of global oil production, said it would keep its self-imposed output ceiling at 30 million barrels per day. The announcement subsequently sent already-low oil prices down even further as OPEC’s maintained quotas will do nothing to lower overall oil output to a point that is consistent with global demand for the cartel members’ oil, which the International Energy Agency estimates at just above 29 million barrels per day for next year.

How far have prices dropped?

Prices have fallen steadily throughout the second half of 2014, declining from mid-summer highs above $100. Oil dropped below $70 per barrel for the first time since May 2010 last week and have continued their decline this week. Brent crude has dropped 37% since the summer and fell nearly 12% over the past week in the wake of the OPEC quota announcement. Similarly, WTI is down 34% over the past five months and the oil’s price has dropped by roughly 12% since last week.
[fortune-brightcove videoid=3841028261001]

Who are the biggest losers?

Energy companies’ stocks have been punished throughout the ongoing drop in oil prices as Exxon Mobil (XOM) and Chevron (CVX) have each lost around 6% in share value over the past six months. Transocean’s (RIG) stock has hit its lowest point in nearly two decades, while Halliburton’s (HAL) shares have lost almost 40% of their value since June.

Continental Resources’ (CLR) stock has also dropped dramatically, about 43% in six months, with CEO Harold Hamm seeing his personal wealth decline by about $12 billion in the past few months, according to Bloomberg. The billionaire has had a rough year, including divorce proceedings in which he was recently ordered to pay his ex-wife nearly $1 billion in a settlement.

Meanwhile, the Russian economy has been hit especially hard by plummeting oil prices and the country is now publicly acknowledging the likelihood that it will enter a recession in 2015. On Monday, Russia’s ruble suffered its largest one-day dip in value — nearly 9% — since 1998.

What about the winners?

Well, the plunging oil prices are having one very noticeable benefit: the lowest gas prices in years.

The average price for regular gas at pumps across America over Thanksgiving weekend was about $2.80 — the lowest in four years and 50 cents below last year’s average, according to AAA. Some states are even likely to see prices below $2 per gallon. Happy drivers took to Twitter to express both surprise and pleasure at pump prices:

Idk what's prettier that sunrise or those GAS PRICES! pic.twitter.com/FUkJ01NoQf

2.76 per gallon 😭 gas prices are so beautiful right now. pic.twitter.com/ozx1DMjCpg

What the huge drop in gasoline prices means for America http://t.co/aozAOZ26fo pic.twitter.com/LPiEm1do9Y

Cheap fuel is a blessing for travelers — with more hitting the roads over the holiday — and for retailers, with traditional logic suggesting that low gas prices are a boon to consumer spending. (It may not have helped enough, though, as the National Retail Federation estimated that spending was off by 11% for the four-day holiday weekend.)
[fortune-brightcove videoid=3899758707001]

Christine Lagarde, head of the International Monetary Fund, thinks falling oil prices could provide a boost to the global economy on the whole. Lagarde said this week that exporters will be hurt, but many other countries will be helped by reduced spending on their own oil needs.

The U.S. energy boom — what’s behind it?

U.S. oil production has increased by about 80% over the past six years, from 5 million barrels per day in 2008 to 9 million per day this year. The U.S. energy resurgence is riding a shale boom in states such as North Dakota, Ohio, Pennsylvania and others where oil companies use the technique known as “fracking” to extract oil from shale rock formations deep beneath the earth’s surface. With that boom, the U.S. is contributing more oil to the global supply, resulting in a glut as demand has failed to keep up with production.

There seem to be dissenting opinions on whether or not falling oil prices will spell the end of the shale boom in the U.S., as oil producers may start to scale down expansion plans and drilling activity for 2015 and beyond if oil demand continues to diminish. Earlier this fall, analysts told Fortune that oil companies would likely start rethinking their plans should prices stay below $80 a barrel for a period longer than a few months. Some companies, including Continental Resources and Denbury Resources (DNR), have already announced scaled back plans for 2015.

However, lower oil prices don’t necessarily spell doom for the U.S. shale boom, as Fortune today pointed out that factors such as the industry’s efforts to improve efficiency in the production process should help companies continue to grow even with weaker demand.