The shale oil revolution is in danger 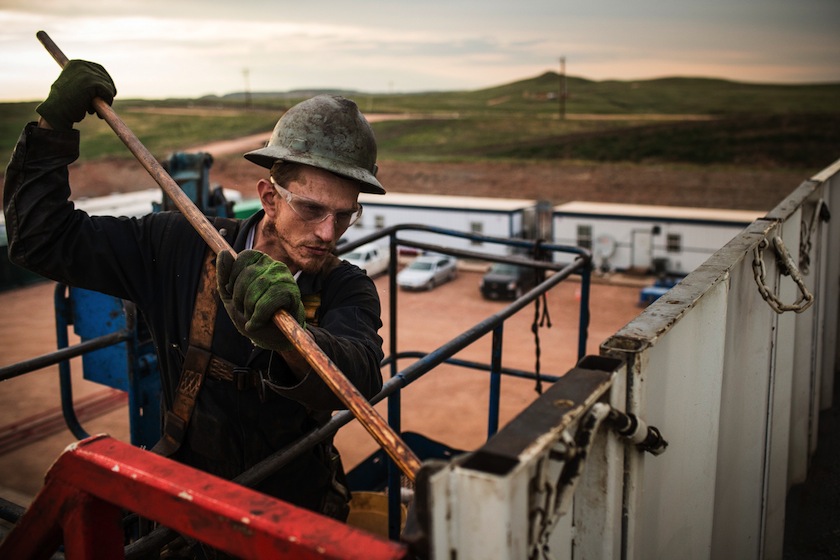 The shale oil revolution is providing a great gusher of profit, jobs, and swaggering entrepreneurship. It epitomizes the optimism surrounding America’s economic recovery.

Indeed, the rise of hydraulic fracking from Montana to Texas to Pennsylvania has lifted U.S. oil production mightily, from 5.6 million barrels a day in 2010, to a current rate of 9.3 million. And until late last year, it was widely accepted that our output would keep rising in 1 million barrel-plus annual leaps for years to come.

The recent drop in oil prices poses a major challenge to the frackers. But oil producers, Wall Street analysts, and most industry experts claim the setback will be brief and minor.

The basic economics of fracking—what it costs to drill versus what oil now sells for—spells big trouble for the shale boom. At best, today’s producers may be able to hold production close to current levels. What’s gravely endangered is the advertised bonanza that virtually everyone deemed inevitable just a few short months ago.

Shale oil production is totally unlike drilling in any other part of the global market. In conventional wells, whether in the Middle East, the Gulf of Mexico, or the North Sea, the wells operate on extremely long cycles. Typically, the amount of crude oil they produce declines at between 2% and 5% per year. Hence, a well that generates 2,000 barrels a day in the first year will yield between 95% and 98% of that quantity in year two. Since the output falls so gradually, wells typically keep pumping for 20 years or longer.

The wells’ long lives help account for the extreme volatility in oil prices. Naturally, producers plan their projects expecting to recoup the upfront investment required to find the oil and install the well––their “fixed costs”––and the “variable” or “marginal” costs of extracting the oil year after year, notably labor and electricity. In a business where the risks stand as tall as the rigs, companies only invest when they forecast future prices far above the total outlay of fixed and variable costs, in hopes of pocketing big profits. The rub is that energy prices frequently fall far below what’s required to return their full costs, let alone make a decent return. That was the scenario from the mid-1980s until early 2002, when oil prices averaged $20 a barrel.

When prices drop, however, almost all conventional wells keep pumping. That’s because the variable cost of lifting the crude is still far lower than the prices it fetches on the world market. Ten-year old wells often have variable costs of just $20 to $30 a barrel, so their owners keep on producing at prices of $60 or $80, even though it would require $100 oil to generate a good return on their total investment. In other words, what they spent to drill the well becomes irrelevant. All that matters is the cash they can generate over and above what’s required to suck out the crude every day. “What drives the business is the marginal cost, not the total cost,” says Ronald Ripple, a finance and energy business professor at the University of Tulsa. “Even at low prices, the production is still contributing something to cover the upfront investment.”

As a result, the global supply of oil is what economists call “inelastic.” Even if prices crater, the oil majors and sheiks keep pumping more or less the same quantities. They’ll only stop when prices drop below the variable cost—and for most wells, they seldom sink that far.

So, the primary determinant of oil prices, especially right now, is demand. Since supply won’t typically drop with a fall in the world’s thirst for oil, a decline in demand generates big, exaggerated downdrafts in prices. Naturally, wars and upheavals in oil producing countries can cause temporary shortages that mask falling consumption, but when production inevitably returns to normal levels, weak demand takes charge and prices crater.

Learn more about the recent decline in oil prices from Fortune’s video team:

That’s what is going on today. Oil consumption in the U.S. has fallen by over 8% since 2010, and the shrinkage in Europe is far greater than that. Meanwhile, China and India have not proven nearly as voracious as forecast. The drop in oil prices from over $100 in May to $48 has not, and will not, cause a major or even minor drop in production. That’s true even in high-cost areas such as the tar sands of Canada. In those forbidding fields, major energy companies have invested billions on plans to produce for 50 years, and even though they’re losing money on their total investment, they’re more than recouping their variable costs. So, as prices wobble, drilling will proceed smoothly.

Except for fracking. Unlike conventional projects, shale wells enjoy an extremely short life. In the Bakken region straddling Montana and North Dakota, a well that starts out pumping 1,000 barrels a day will decline to just 280 barrels by the start of year two, a shrinkage of 72%. By the beginning of year three, more than half the reserves of that well will be depleted, and annual production will fall to a trickle. To generate constant or increasing revenue, producers need to constantly drill new wells, since their existing wells span a mere half-life by industry standards.

In fact, fracking is a lot more like mining than conventional oil production. Mining companies need to dig new holes, year after year, to extract reserves of copper or iron ore. In fracking, there is intense pressure to keep replacing the production you lost last year.

On average, the “all-in,” breakeven cost for U.S. hydraulic shale is $65 per barrel, according to a study by Rystad Energy and Morgan Stanley Commodity Research. So, with the current price at $48, the industry is under siege. To be sure, the frackers will continue to operate older wells so long as they generate revenues in excess of their variable costs. But the older wells—unlike those in the Middle East or the North Sea—produce only tiny quantities. To keep the boom going, the shale gang must keep doing what they’ve been doing to thrive; they need to drill many, many new wells.

Right now, all signs are pointing to retreat. The count of rotary rigs in use—a proxy for new drilling—has fallen from 1,930 to 1,881 since October, after soaring during most of 2014. Continental Resources, a major force in shale, has announced that it will lower its drilling budget by 40% in 2015. Because of the constant need to drill, frackers are always raising more and more money by selling equity, securing bank loans, and selling junk bonds. Many are already heavily indebted. It’s unclear if banks and investors will keep the capital flowing at these prices.

Still, the future of fracking is extremely hard to predict. Continental, for example, pledges to raise production in 2015 despite the fall in its drilling budget. It would be a mistake to underestimate the ingenuity of the entrepreneurs who led the shale revolution. They will exploit new technologies that combine vertical and horizontal drilling to lower their costs. In the boom times, equipment rental, trucking, and labor were all priced at huge premiums; at $100 a barrel oil, producers put sinking the next well far ahead of fretting over their fat payrolls. Now, those costs are falling.

So it’s difficult to know where all-in costs will settle. If oil stays at around $50, a group of super-efficient producers may still be able to make money. Bruce Everett, who teaches petroleum economics at the Fletcher School at Tufts University, is optimistic. “There will undoubtedly be some tailing off in U.S. drilling activity,” he says, “but I expect continued development drilling in major new areas, particularly the Bakken, even at $50.”

If demand rebounds—and it may—prices may very well rise above $60 once again, and fracking will once again become extremely profitable. But it’s not clear if the famous foe of fracking, Saudi Arabia, will let that happen. The Saudis have invested heavily to gain extra capacity of 2 million barrels a day. The Saudis may use that cushion to hold prices around $50, just out of range—at least today—for most shale oil producers.

Then again, the shale industry’s ability to hike production quickly could put a cap of $50 or $60 on oil prices. If prices rise much higher, either the Saudis will intervene, or more shale supplies will flood the market, stabilizing the price. “Because shale wells have short lives, allowing production to come on and off more quickly, fracking could moderate price fluctuations so they’re less volatile than in the past,” says David Kreutzer, an economist at the Heritage Foundation.

But the numbers are still daunting. It’s easy to get financing when your costs are $65 and you’re selling at $100. But when the price is $50, where will the producers find the funds to keep sinking those new wells? It will take a lot of new drilling just to keep production where it is now. A steady but no-growth shale industry is not what America has been counting on. The spread of rigs and jobs that seemed such a certainty, and such a staple of our recovery, may be a fading vision.