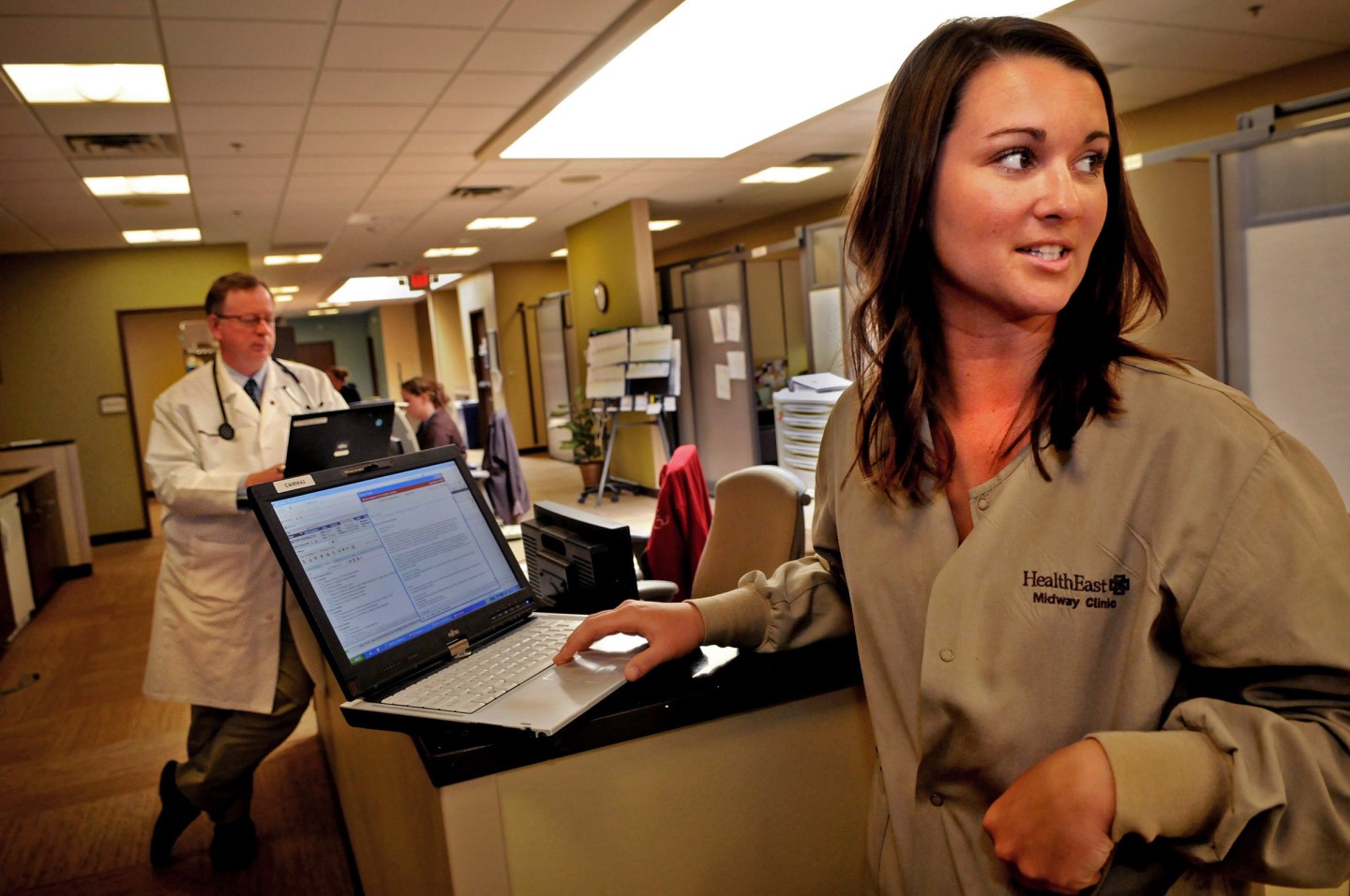 Allyson Untiedt, right, a medical scribe, talks with a colleague before she and Dr. William Brombach, left, enter a patient's room at HealthEast Midway Clinic in St. Paul, Minn. on Wednesday May 28, 2014. Scribes accompany physicians in exam rooms and help document what happens during a patient's visit. They tend to a patient's chart before the exam -- so doctors can quickly find the lab and test results they need -- and help physicians complete documentation chores afterward. (AP Photo/The St. Paul Pioneer Press, Jean Pieri) MINNEAPOLIS STAR TRIBUNE OUT
Photograph by Jean Pieri — AP

Three years out of residency, Kevin Hopkins, the medical director of a family health and ambulatory surgery center in Strongsville, Ohio, was buried in emails, phone calls, and patient notes. And as a self-described “poor typist,” he was repeatedly foiled by his office’s electronic health record system. All that made it near impossible to focus on his main task: examining the 18 to 25 patients that visited him every day.

Hopkins, who wrote about his experience in the Family Practice Management journal, isn’t the only doctor feeling crunched. The federal government’s push for the digitization of medical records and the health insurance industry’s ballooning billing requirements has turned doctors into secretaries and has wedged a computer screen and keyboard into the doctor-patient relationship.

But this digital problem is getting an analog solution. Doctors are simply hiring another worker—often called a medical scribe or medical assistant—to do the documentation for them. Scribes sit in on exams and put a patient’s insurance information, medical history, vital signs, prescription needs, and follow-up visits into the office’s computer system. The doctor, meanwhile, can work with the patient without interruption.

Medical scribes are a viable remedy to doctors’ tech headaches—ironic for a job title reminiscent of feather pens and parchment paper—and they are in great demand.

The American College of Medical Scribe Specialists predicts that the number of scribes will increase from the 20,000 today to 100,000 by 2020. (The Bureau of Labor Statistics doesn’t track medical scribes specifically. It projects the population of what it calls “medical transcriptionists” to grow from 84,000 in 2012 to 90,500 in 2022.) The ACMSS is working to develop national standards for what’s now an unlicensed profession, says Kristin Hagen, the group’s executive director.

So, who are these scribes? Sam Jones, chief operating and financial officer for scribe staffing agency eScribe, says that his company typically hires individuals who work 20 hours a week on average and use the job as a bridge between an undergrad degree and professional school. “We primarily hire folks who are pre-med, pre-nursing school, pre-[physician’s assistant] school, who are just finishing up their undergrad or have graduated and are taking a gap year or fulfilling prerequisites,” he says. eScribe’s employees complete between 80 and 100 hours of online, classroom, and live, scenario-based training. “It’s a non-clinical role that’s largely clerical and there’s currently no certification requirement, but it’s a very demanding job with longs hours.” He pegs industry wages at between $8 and $20 per hour.

The demand for scribe services has created a cottage industry of 22 companies that staff hospitals and doctors offices with such workers, according to the Journal of the American Medical Association. In August, one of them, Medical Scribe Systems, was named one of Inc.’s fasted growing private companies. In October, TeamHealth, a public clinical outsourcing company, paid an undisclosed sum for PhysAssist Scribes, Inc., which provides scribe services to 155 emergency departments in 22 states. Jones told Fortune that eScribe has doubled its headcount to 200 in the last 12 to 14 months. Michael Murphy, chief executive officer of Scribe America, which touts itself as the nation’s largest scribe staffing agency, says his company has seen a compounded revenue growth rate of 90% over the past three years and $76 million in revenue in 2014. “From 2004 to 2009, we were in 32 hospitals. From 2009 to 2014, we grew from 32 to 610,” Murphy says.

Scribes have been emergency room staples for a few decades, Murphy says, since it’s a work environment focused on speed, productivity, and throughput. But scribes have slowly seeped into the outpatient office thanks to federal incentives to digitize medical records. The American Recovery and Reinvestment Act authorized the Centers for Medicare and Medicaid Services to award incentive payments worth tens of thousands of dollars to doctors who switch to electronic medical records. The Recovery Act program is now at the stage where it dings physicians’ reimbursement rates if they haven’t gone digital. And the Affordable Care Act’s emphasis on health outcomes and the value of medical services—as opposed to operating on a fee-for-service model—encourages doctors to collect and track patient data.

Those catalysts have prompted more doctors to go digital; the only problem is that health professionals think that electronic health record software is clunky, cumbersome, and not intuitive.

“[Health care] has to be the only industry in the history of American business that has seen productivity decline as it’s added automation,” says Jeff Goldsmith, a health industry analyst. A study published in the American Journal of Managed Care found that electronic health record use at medical practices with four or more clinicians saw a productivity boost—because bigger practices can use electronic records to communicate more effectively, the authors hypothesized. Meanwhile, electronic record use at small practices led to productivity declines.

Enter the scribe. Hopkins reduced his workload by delegating data input to a medical assistant. The result? A 40% increase in productivity; he was able to see more patients per day.

At the same time, some worry that medical scribes are such a good solution to physicians’ immediate technological and time management quandaries that they’ll reduce market pressure to improve the usability of electronic health record software and delay advances in health care efficiency. “The big question is whether electronic health records could have been designed so [physicians] don’t need to use scribes,” says Robert Berenson, a senior fellow at the Urban Institute.

Jones of eScribe begs to differ. “Are we using scribes as a crutch in the evolution of electronic medical records? Let’s assume that we’re working with the most sophisticated technology. It’s not going to read the physician’s mind,” he says. “At some point [patient information] has to be properly documented and that will always be a demand on physician’s time.”