The world’s biggest winners and losers from cheap oil, in one chart 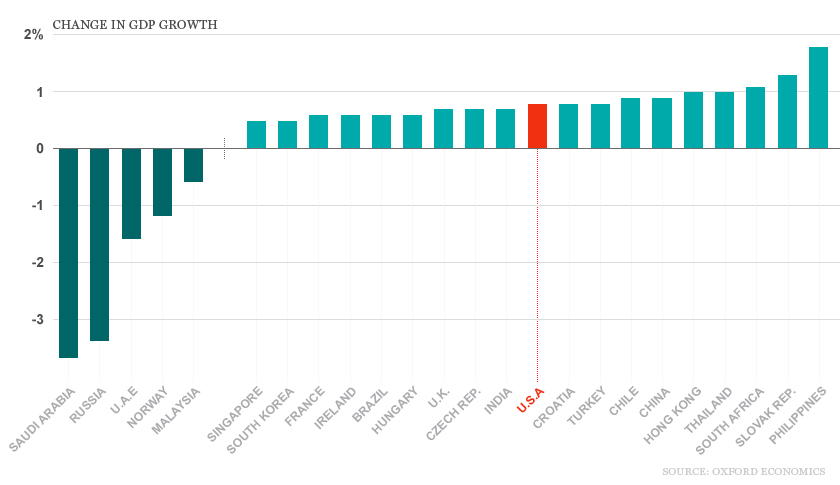 The Philippines is going to crush it. And Norway, unfortunately, is in for some hard times.

That’s just two of the findings from research firm Oxford Economics, which recently set out to determine what cheap oil would mean for the world’s economy. And they think they figured it out.

Oxford’s report is titled “Oil-ipedia!” and says at the top, “This note does what it says on the tin—it provides much of what you need to about the impact of oil price declines.” And the authors write that if you don’t see what you want, they will be happy to send you their 17-page, 11-variable spreadsheet. (I’ve got it. It’s comprehensive.)

The chart at the top of this article is from data in the report and it looks at what countries will lose and gain the most from cheap oil. For most countries around the world, cheap oil is a good thing. Most countries benefit. And many of the countries getting a boost could use it these days: France, Brazil, and China. Meanwhile, the pain in Russia, Saudi Arabia, and, yes, Norway, is pretty severe. Still, even combined, the net losers do not make up a large part of the world’s economy.

Some caveats: This chart is based on what will happen in 2015 if oil is at $40 a barrel. So prices would have to drop a bit more from their current levels and stay there for a while. Also, it’s hard to determine why the Philippines does so much better than everyone else. I asked one of the economists who worked on Oxford’s research, and he couldn’t explain. Yes, the Philippines doesn’t produce oil, or a lot of it, and it’s an island nation that has to import what it wants. But Japan, another island nation, gets a very little boost from low oil prices in Oxford’s model.

One explanation is that Oxford includes the effect that oil prices could have on monetary policy. Lower oil prices would cause inflation to drop and potentially allow the Philippines to lower its 4% interest rate. Japan’s interest rates are already as low as they can go, so no boost from lower inflation there. What’s more, developing nation’s are less efficient, so the Philippines has a greater demand for oil relative to its population.

So, take the data with a grain of salt. But the general thesis appears to be accurate: A world with lower oil generally looks pretty good.

Then why have markets reacted so negatively to the drop in oil? The losses from lower oil prices are concentrated in the oil and gas sector and generally among larger companies. And it’s pretty clear that Exxon (XOM) and some others are going to take a hit. Meanwhile, the gains from low oil prices are spread out to consumers everywhere. Which companies will benefit is harder to determine. And Oxford’s model doesn’t factor in potential financial crises. So, if Russia’s concentrated problems boil over, as they did in 1998, to other financial markets, then you could see wider problems.

Oxford’s research also suggests that the markets appear to be overreacting negatively. In fact, lower oil prices could add nearly 1 percentage point to U.S. GDP, potentially increasing growth by a quarter. That’s a good thing. Right now, the market seems to be ignoring that.