A great year for hiring (finally), so where were the job gains? 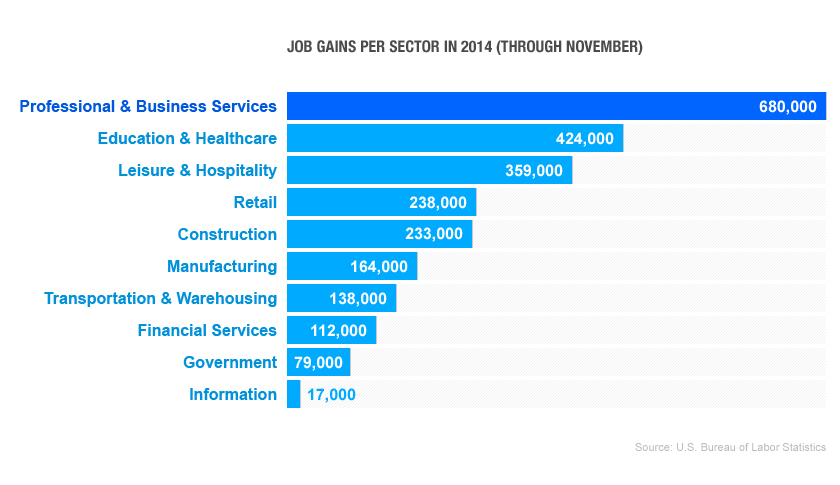 A good year for hiring — finally.

Not only has overall job growth been strong this year, but the types of jobs added have been spread across almost every industry.

In November, the Labor Department’s diffusion index, which measures the breadth of industries expanding their payrolls, reached its highest level since January 1998, signaling that the labor market recovery is broadening, and isn’t restricted to certain sectors of the economy.

The strongest showing came from the business and professional services sector, which added a total of 680,000 jobs through November this year (December numbers won’t be released until Jan. 9.) This sector includes a range of positions, such as marketing associates, secretaries and lawyers.

Take, for example, the online reviews company Yelp (YELP), which hired about 300 salespeople over two quarters this year, adding to its almost 2,000-person staff. CFO Robert Krolik said that the company is preparing for the future now “by hiring so many folks now and making sure that they are productive.” If business does slow down, all Yelp has to do “is slow down the hiring process,” he added.

That sentiment seems to have been shared across industries, from healthcare to construction and manufacturing — sectors that were buoyed by the nation’s strong GDP gains in recent quarters. The economy added jobs at a strong clip this year — an average of 241,000 a month — and has finally made up for all the jobs lost during the Great Recession. From January to November, a total of 2.65 million jobs were added and the unemployment rate fell to 5.8% from 6.7% when we rang in the start of 2014.

The pickup in job growth also helped boost wages, although gains have been more muted than many experts were hoping. Wages were up 2.1% year-over-year in November, slightly ahead of overall inflation.

Much of the jump in pay is due to increased hiring in industries with higher wages, such as manufacturing, business and professional services, and healthcare. Meanwhile, lower-paying industries like retail, leisure, and hospitality, and temporary help services have seen a slowdown in their rates of job growth in 2014 compared to previous post-recession years.

The steadily improving labor market is good news for U.S. workers, but it may also mean that the Federal Reserve is more likely to start raising interest rates sooner rather than later. The U.S. central bank said it would be “patient” in deciding when to adjust its current policy, though many experts see rates rising in mid- to late-2015. Either way, the focus will be on making sure the U.S. economy can sustain the kinds of job gains we’ve seen so far this year.