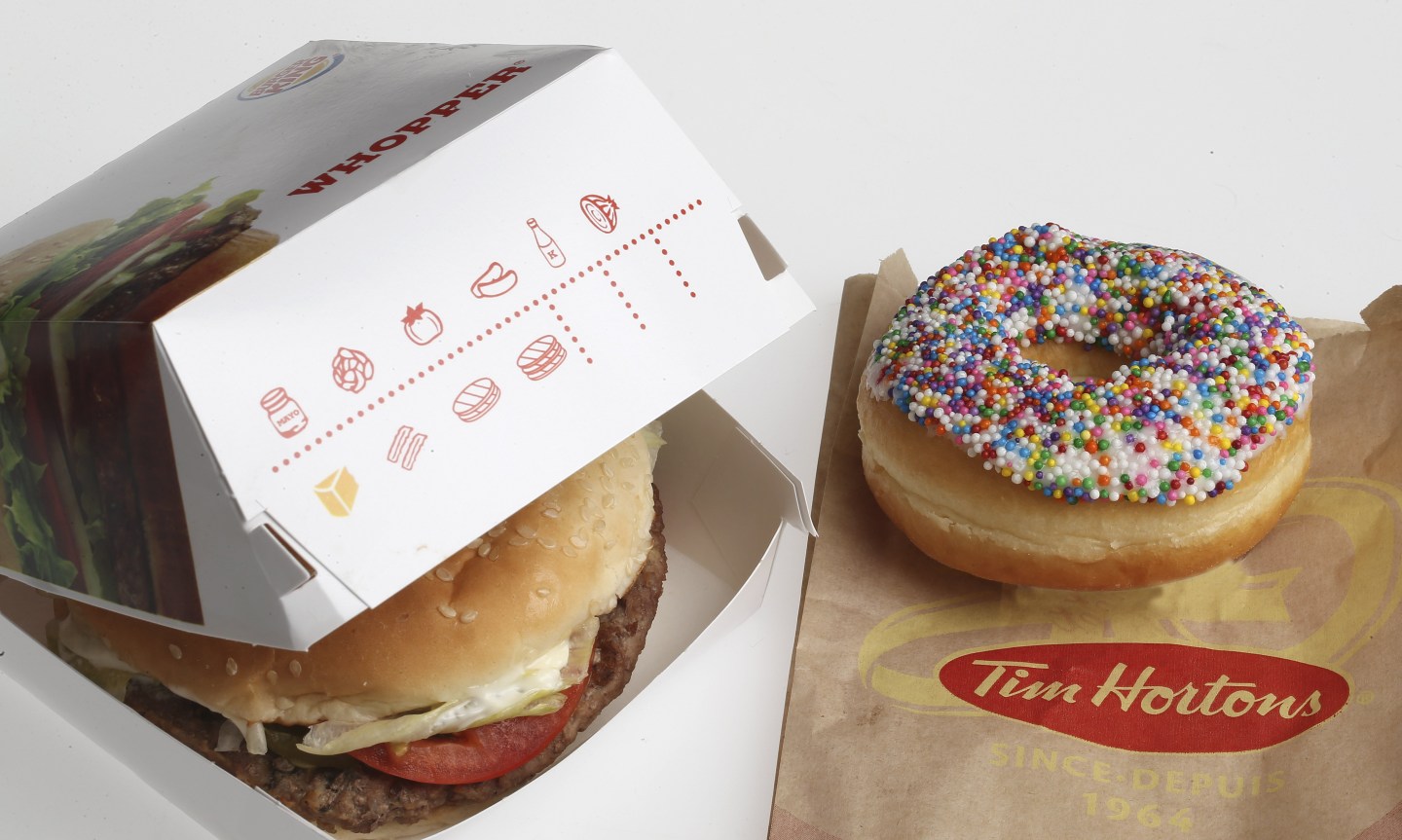 TORONTO, ON - JULY 27: Tim Horton's and Burger King are set to merge. Photos of several outlets as well as their products for file stories. August 27, 2014 (Richard Lautens/Toronto Star via Getty Images)
Photograph by Getty Images

It was a year of big deals. Alibaba (BABA) raised $25 billion, making it the biggest IPO in history. Comcast (CMCSA) agreed to pay $45 billion to buy Time Warner Cable (TWC), only to be outdone a few months later when AT&T (T) said it would acquire DirecTV (DTC) for $48.5 billion. Globally, M&A easily topped $3 trillion for the year. With that many deals, it’s hard to avoid a few foolish ones. Here are our picks for the worst deals of 2014.

Burger King executives denied that lower taxes was the motivation for the deal. They said Burger King already paid a lower than average tax rate, meaning it was pretty good at avoiding Uncle Sam right where it was. So there.

Warren Buffett, who is helping to finance the deal, also said the deal was not about taxes. But come on. What is the deal about then? The synergies between selling doughnuts and burgers, especially between two chains that have very strong brand names, seems farfetched. And quickly after the deal was announced, Burger King executives confirmed there would be no doughnut burgers. So the acquisition may not be about taxes; it could just be plain dumb.

2014 featured several hot IPOs. MOL Global (MOLG) was not one of them. The company said it was the largest processor of online payments in Southeast Asia, and that its prospects were bright. Investors disagreed.

In the the worst debut for an IPO in over a decade,MOL's shares dropped 35%. In November, one month later, the company's chief financial officer, who had only joined MOL in August, quit.

The company has yet to release its financial statements. In all, the stock has dropped 80% since its IPO. Shareholders have since sued the company, arguing that it overstated its sales, profits, and its business prospects.

The past year saw its share of unbelievable valuations of young tech companies with little revenue and little or no profits. But Facebook's deal for WhatsApp was perhaps the biggest head scratcher.

In February, Facebook (FB) announced that it would purchase the messaging service in a deal that, by the time it was closed, was worth nearly $22 billion.

$22 billion! For a company that generated just $10 million in revenues in 2013. Worse, WhatsApp had nearly $150 million in expenses that year, meaning it spent $15 for every dollar it brought in. Not a great business model.

Defenders of the deal said that WhatsApp had 450 million users. That means it was able to generate a whole $0.02 in sales for every user it signed up a year. That's totally worth $22 billion.

An employee holds the box of a Motorola Solutions Inc. Moto X smartphone at the Flextronics International Ltd. factory in Fort Worth, Texas, U.S., on Tuesday, Sept. 10, 2013.

Google still can't admit that its 2011 acquisition of Motorola's cell phone business was a bust, but do the math. Google (GOOG) paid $12.5 billion for the once-dominant cell phone brand. Three years later, in January 2014, Google sold the division, minus some patents, to Lenovo for $2.9 billion. So that's a lot less.

Google defenders say that was the plan all along, to get Motorola patents for Google's Android business, and sell off the rest. But that's revisionist history. Google spent three years and billions trying to turn around Motorola, and it failed. Its own phone was never a hit. And the patents appear to be a lot less valuable than Google thought. The Lenovo deal will stop the bleeding, but it won't change the fact that Google did a dumb deal.

Darden executives sold Red Lobster to get its critics off their backs. Instead, the deal got the restaurant company's CEO and entire board fired. Activist investor Jeff Smith said that if you subtract the value of Red Lobster's real estate, it's clear that Darden (DRI) basically gave the chain away. Others said the deal was an insult to shareholders. "Who knew lobsters had middle fingers," wrote one analyst.

It later emerged that Darden's executives had painted a rosy picture of Red Lobster's prospects for bondholders while it talked down the value of the chain to defend the deal. In early October, Smith won a proxy battle with the company. He quickly delivered Darden's management his order to go.

The largest leveraged buyout ever turned into one of the largest bankruptcies ever. In April, Energy Future Holdings (EFH), formerly TXU, filed for Chapter 11. In 2007, Goldman Sachs, KKR, and TPG banded together to buy out the giant Texas utility. The deal added to the company's enormous amount of debt, which reached $40 billion at the time of its bankruptcy.

It wasn't only the debt that did the deal in. It also turned out to be a lousy bet on natural gas prices, which, due to new extraction technologies like fracking, plummeted.

Warren Buffett, who lost $900 million on the deal, wrote to his investors last year, "Most of you have never heard of Energy Future Holdings. Consider yourselves lucky; I certainly wish I hadn’t.”