17 auto predictions for 2015, fearless and feckless 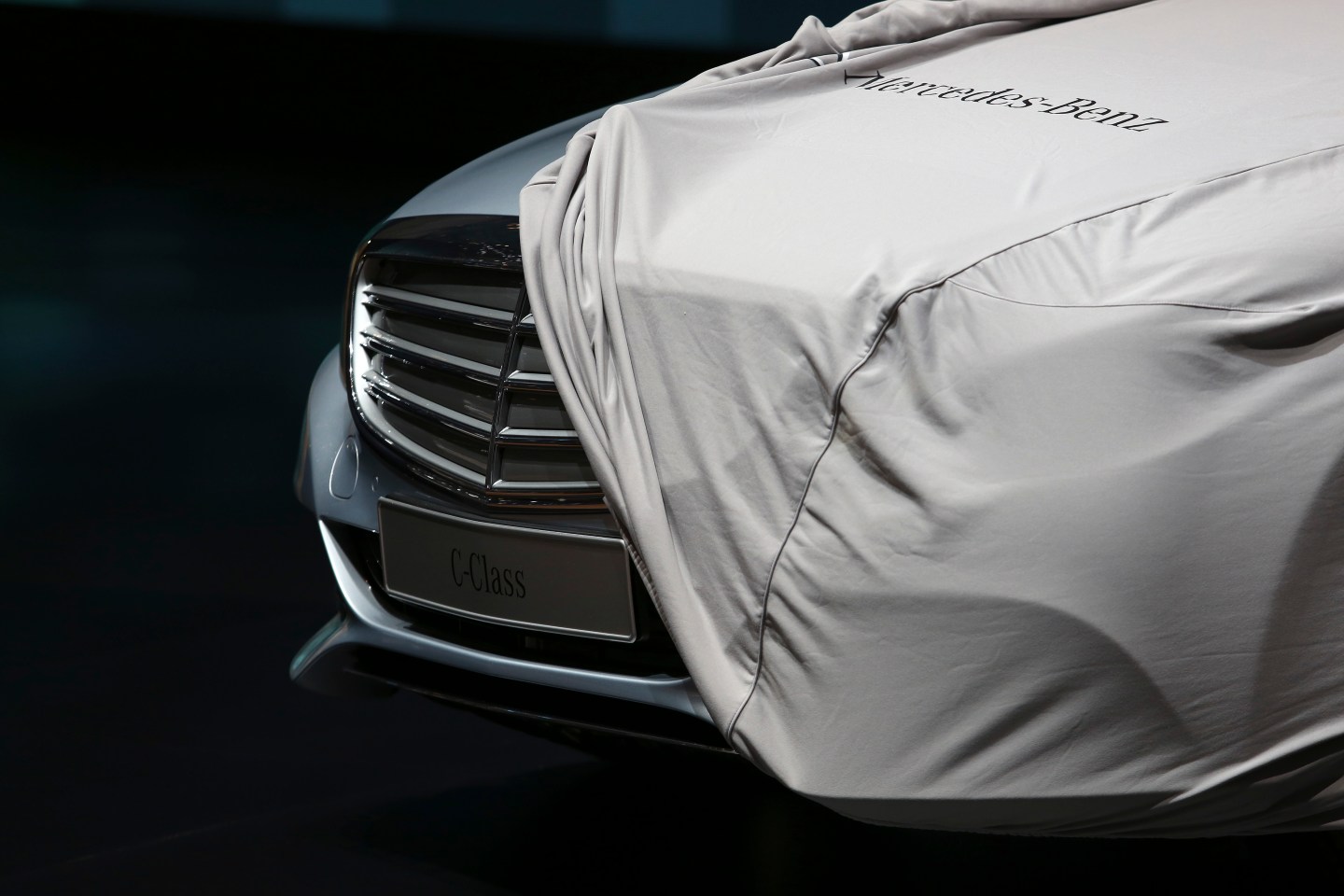 A protective cover sits on the hood of a silver Mercedes-Benz C-Class 220 BlueTEC automobile, produced by Daimler AG, on the company's stand ahead of the opening day of the 84th Geneva International Motor Show in Geneva, Switzerland, on Monday, March 3, 2014. The International Geneva Motor Show will run from Mar. 4, and showcase the latest models from the world's top automakers. Photographer: Chris Ratcliffe/Bloomberg via Getty Images
Photograph by Chris Ratcliffe — Bloomberg via Getty Images

Despite car and truck sales that motored past 16 million for the first time since 2007, recalls dominated the news for most of the year. General Motors (GM) held center stage, dealing with cascading revelations about faulty ignition switches and recalling millions of vehicles. While GM opted for something approaching full disclosure of its missteps , publishing an report into company-wide fumbles, Japanese airbag maker Tanaka chose to stonewall. It left any remedies up to its beleaguered customers, notably Honda and Toyota. They are the ones who deal with the fallout of exploding safety devices that fatally fired shrapnel throughout the passenger compartment.

On the sales front, General Motors and Ford (F) lost market share to Chrysler, which leveraged its Jeep brand to previously unimagined heights – and then, metaphorically left its heritage behind when it established legal domicile in the Netherlands and changed its name to FCA US LLC.

Among the year’s biggest surprises was the plunge in gasoline pries. Economists differed on the economic impact—money in the pockets of consumers offset by declines in exploration and drilling activity—but everyone agreed that it was bearish for small cars and hybrids. The combination of cheap gas and a steep sticker price made the Cadillac ELR the runaway winner of the most disliked car of the year award. Only 155 of the Volt-based $80,000 cars found buyers in November.

So what does 2015 portend? Here are some educated guesses.

Detroit Three: The other two Michigan-based manufacturers still face bumps. General Motors copes with continued fallout from its ignition switch recall while Ford fights through the most aggressive launch period in the company’s history.

Japanese Three: Honda treads water while it waits for bold new designs from its Americanized management team to reach market, particularly the Acura NSX super car, which has been on the auto show circuit now for several years. Focused now on his legacy, CEO Carlos Ghosn drives executives even harder to meet targets in his latest three-year plan while he grooms a successor. As for Toyota, Automotive News declares that it is firing on “all cylinders” before its move from Southern California with fresh products in key segments.

German Three: Mercedes-Benz begins to sag as new lower-priced Benz’s inevitably erode its once invincible “the best or nothing” status. At BMW, imminent arrival of a new 7-series cements its status as the preferred brand of Scarsdale, Shaker Heights, and Santa Monica. A new A3, starting at $30, 795, should nicely lift Audi’s sales beyond 2014’s 15% climb, and a new Q7 SUV should nicely lift profits.

Chinese manufacturers: Coming to the U.S.? Warren Buffett’s BYD says it is arriving in 2015 and Geely in 2016 but we’ve been hearing that someone was coming since at 2006. The refinement of Chinese cars is the issue. With more than 80 local automakers producing 524 different models in China, R&D money is spread too thinly to produce meaningful results.

Tesla: In an effort to blunt criticism about slow refueling times for battery-powered cars, Tesla (TSLA) starts to roll out of a network of battery-swap stations. CEO Elon Musk must hope he can outdo Shai Agassi’s Better Place, which tried to build a whole company around battery-swaps before going bankrupt in 2013.

Headquarter shifts: With Toyota leaving for Texas and Mercedes headed toward North Carolina or Georgia from New Jersey, look for Subaru to chart its own path when it builds its new headquarters. One option: Moving closer to its customers by relocating in Vermont.

CEOs: Newbies Mary Barra at GM and Mark Fields at Ford start playing close attention to the moves made by FCA’s Sergio Marchionne. Despite running his growing empire on two continents, Marchionne tacked on a U.S market share gain of 1.2 points, unhindered by one of the weakest product lineups in the business and troubles with his much heralded eight-speed transmission.

Awards: Despite early wins for VW’s Golf GTI, the Detroit-centric jurors of the North American Car and Truck award 2015 prizes to Ford’s Mustang as well as Ford’s F-150 pickup truck.

Truck wars: Awards aside, Ford’s aluminum pickup is hard to build and slow to sell, leaving an opening for Ram’s fast-rising 1500 while Nissan tries to forget the failure of its first full-size truck when it launches the second-generation Titan with the biggest of big rig styling. The industry’s biggest secret is revealed by veteran executive John Krafcik in Automotive News: In the over $50,000 category, pickups and SUVs distributed through non-premium dealers outsell German luxury brands.

Brands with the most to make up for in 2015: Volkswagen, whose stale product line depressed sales by 11%, thereby delaying Ferdinand Piech’s plans for global supremacy, and Volvo, down 17%, which has yet to make any progress under its Chinese owner.

Brands with the most incentive to coast in 2015: Jeep, which must be exhausted after lifting sales an astonishing 44% on the back of the new Cherokee, and Subaru, now the 10th most popular brand in America after improving its sales by 21% in its usual fashion: quietly.

Alternative fuels: For the first time since diesel-powered cars from Europe started arriving here in the 1950s, old first-person accounts about the joys of driving a diesel fall off to near zero. They are replaced by new first-person accounts about the joys of driving cars with ridiculously high horsepower like the 580-hp Chevrolet Camaro ZL1 and Dodge’s Challenger SRT Hellfire with 707 hp. Elsewhere: fuel-cell cars with their longer cruising range move center-stage, stealing the limelight from battery-powered cars.

Technology: Cadillac will introduce high-resolution video streaming in the rearview mirror, which improves the field of vision by about four times greater than a traditional mirror by removing obstructions like pillars and passengers. Just the thing for aging Cadillac drivers with stiff necks. Coming next: a “beep, beep, beep” signal like that used by garbage trucks whenever the car is driven in reverse.

Autonomous cars: Researchers are working on devices that will automatically park your car in a parking lot without you being in, or near, the car. It will also slip a note under the wipers of the car next to it with your phone number and insurance carrier in case of any scratches.

Dealers: Car dealers work toward reducing the paperwork involved in buying a car and the hours it takes to fill it out. That will give them more time to devote to upselling add-ons such as extended warranties, paint and fabric protection, and rust-proofing.

Classic cars: Prices plummet as an enormous supply of post-war classics, hidden away on an off-shore island, becomes available for the first time in 50 years. Collectors are especially eager to find Packards, Studebakers, Hudsons, Nashes, Kaisers, and Henry J’s. More’s the surprise because all of the cars are in running condition and are used as daily drivers.