2014: The year Apple came roaring back 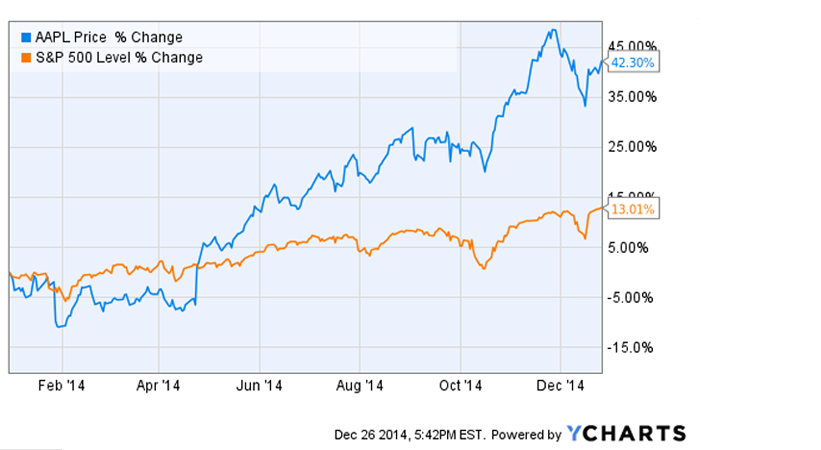 “Fire Tim Cook: Too Little, Too Late, Too Stupid,” sneered a headline on the TheStreet exactly one week after Apple reported mixed Q1 results and got a $41-per-share haircut.

By the end of 2014, Tim Cook was CNN‘s CEO of the year, the Financial Times‘ Person of the Year and a Time Magazine POY runner up. The stock meanwhile, had split 7 for 1, grown 40%, and added nearly $200 billion to Apple’s market value.

What the hell happened? Here’s what I remember:

The low point: In Haunted Empire: Apple after Steve Jobs, Yukari Kane asked whether Apple could “stay great without its iconic leader” and concluded — 385 pages later — that it could not. If Harper Collins had hoped to cash in on the “Apple is doomed” theme that bottom feeders like Business Insider were using for link bait, they were, in late March 2014, too late. Tim Cook called it “nonsense” and so did nearly every review.

The pivot: If Wall Street has an Apple bit, it flipped from 0 to 1 four weeks later, on April 23. That’s when Apple announced that it had clobbered Q2 earnings expectations, was splitting shares 7 for 1, had upped its dividend and launched the biggest share repurchase program in history. “Buy Apple, before Tim [Cook] does it himself,” RBC’s Amit Daryanani told his clients. The stock popped: $44 per share (8.3%) in after-hours trading.

The swagger: Like a heavy meal, Apple’s two-hour WWDC keynote in early June took some time to digest. There were major updates to not one but two operating systems. New health and home monitoring interfaces. Dozens of new ways to tie one Apple product to another. A whole new programming language. A new confidence — almost a swagger — on stage. “The message was loud and resonant from where I sat,” wrote The Verge’s Joshua Topolsky. “‘We’re back, we’re ready to play, and we know who we are.’”

The big reveal: The build-up started in May, when Eddy Cue promised “the best product pipeline that I’ve seen in my 25 years at Apple.” It continued when Apple chose for its venue the same Silicon Valley auditorium where Steve Jobs had unveiled the Mac 30 years earlier. By the time the Sept. 9 event was over, Apple had introduced two sustaining products (the big and bigger iPhone 6 and 6 Plus) and two new product categories (Apple Pay and Apple Watch) with the potential to disrupt whole new industries. One month later Apple refreshed its iPad line and introduced what even Windows loyalists conceded may be the best desktop computer on the market.

Cook’s time: This was the year Tim Cook found his voice. In March he put a narrow-minded shareholder in his place (“If you want me to do things only for ROI reasons, you should get out of this stock”). In June he described Google’s Android as a “toxic hellstew of vulnerabilities.“ In October, he came out. “I’m proud to be gay,” he wrote in a pitch-perfect Businessweek essay.

I don’t consider myself an activist, but I realize how much I’ve benefited from the sacrifice of others. So if hearing that the CEO of Apple is gay can help someone struggling to come to terms with who he or she is, or bring comfort to anyone who feels alone, or inspire people to insist on their equality, then it’s worth the trade-off with my own privacy.”

I’m looking forward to 2015. Apple closed the books on its first fiscal quarter on Saturday. We’ll get the results in three or four weeks. This should be fun.