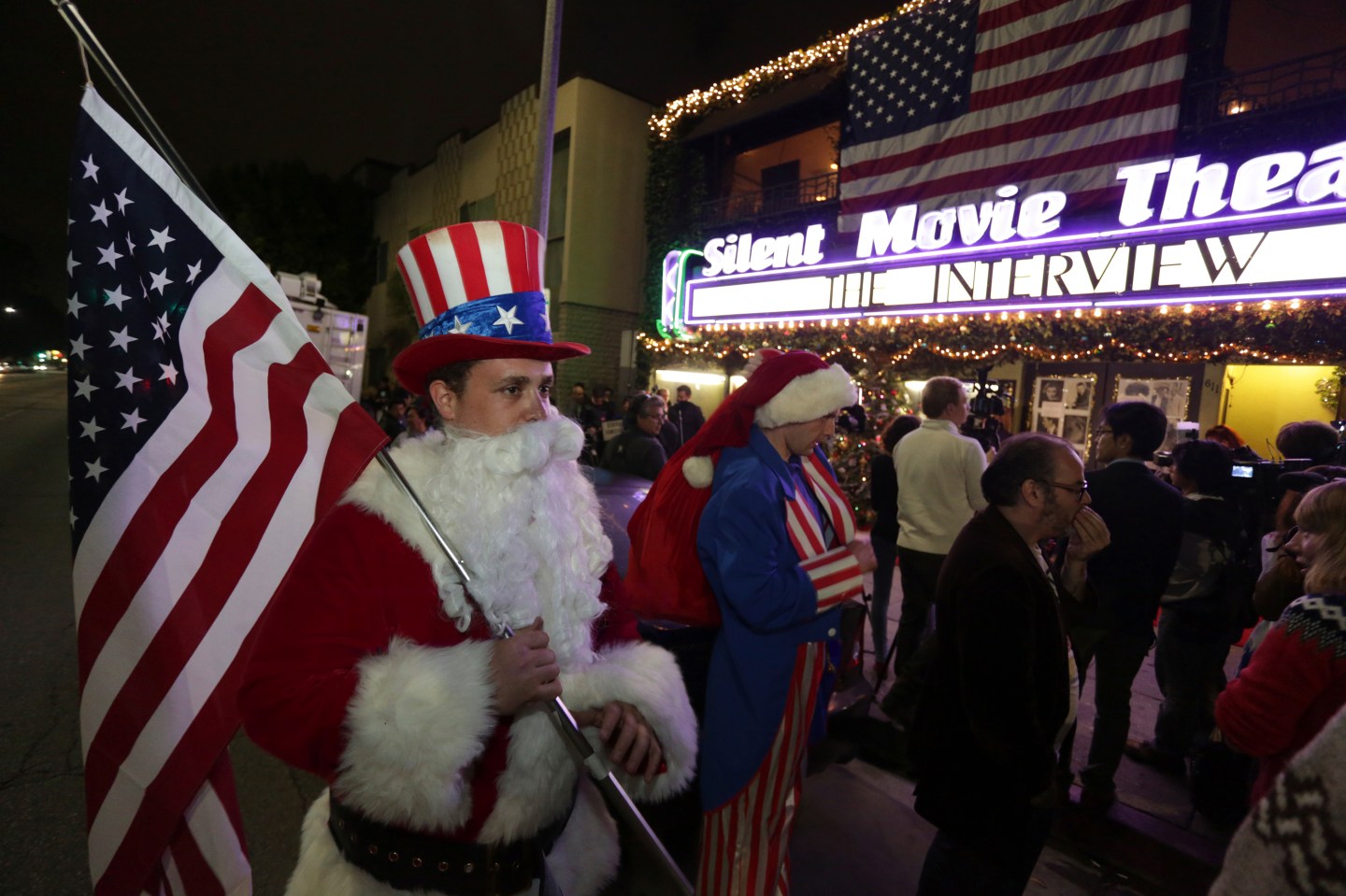 Matt Ornstein, dressed in a Santa Claus costume, holds an American flag as fans line up at the Silent Movie Theatre for a midnight screening of "The Interview" in Los Angeles, California December 24, 2014. "The Interview," the provocative comedy that triggered a devastating cyber attack on Sony Pictures, went straight to U.S. consumers on Wednesday in an unprecedented online debut on Wednesday. REUTERS/Jonathan Alcorn (UNITED STATES - Tags: POLITICS ENTERTAINMENT) - RTR4J892
Photograph by Jonathan Alcorn — Reuters

(REUTERS) – “The Interview,” the Sony Pictures film about a fictional plot to assassinate North Korean leader Kim Jong Un, opened in more than 300 movie theaters across the United States on Christmas Day, drawing many sell-out audiences and statements by patrons that they were championing freedom of expression.

Co-directors Evan Goldberg and Seth Rogen, who also co-stars in the low-brow comedy with James Franco, surprised moviegoers by appearing at the sold-out 12:30 a.m. screening of the movie at a theater in Los Angeles, where they briefly thanked fans for their support.

Sony Pictures this week backtracked from its original decision to cancel the release of the $44 million film after major U.S. theater chains pulled out because of threats of violence by Guardians of Peace, a computer hacking group that claimed responsibility for a destructive cyberattack on Sony last month.

The United States blamed the attacks on North Korea.

Movie theater managers and patrons alike said they believed there was nothing to fear, and the initial screenings on Thursday were uneventful.

But one of the online outlets that distributed the film ahead of its theatrical release, Microsoft Corp’s Xbox Live, reported that users were experiencing problems getting connected on Thursday.

A hacking group called the Lizard Squad claimed it was behind disruptions at both Xbox and Sony Corp’s PlayStation Networks, which was not carrying “The Interview.” The group’s claim could not be verified.

Neither Microsoft nor Sony offered explanations for the connectivity problems, though both services expected heavy use as consumers who received the devices for Christmas tried to log on all at once.

Extra network traffic on Xbox from users downloading “The Interview” may also have exacerbated connectivity problems for Microsoft.

The film also was available to U.S. online viewers through Google Inc’s Google Play and YouTube Movie, as well as on a Sony website, www.seetheinterview.com. It can be seen in Canada on the Sony site and Google Canada’s website.

A Sony spokeswoman on Thursday said she had no figures on the number of downloads so far, and the studio was not expected to have box office numbers from theaters before Friday morning.

The audience at the first screening of the film in New York City, at the Cinema Village in Manhattan’s Greenwich Village, remained silent during a scene showing the death of Kim Jong Un in the downing of his helicopter.

Matt Rosenzweig, 60, of Manhattan, said the moments that drew the most applause had to do with the idea of acting against censorship rather than animosity toward North Korea.

Although Cinema Village manager Lee Peterson said the New York Police Department planned to post officers outside the theater, there was no visible police presence outside or inside the venue for the first screening.

An afternoon screening at the Van Nuys Regency Theaters in the city’s San Fernando Valley was two-thirds full and drew a diverse crowd ranging from teens to senior citizens, who laughed loudly throughout at Rogen and Franco’s antics.

“It was much better than I thought it would be,” said Carlos Royal, 45, a professor who came with a friend dressed in Santa hats and took selfies for the occasion in front of the theater’s Hollywood sign marquis. “I wanted to support the U.S.”

The movie, which is playing in theaters in major metropolitan areas as well as in smaller cities ranging from Bangor,Maine, to Jasper, Indiana, features Rogen and Franco as journalists who are recruited by the CIA to assassinate the North Korean leader.

Sony decided to release the film after U.S. President Barack Obama, as well as such Hollywood luminaries asGeorge Clooney and Republicans and Democrats in Washington, raised concerns that Hollywood was setting a precedent of self-censorship.

The audience in Manhattan exited the theater to a throng of network TV cameras and a crowd of people lined up for the next showing.

“It was more serious, the satire, than I was expecting,” said Simone Reynolds, who saw the film while visiting fromLondon. “There’s a message for America in there too about America’s foreign policy.”

North Korea has called the film an “act of war.”

Most fans simply called “The Interview” a funny movie.

Ken Jacowitz, a 54-year-old librarian from the New York borough of Queens, called it “a funny film made by funny people.” He had a message for North Korea and the hackers: “You have given this movie whole new lives.”