Spain to China by rail: A 21st Century Silk Road riddled with obstacles 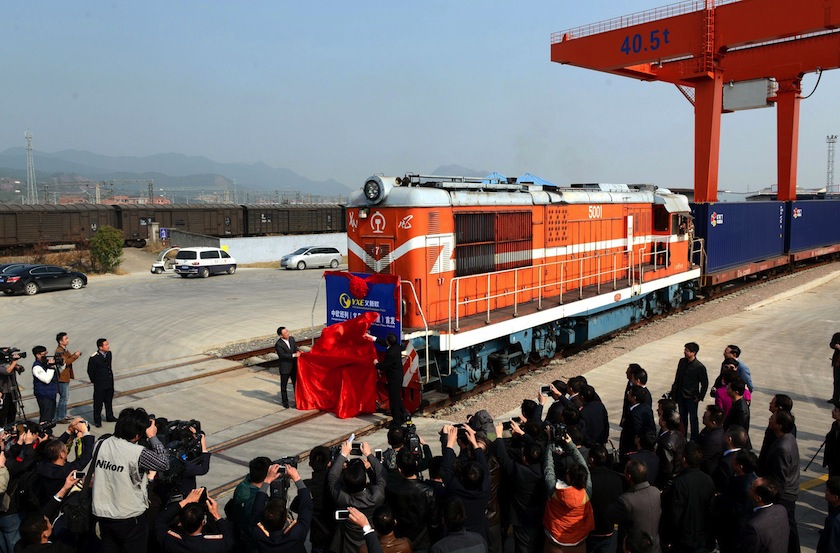 Journalists wait to take photos of the first cargo train "Yixinou" from China's Yiwu to Spainish capital Madrid in a train station in Yiwu, east China's Zhejiang province on November 18, 2014. Growth in foreign investment into China slowed in October, the government said on November 18, 2014, amid a slowdown in the world's second-largest economy and concerns over business risks. CHINA OUT AFP PHOTO (Photo credit should read STR/AFP/Getty Images)
Photograph by AFP/Getty Images

When the cargo train from the Chinese manufacturing hub of Yiwu arrived in Madrid on December 9, it was welcomed with a celebration of superlatives.

This “21st-century Silk Road” was the “longest rail link in the world,” longer than the Trans-Siberian railway and the Orient Express combined. And after spending 21 days covering more than 8,000 miles through China, Kazakhstan, Russia, Belarus, Poland, Germany, France and Spain, it did set a distance record.

The question is, does a commercial cargo service from China to Spain – especially one whose maiden voyage to Madrid included a container filled with kids’ spinning tops – make economic sense?

While it may seem like a fanciful adventure, extreme long distance rail service is an important piece of the international shipping arsenal. Use of the so-called Eurasian Land Bridge between China and Europe is well established at least as far as Germany, which receives some five trains a week.

The recently arrived 30-container train of cutlery, toys, and other consumer goods will return to China after Christmas loaded with wine, ham, and olive oil. In the first half of 2014, international container traffic on the Trans-Siberian rail line rose 8%, to 865,600 teu (20-foot equivalent units).

Long distance rail cargo splits the difference between airplane and boat delivery in terms of price and speed. According to Miklós Kopp, director of freight at the International Union of Railways, sending a 10-ton 40-foot container from Chengdu, China, to Lodz, Poland, takes 12 to 14 days by train, compared to several days by plane (if you include customs and delivery on each end) and some six weeks or longer by boat. The price tag comes to some $40,000 by air, compared to $10,000 by train, and as low as $5,000 by boat, Kopp says.

“If you go from the center of China to the center of Europe, it’s [rail travel] a good decision, though not as cheap as by sea,” says Kopp.

Still, carrying rail freight across the Eurasian Land Bridge comes with many problems, says Jean-Paul Rodrigue, a professor of global studies and geography at Hofstra University and lead author of the textbook The Geography of Transport Systems.

For one, freight trains in Europe carry less than half the cargo of such trains in the U.S. because low bridges, tunnels, and other infrastructure problems prohibit the use of double-stack containers. Another problem, Rodrigue says, is that the trip from Germany to Spain adds another week to the journey, cutting out some of rail’s speed and cost advantages.

“Spain is the worst place in Europe to do a train trip. It’s as far as you can get in continental Europe from Asia,” he says. “I think it’s a bit for show, to demonstrate the technology and capability to put on these services. But I have some doubts that these services are commercially feasible.”

Added to these problems, notes Joan Jané, a lecturer in production, technology and operations at Barcelona’s IESE Business School, is that the average winter high temperature in Kazakhstan is 20 degrees Fahrenheit. Such cold temperatures require special containers for sensitive electronic goods, not to mention Spain’s big exports.

“The train can spend six to eight days in places with very low temperatures,” he says. “And you can’t have frozen wine or ham.”

The three operators of the Spain train – InterRail, DB Schenker Rail, and Transfesa – are still deciding whether to add twice monthly China-to-Spain service in spring 2015. If they do, the service will likely have to take a different form to be profitable.

Higher travel costs mean that this kind of train service will be best for high-value goods like electronics and medicines, not cheap toys, says Libor Lochman, executive director of the Community of European Railway and Infrastructure Companies (CER) trade association.

The service could also offer more competitive prices if it were regular and direct to Spain (instead of dropping off and picking up goods along the way), says Jané of IESE. And, he adds, operators could further lower costs by finding high-value goods to sell back to China, making sure containers do not return empty. That will be difficult, as Spain ran a €13 billion trade deficit with China in 2013. (Right now, many containers are sent back from Europe empty; others are filled with cars, car parts, and manufacturing equipment.)

Despite the hurdles, China-Europe rail trade will most likely grow in the coming years. The CER’s Lochman notes that, in the future, a new tunnel opened from the Asian to the European sides of Istanbul could be used for a new Eurasian Land Bridge. And, he says, while it will continue to be impossible to double stack containers, European rail freight authorities are trying to make rail more competitive by upgrading infrastructure to allow for longer, 1,000- to 1,500-meter trains, compared to the 600-meter trains used today.

Still, while traversing a gaggle of countries on the 21st-Century Silk Road may seem romantic (and perhaps even profitable), the method comes with geopolitical problems that planes and boats don’t have to contend with, says Rodrigue of Hoftra.

“You have a lot of border issues,” he says. “You have to think entering Russia with the embargo, that’s going to be a lot of fun.”