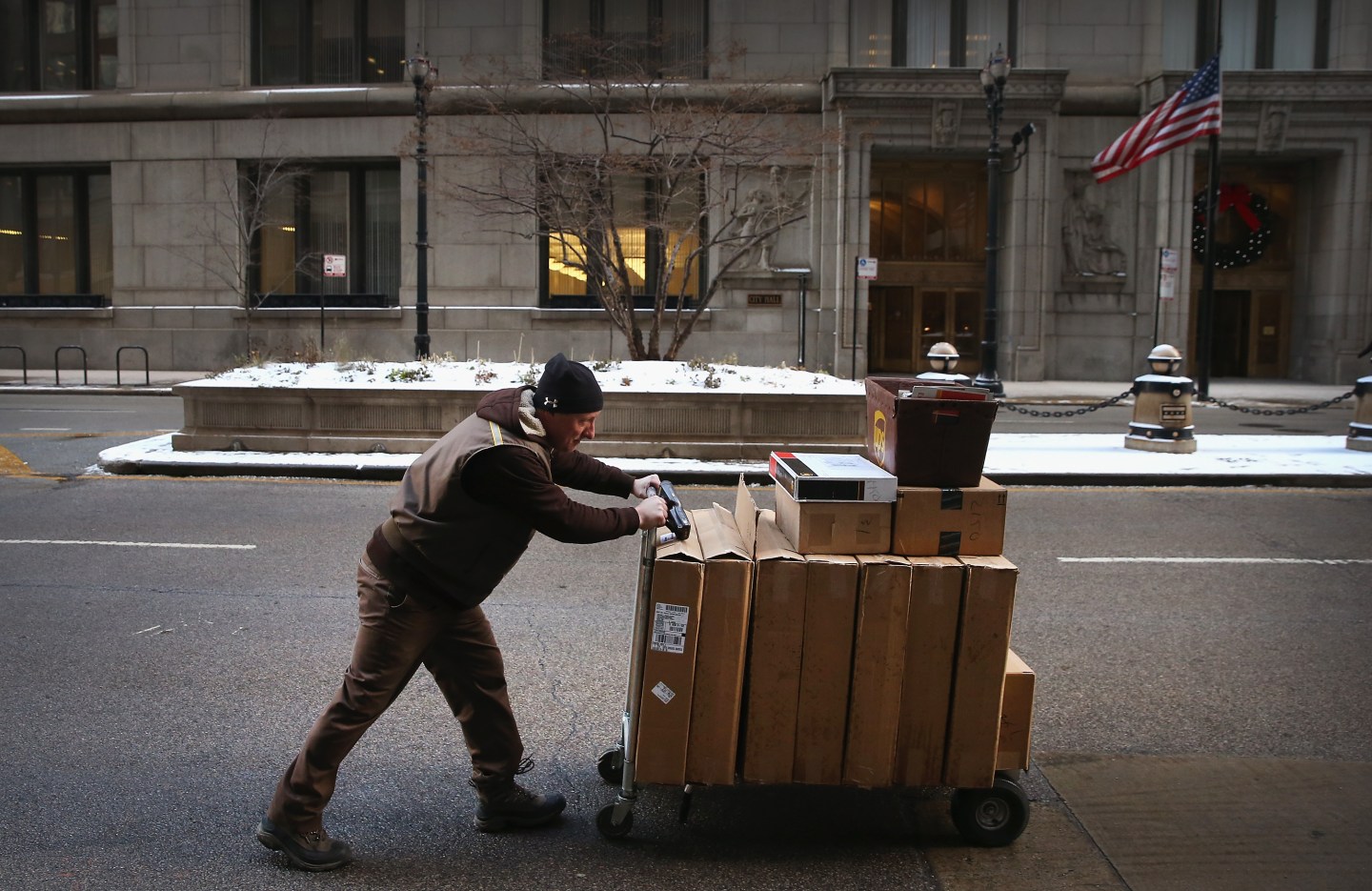 With the Christmas holiday in just three days, it makes sense that shipping news is a major focal point to kick off Monday morning. For the United Parcel Service (UPS), today is the biggest day in the shipping giant’s history. Meanwhile, Bloomberg drove into the Google-Amazon.com rivalry in the market for same-day package deliveries, a key focus for many retailers looking to edge out their competitors and consumers wait longer and longer before placing an order for their loved ones.

In news outside the world of retail, U.S. President Barack Obama discussed the Sony hack with CNN, calling the massive attack of Sony Pictures cyber-vandalism, not an act of war. The expression “cyber-vandalism” drew some complaints from Republicans.

UPS, which has reportedly spent about $500 million preparing for the holidays, is poised to deliver 34 million packages on Monday – more than any other day in its history according to The Wall Street Journal. The shipping company is hoping to recover from a major flub last year, when it was overwhelmed by an unpredictably large number of packages right before Christmas and it couldn’t deliver thousands of them in time for the big day. To better position itself, the company has hired nearly twice as many seasonal workers for this holiday than it did in 2013, while also adding more vehicles to its fleet, installing temporary delivery centers and other initiatives, which Fortune reported on earlier this year.

Obama, in an interview with CNN’s “State of the Union” show that aired on Sunday, called a massive hacking of Sony Pictures not an act of war but an “act of cyber vandalism that was very costly, very expensive.” Obama said one option he was considering was returning North Korea to the U.S. list of state sponsors of terrorism, from which Pyongyang was removed six years ago, according to CNN. Republicans are saying Obama’s statements aren’t enough, with some calling on the president to re-impose sanctions on North Korea and add the country to the terrorism list. North Korea, meanwhile, is accusing Obama of spreading rumors and warning of strikes against the White House, rhetoric that is routine from the isolated Asian nation, which turns up the propaganda when tensions run high with foreign powers.

Google (GOOG) is reportedly gaining ground in the market for same-day package deliveries, angling to take on e-commerce giant Amazon.com (AMZN). As more consumers take to the Web for their holiday shopping needs, they are going straight to Amazon and bypassing Google, presenting a direct threat to the search behemoth as it loses out on money made by displaying ads alongside search results. To counter that problem, Google is betting on a service called Google Express, which for now is available in big U.S. cities. And Bloomberg believes that Google Express is now looking like a permanent offering.
[fortune-brightcove videoid=3951025703001]

The average price of a gallon of gasoline in the U.S. has slipped 25 cents in the past two weeks, according to a Reuters report that cites data from the Lundberg survey. The price has now tumbled to its lowest keel in more than five-and-a-half years, Reuters said. Prices have been pressured by global oversupply that is driven in part by a jump in production from the U.S. shale boom. Oil’s decline has led some to ponder if cheap fuel is actually good for the U.S., a question Fortune pondered earlier this year.
[fortune-brightcove videoid=3953204453001]

William Erbey, the executive chairman of Ocwen Financial (OCN), is expected to resign as part of a legal settlement with New York’s financial regulator, according to a Wall Street Journal report that cited people familiar with the matter. Erbey, who built Ocwen into the largest nonbank company handling mortgage payments and administering foreclosures, will step down next month as part of a proposed consent order with the New York Department of Financial Services, WSJ said. At issue: allegations that Ocwen didn’t properly deal with distressed homeowners and may have saddled them with excessive charges. Ocwen is expected to pay $150 million toward New York housing programs and aid to foreclosed homeowners, the people familiar with the matter said.