Netflix’s kerfuffle in Canada: More on the way? 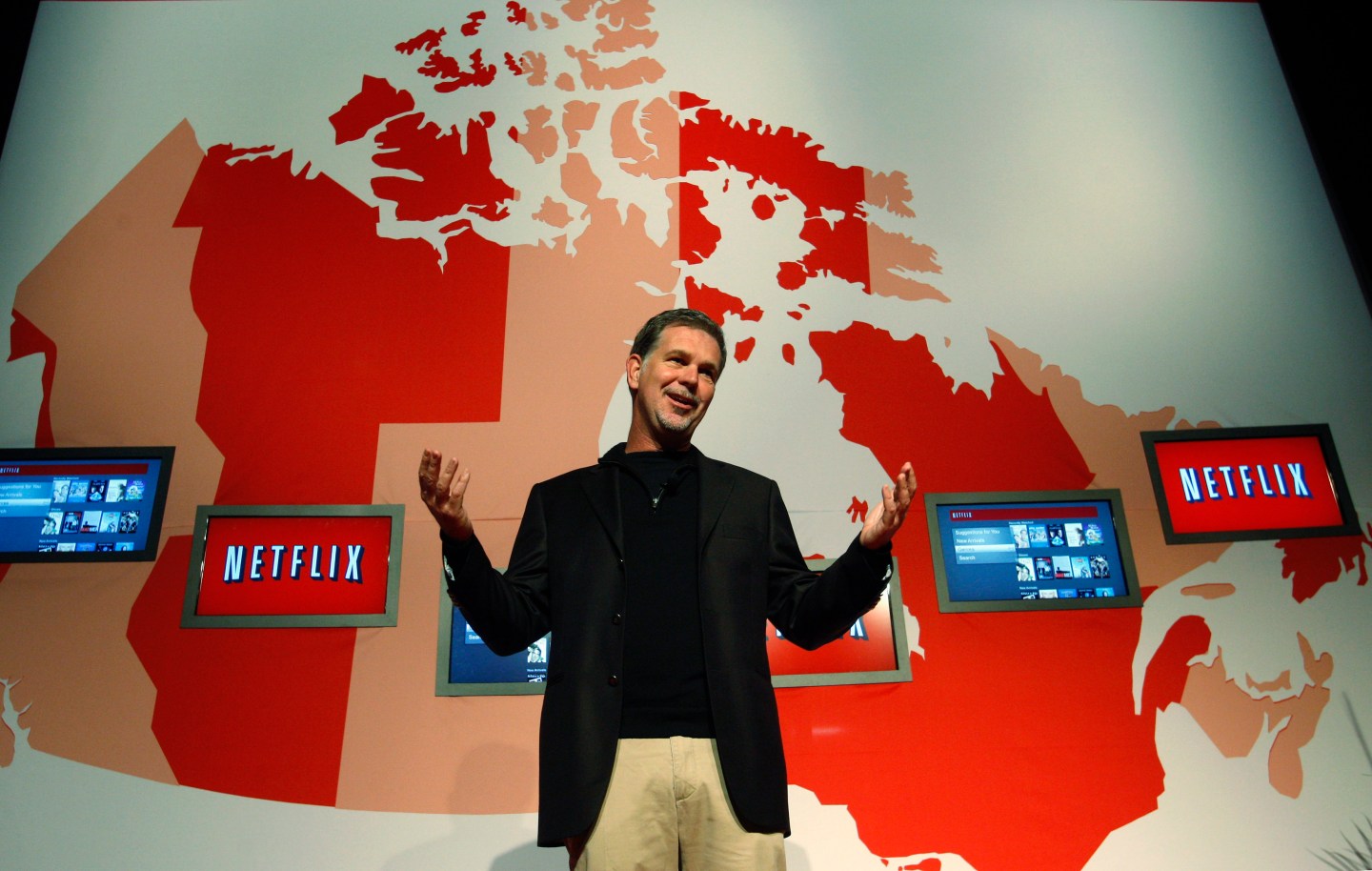 Netflix Chief Executive Officer Reed Hastings speaks during the launch of streaming internet subscription service for movies and TV shows to TVs and computers in Canada at a news conference in Toronto September 22, 2010. The Canadian introduction marks the first availability of the Netflix service outside of the United States. REUTERS/ Mike Cassese (CANADA - Tags: MEDIA BUSINESS) - RTXSJ6O
Photograph by Mike Cassese — Reuters

Is Netflix too successful for its own good?

So it would seem judging by the actions of Canada’s broadcast regulator, which in September threatened to revoke the Internet video company’s new media exemption and begin regulating Netflix like all other broadcasters in the country.

Such a move would require Los Gatos, Calif-based Netflix (NFLX), which has operations in more than a dozen countries including Europe and Latin America, to make financial commitments to creating original Canadian content.

“The issue raises major questions about how the CRTC will be able to incorporate Internet companies such as Netflix and Google into their policy process,” says Michael Geist, Canada research chair in Internet and e-commerce law at the University of Ottawa.

The CRTC put many of these concerns to rest last month when it announced that Netflix would not have to pay fees to subsidize Canadian TV production or comply with quotas for Canadian content. (“Regulating Netflix is the least of our worries,” said the CRTC’s chairman, Pierre Blais, to La Presse.) The battle may have been short-lived, but the standoff could serve as an example for similar skirmishes in other foreign jurisdictions where Netflix does business. In France, for example, Netflix agreed to pay a 2 percent video-on-demand tax and give French content preferred status when it launched there this fall.

“Regulators will look to each other to see what others have achieved,” says Iain Grant, managing director at Montreal-based tech and telecoms consultancy SeaBoard Group.

In Canada, things came to a head at a public hearing when the CRTC demanded that Netflix hand over what it believes is sensitive business intelligence, including the number of Canadian subscribers and spending on local programming. Netflix refused, noting that it needed guarantees that the data would be kept private. The retort left CRTC chair Jean-Pierre Blais visibly agitated by the Internet company’s defiance. Analysts estimate Netflix will generate revenue of about $300 million in Canada this year from a subscriber base of four million.

In the end the CRTC blinked first, but issued a stern written warning in which it pointed out it has the powers of a superior court to compel Netflix to provide confidential business information. This may or may not in fact be true when it comes an over-the-top (OTT) video streaming service that has neither a physical presence or employees in Canada. “There are serious doubts the CRTC has the legal authority to regulate Netflix under the current law,” Geist says.

The standoff also leaves industry watchers wondering whether a much larger regulatory and political battle is about to break out in Canada—one that will be watched around the world—between the telecoms regulator and leading OTT companies, including Google’s YouTube, Hulu, and WhereverTV.

Certainly content producers in Canada—such as the actors’ union Actra, the Canadian Media Production Association, and the Directors Guild of Canada—have lobbied hard to have Netflix regulated, thereby forcing the company to employ their services.

“The CRTC is mandated to concern itself about fostering Canadian content and is rightly concerned that its present tools are antiquated and inappropriate for the Internet Age,” Grant says. “But it is process-bound. It will take time to re-think how to implement its mandate.”

Since launching in Canada in 2010, Netflix has licensed a number of Canadian TV series, including Trailer Park Boys and Republic of Doyle. Most recently it teamed up with City, a television network owned by rival Rogers Communications, to produce six episodes of a survivalist thriller series called Between. Under the partnership—regarded as a peace offering to the CRTC—City will air the series first in Canada and Rogers will later offer it on its copycat video-on-demand service Shomi. Netflix will have rights outside Canada; one year after the series premieres, Netflix will be allowed to stream it on its Canadian service.

Netflix continues to expand its service with rollouts in Australia and New Zealand planned for the first quarter of 2015. It’s a safe bet to say that broadcast regulators in those countries have watched the Canadian situation carefully.