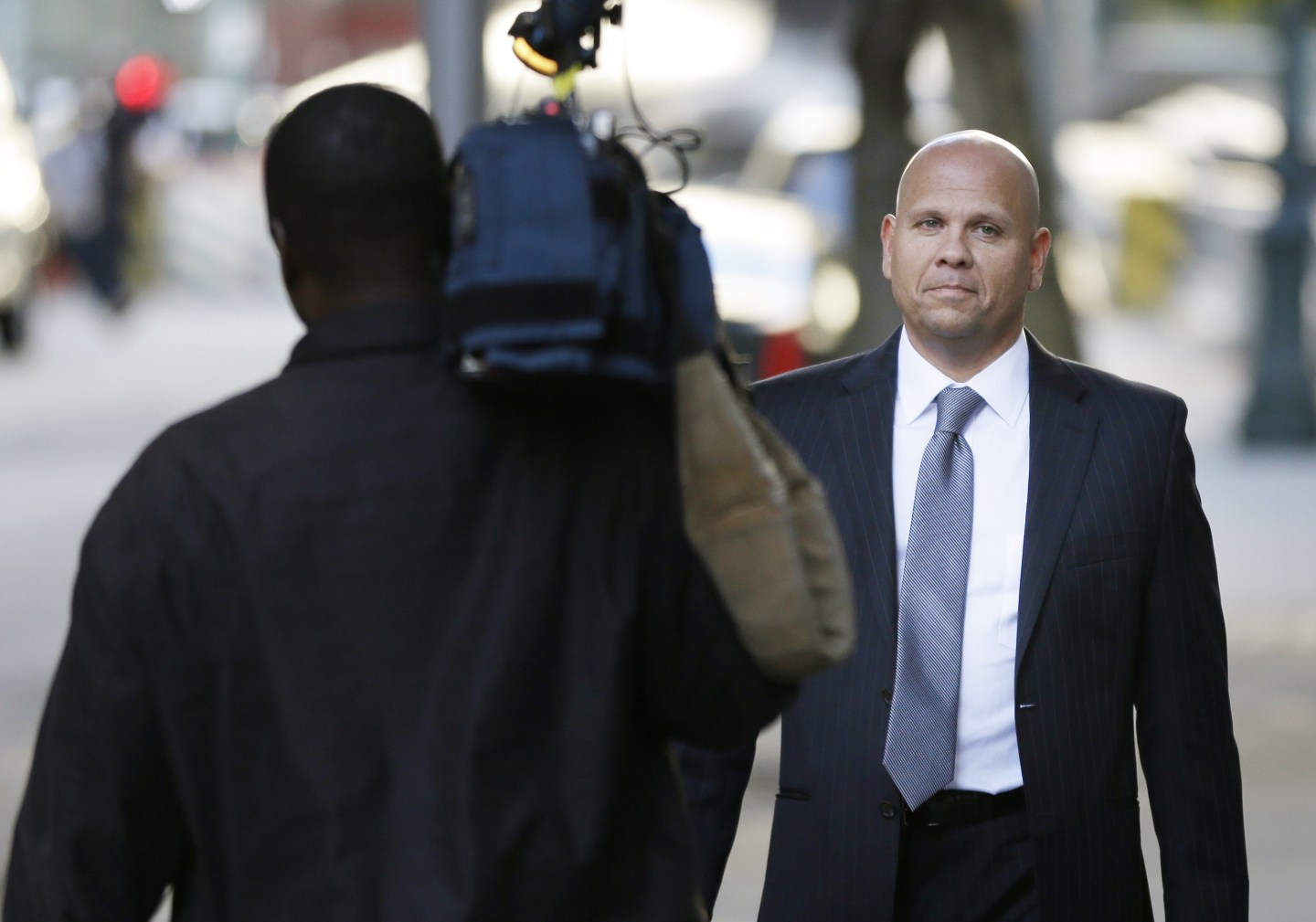 George Perez arrives to federal court in New York, Tuesday, Oct. 8, 2013. The longtime secretary of imprisoned financier Bernard Madoff and four other back-office subordinates of the Ponzi king are going to trial Tuesday as the government for the first time shows a jury what it has collected in its five-year probe of one of history's biggest frauds. Prosecutors say fictitious trades and phantom accounts were created with help from Madoff's secretary, Annette Bongiorno, a supervisor in his private investment business; Daniel Bonventre, his director of operations for investments; JoAnn Crupi, an account manager; and computer programmers Jerome O'Hara and Perez. All have pleaded not guilty. (AP Photo/Seth Wenig)
Photograph by Seth Wenig — AP/file

(REUTERS) – A former computer programmer for Bernard Madoff was sentenced to 2-1/2 years in prison on Wednesday for helping the imprisoned fraudster carry out his multibillion dollar Ponzi scheme.

The sentencing of George Perez, who worked at Madoff’s firm from 1991 until its collapse in 2008, came nine months after a Manhattan federal jury found him guilty and a day before the sixth anniversary of Madoff’s arrest.

“He must be punished in a way that’s severe and commensurate with his crimes,” she said.

Perez, 48, was the fourth of five former employees to be sentenced following their convictions in March on all counts, including securities fraud and conspiracy in the first criminal trial over Madoff’s Ponzi scheme.

Perez told Swain he was “sad and tired,” adding: “I’m terribly sorry for the role my work played.”

Madoff is serving a 150-year prison term after pleading guilty in 2009 to running a scheme that cost investors more than an estimated $17 billion in principal.

Courtesy of the United States Department of Justice

The defendants have said Madoff deceived them into believing his investment advisory business was legitimate. They are expected to appeal their convictions.

All the defendants received less prison time than requested by prosecutors, who in Perez’s case had asked for more than eight years.

Matthew Schwartz, an assistant U.S. attorney, ahead of Perez being sentenced, urged Swain to avoid issuing further light sentences for the Madoff defendants to avoid setting a precedent in future fraud cases.

“Judges will have to explain how small-time crooks in front of them were worse than the defendants in this case,” he said.

Swain nevertheless gave Perez a less-harsh sentence than prosecutors wanted, saying he was less culpable than other defendants.

Fifteen people have been convicted in connection with Madoff’s fraud. A final defendant, former Portfolio ManagerJoann Crupi, is scheduled to be sentenced next Monday.