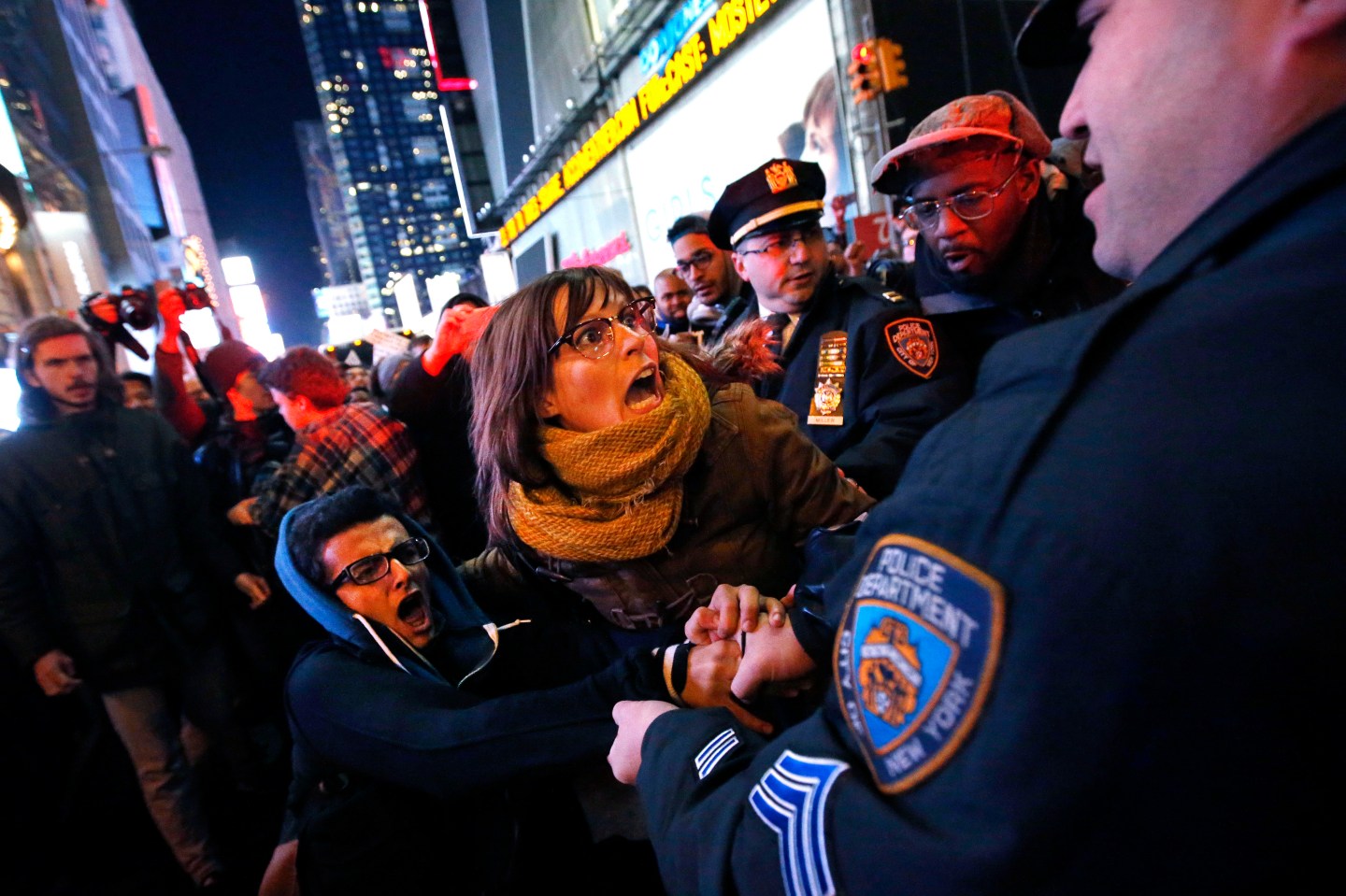 Police make arrests after protesters rallying against a grand jury's decision not to indict the police officer involved in the death of Eric Garner attempted to block traffic at the intersection of 42nd Street and Seventh Avenue near Times Square, Thursday, Dec. 4, 2014, in New York. (AP Photo/Jason DeCrow)
Photograph by Jason DeCrow — AP

Thousands of protesters gathered in major U.S. cities for a second night Thursday to rally against the police-involved deaths this year of unarmed black men, just hours after New York’s mayor announced a citywide police retraining program and one day after the news that a white officer would not be indicted in the death of Eric Garner.

A large and rowdy crowd gathered at Foley Square in Lower Manhattan, as similar protests popped up in Washington, D.C., Chicago and elsewhere, echoing demonstrations the night earlier. Garner died in July after officer Daniel Pantaleo put him in a chokehold, an aggressive move that is banned by the New York Police Department.

Wednesday’s grand jury announcement, which came just over a week after a similar outcome in the Ferguson, Mo., case involving teenager Michael Brown, sparked an immediate outcry and led a number of activists and elected officials to demand a federal investigation.

Attorney General Eric Holder announced Wednesday that the Justice Department had opened a civil rights inquiry into the incident, which was caught on video and later went viral.

As footage of the rallies filled news segments Thursday evening, with many protesters chanting Garner’s final words “I can’t breathe,” his mother Gwen Carr opened up about her reaction to the grand jury’s decision not to indict Pantaleo.

“I couldn’t believe that they came back and didn’t come back with probable cause to bring this case to trial. I couldn’t even answer a phone call,” she told CNN. “I just wonder… what video was they watching? Because obviously it wasn’t the one the whole world was watching.”

Carr said she does not accept Pantaleo’s apology. “He was choking him and my son was begging for his life. That was the time for the apology. He should have got up off of him and let him breathe… I would have still had my son,” she added. “He has no regard for human life if this is the way he treats suspects.”

She hopes that Pantaleo will still face charges in federal court.