How Coca-Cola built a sugary empire, by outsourcing as much as possible 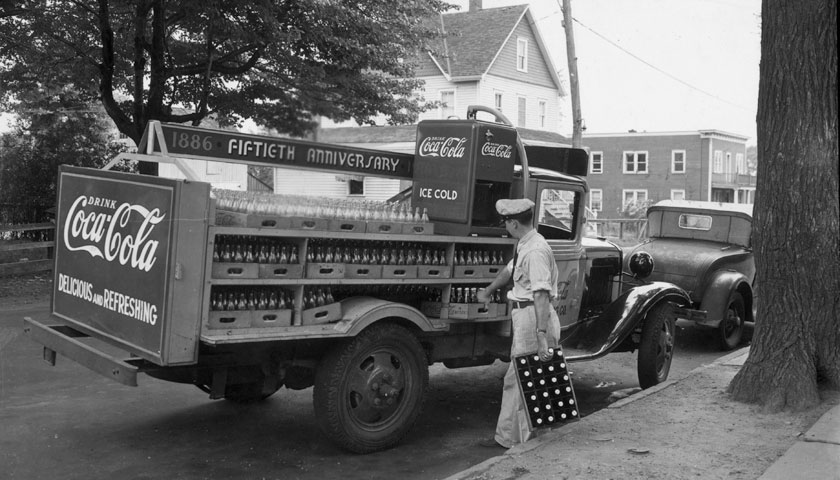 A delivery man unloading cases of Coca-Cola from a truck, circa 1936
Photograph by Hulton Archive/Getty Images

From the very beginning, Coca-Cola had a drug problem.

The brand’s founder, Atlanta pharmacist John Stith Pemberton, was addicted to morphine, a narcotic many suspected Pemberton began using after suffering a series of debilitating wounds while defending the city of Columbus, Georgia, during the Civil War. By the 1880s, Pemberton was not well, and he was also hurting financially. In 1872, Pemberton filed for bankruptcy and a few years later watched helplessly when two fires ravaged his Atlanta business. In 1886, he had finally clawed his way out of debt but was still strapped for cash.

That was the year Pemberton introduced Atlanta to Coca-Cola. Pemberton patterned his drink after a French patent medicine called Vin Mariani, a Bordeaux wine mixed with coca leaves, which had become quite popular in international markets by the end of the 1870s, and why not? Here was a drink that was essentially cocaine-laced wine, inducing quite a buzz for the habitual consumer. All sorts of luminaries testified to its restorative properties, including U.S. President Ulysses S. Grant and Pope Leo XIII.

Cash-poor Pemberton believed it made smart business sense to create a knockoff of this popular beverage, which is exactly what he did, selling his own French Wine of Coca in 1885. The problem was, Protestant clamoring for prohibition led to citywide restrictions on alcohol consumption in Atlanta, forcing Pemberton to replace the wine with carbonated water. Thus, Coca-Cola became a kind of temperance drink in 1886.

The decision to switch to water was more than just an expedient solution to a prohibition problem: it allowed Pemberton to outsource roughly 80% of his product’s volume onto others. That’s because it was soda fountain operators who mixed the water—at least five ounces per one ounce of syrup—into Pemberton’s finished beverages. All Pemberton sold was a dark, syrupy concentrate, which allowed him to save enormous amounts of money on transportation costs. Of course, the soda fountain water ultimately came from the municipal tap.

This model continued under Pemberton’s successor, Atlanta pharmacist Asa Candler, who signed the first bottling franchise contracts for Coca-Cola in 1899. Initially hesitant to approve this distribution method—considering the rudimentary nature of most bottling operations at the time—Candler came to see that bottling enabled Coke to reach rural markets far removed from city centers. What made the deal even sweeter was the fact that independent businessmen in small towns covered the tab for this expansion. Bottlers fronted the capital to buy the machinery, packaging, and municipal water, as well as the trucks and tires that spread Coke’s syrup through the nation’s commercial arteries.

But Coke’s outsourcing strategy didn’t stop there. On the supply side, Coke also shunned ownership of factories and plants. The company did not own sugar plantations in the Caribbean, high-fructose corn syrup wet mills in the Midwest, or decaffeination facilities in the Southeast. Rather, the company relied on a host of independent businesses—the Monsanto Chemical Company, Cargill, Hershey Chocolate Company, among many others—to mine, process, and refine the critical ingredients that went into its finished beverages. In short, Coke was averse to vertical business integration, and instead acted as a kind of commodity broker, making money by transferring materials from independently owned producers and distributors.

I call this money-making approach Coca-Cola capitalism. Coke followed this path throughout the 20th century. It involved getting others, whether it was government-owned water works or vertically integrated sugar refineries, to invest in the production and distribution systems needed to turn the “Real Thing” into a real thing. What made Coke great, in other words, was not really what it did, but what it didn’t do. It proved incredibly adept at getting independent businesses and local governments to bear the majority of the costs of producing and distributing its products.

Take municipal recycling systems. Here was a publicly financed program that helped soft drink companies expand their productive capacity on the taxpayer’s dime. Once again, Coke did little of the work, letting municipalities and private citizens invest in elaborate reclamation infrastructure in the 1980s and 1990s that conveniently brought copious quantities of packaging materials back to local centers near its corporate distributors. Rather than having to pay for the waste they produced, Coca-Cola received a kind of public subsidy that in the long run enabled them to continue to produce tremendous quantities of one-way, throwaway containers (72% of which, in the case of plastic PET containers, ends up in American landfills today). As it had with public water supplies, the company was simply tapping into another municipal stream, only this one contained packaging materials, not water.

Coca-Cola has not been the only company to follow this path to big profits. Software firms, such as Microsoft (MSFT), have made tremendous revenues selling its Office suite, relying on other businesses to produce expensive hardware that can turn Microsoft’s code into consumable products. You can find an extreme version of Coca-Cola capitalism on Wall Street, where brokers do not manage any kind of production or distribution infrastructure but instead make money off transaction fees as commodities flow from one buyer to another.

In short, Coca-Cola (KO) capitalism has become the model for some of the most profitable firms of our time. This is what 21st century capitalism rewards.

But the question remains: does this system benefit the public at large? The history of Coca-Cola reveals that the firm demands a great deal of public resources—recycling systems, subsidized municipal water, corn subsidies, etc.—and it is not at all clear that Coke transforms these investments into goods that serve the interests of the nation (do we really need more sugar water in a country in which over 30% of the population is obese?).

While Coca-Cola is shifting towards healthier drink options, especially bottled water, the price for providing this service should appear unconscionable to the informed consumer. Americans pay more than $4 for a gallon of Dasani water when they could easily enjoy the same quantity of clean water from their tap for a fraction of a cent. Perhaps our money could be better spent fixing public water systems—which currently need over $500 billion in repairs, according to the EPA—rather than purchasing Coke’s bottled water. After all, as Coke’s history makes clear, private citizens and Coca-Cola need public pipes to survive.

Bartow Elmore is a professor of U.S. history at the University of Alabama and is the author of Citizen Coke: The Making of Coca-Cola Capitalism.