Justice for mayo? Round two in the condiment conflict 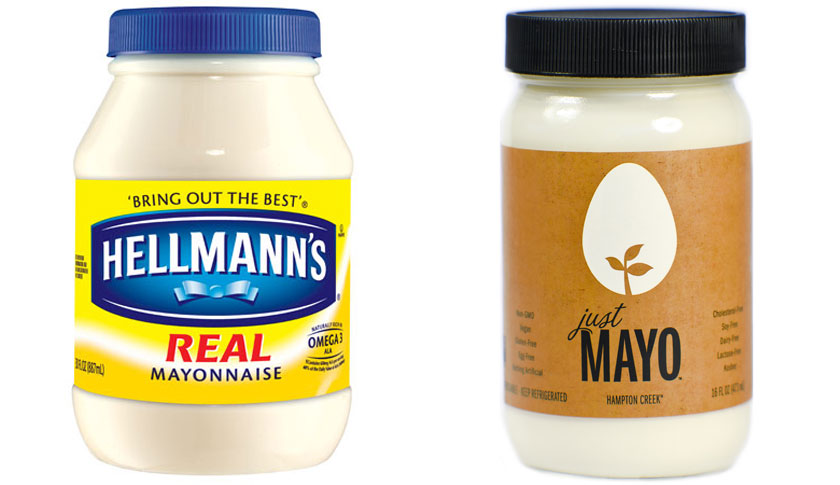 Some two weeks ago multinational behemoth Unilever sued San Francisco-based startup Hampton Creek, claiming that its vegan Just Mayo product—which Unilever acknowledges is taking market share—is not really mayonnaise because it doesn’t contain eggs. Hampton Creek has countered that it is not violating the standard of identity because it calls its product “mayo.”

Here’s the latest twist: Some of the mayonnaise products made by Unilever, the company behind Hellmann’s and Best Foods brands, don’t follow the definition of mayonnaise that it’s attempting to hold Hampton Creek to, either. The company has made changes to its website, apparently leaving it with an egg-based product on its face.

In one instance, Unilever altered two customer reviews on its Hellmann’s Olive Oil Mayonnaise Dressing page, adding the word “dressing” to comments that hadn’t previously used the word. Although the product contains eggs, it is not 65% oil, which is also required under the U.S. Food and Drug Administration’s definition of mayonnaise. (Unilever has since deleted the two altered reviews.)

All of our products in the marketplace are labeled very clearly and comply fully with FDA regulations. Consumers know what they’re getting. We received a letter from Hampton Creek raising concerns about our website content. The next week we made changes to the website. Two consumer comment excerpts in the advertising section of our website were inadvertently edited when they should have been removed. There’s a big contrast between us and Hampton Creek—we took action and they still refuse to make changes to their misleading label.

Hampton Creek CEO Josh Tetrick tells Fortune that the company sent a letter to Unilever on Nov. 4 pointing out a number of labeling issues on Unilever’s website. He says Hampton Creek did not hear back, but last Friday his team noticed that Unilever had made some of the changes to the site.

Unilever also added the word “dressing” when making reference to its Canola Cholesterol Free Mayonnaise on its website. To take you deep into mayonnaise regulations, Tetrick noted that product labels can violate the standard of identity when they make a nutrient claim like low fat, but “cholesterol free” is not considered a nutrient claim.

“The truth is the whole thing is confusing,” Tetrick says. That’s why, he says, he’s eager to be in talks with regulators. “We understand it’s important to be on the right side of the standard of identity,” he adds. “We believe we are, and we continue to have important and productive conversations with the FDA.”