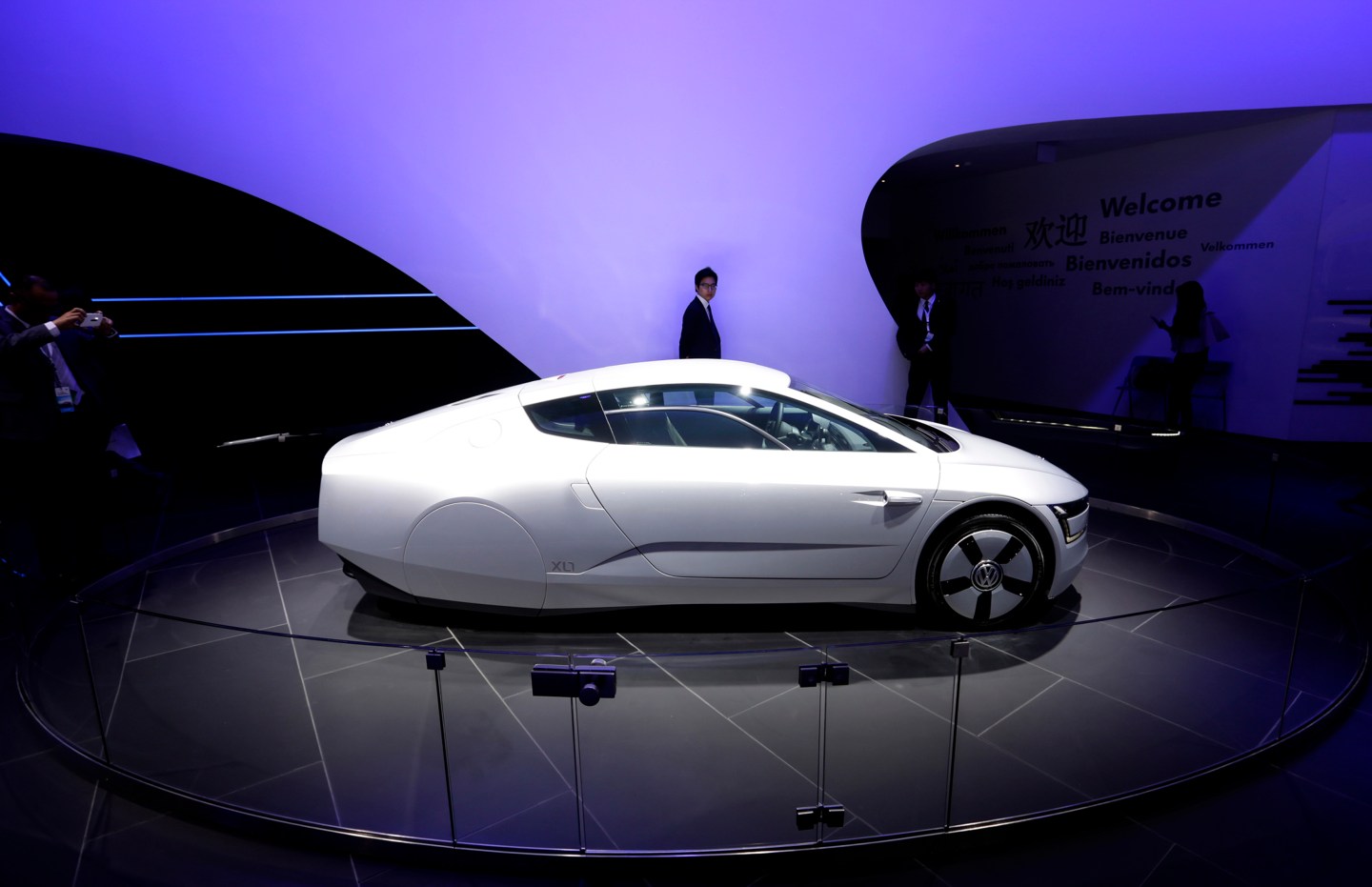 “Innovative” has become, it seems, a trite descriptor, since marketing departments plaster the word everywhere. So who is actually investing the most in research and development? As it turns out, companies are spending more on R&D than ever before. The Global Innovation 1000, a list of public companies that spend the most on innovation, last year invested a record $647 billion, an increase of $9 billion over the previous year. That total represents two-fifths of all innovation spending by organizations worldwide, according to a report from Strategy&, the consultancy formerly known as Booz & Co.

Where does all that money go? Over the past decade, two industries have accounted for half of all R&D spending: healthcare and computers. Other resource-intensive industries include healthcare, autos, and software. Fortune combed through the annual reports of Strategy&’s top 10 to learn more about how big companies spend their R&D budgets. Here’s what we found.

For the third year in a row, the German carmaker tops the Strategy& list of research and development spenders. Volkswagen says its spending results from being a “highly competitive and innovative car manufacturer which must fulfill a whole host of environmental and safety standards.” Much of that spending has gone into hybrid vehicles and adding new technology, including semi-autonomous features to some of its 12 brands. It also is looking to reduce CO2 emissions across its fleet and invest in ways to electrify vehicles.

The South Korean conglomerate claims second place once again. Its many R&D centers range from Silicon Valley to Bangalore to Beijing. The company says it is developing a smart TV monitor and a smart TV service as part of its research program. Domestically, Samsung breaks R&D into three organizations: business unit development teams that have a one-to-two year development outlook; research institutes that have a three-to-five year development outlook; and the Samsung Advanced Institute of Technology, which works on projects with a further line of sight.

The Santa Clara, Calif.-based chip manufacturer invests in R&D to keep pace with Moore’s Law, an observation by company co-founder Gordon Moore in 1965 that computing power doubles every two years. As the company works to cram more transistors onto its circuits, development eats most of the company’s R&D spending. “It’s getting more expensive to do the development piece of it because wafers get more expensive over time as more steps get added to the process,” says Michael Mayberry, vice president and director of components research at Intel. “Complexity drives cost.” One recent example of the company’s R&D efforts includes the 14nm Intel Core M processor, which is half the size of the previous generation of chips with 20% longer battery life and 60% less energy expenditure.

Microsoft, the biggest spender among software and Internet companies, likes to refer to the “small r” and the “big D.” The company prides itself on developing products for the current market while searching for the next big thing. With more than 1,000 doctorate-holding researchers, its research program contributes to nearly everything the company ships today—one of the latest examples being Microsoft Band, a wearable device that aims to help people live a healthy and more productive life. Over the years, other technologies emerging from the company’s R&D program have included Xbox 360 and Xbox One, Kinect and Skype Translator.

WORKING IN THE CHEMISTRY LABORATORY IN BUILDING 92, ROCHE BASEL

Leading the healthcare industry in R&D spending, the Swiss biopharmaceutical company spends more today than it did when it topped the Strategy& list three years ago. The company invests an overwhelming majority of its R&D budget —almost 90%—on pharmaceuticals, while the rest goes into diagnostics. Oncology, the largest part of Roche’s business, eats about half of its pharma R&D spending. One of the company’s latest drugs, a targeted medicine for advanced breast cancer called Kadcyla, was approved in the U.S. and E.U. last year. Roche says it is looking to leverage parts of the Kadcyla platform (for instance, the innovative way it links chemotherapeutic agents and antibodies) for future drugs.

The logo of Swiss drugmaker Novartis is seen at its headquarters in Basel.

As the second-biggest health care spender, Novartis invested nearly 17% of its revenues into R&D in 2013 and has more than 200 projects in clinical development, including 138 in pharmaceuticals. Among the big discoveries from its R&D program was the drug Zykadia, which treats patients with a certain form of lung cancer and, in August, the company presented data on its drug LCZ696, an investigational heart failure medicine, showing it was superior to the current best treatments. And in October, an advisory committee to the FDA approved unanimously to support the approval AIN457 (secukinumab) for the treatment of moderate-to-severe plaque psoriasis.

Toyota Motor Corp's prototype fuel cell vehicle (FCV) sedan car, which has the same body design as the one will launch in 2015, is unveiled during a news conference at the company's showroom in Tokyo June 25, 2014. Japan's government and top carmakers, including Toyota Motor Corp, are joining forces to bet big that they can speed up the arrival of the fuel cell era: a still costly and complex technology that uses hydrogen as fuel and could virtually end the problem of automotive pollution. Toyota, the world's biggest carmaker, unveiled its first mass-market fuel-cell car on Wednesday, which is due to go on sale in Japan by end-March next year priced at around 7 million yen ($68,600). A U.S. and European launch will follow in the summer. REUTERS/Yuya Shino (JAPAN - Tags: BUSINESS POLITICS TRANSPORT ENERGY) - RTR3VMI9

The Japanese automaker's biggest R&D investment areas include environmental and hybrid systems like electric and fuel cell vehicles as well as safety technologies, like vehicle dynamic control and crash safety performance. In its Q2 financial results, the company reported that these technologies are “a foundation for future growth. We will focus our investment in these areas.”

A logo sits on a wall inside Johnson & Johnson's innovation centre in London, U.K.

The American health care company has long prided itself on investing in R&D and for the past five years has consistently been among the top spenders in the pharma industry. That investment has paid off big, with the pharmaceutical business launching 14 new compounds since 2009. J&J says it plans to file more than 10 new drugs and 25 line extensions between 2013 and 2017.

WASHINGTON, DC - APRIL 23: Googles Lexus RX 450H Self Driving Car is seen parked on Pennsylvania Ave. on April 23, 2014 in Washington, DC. Google has logged over 300,000 miles testing its self driving cars around the country.

Known for pursuing moonshot R&D projects, the Mountain View, Calif.-based Internet company has invested in seemingly outlandish technologies such as self-driving cars, computer eyewear and balloon-distributed Wi-Fi. The company employs about 18,600 people in research and development according to its latest annual report, and most of its R&D costs go into staffing and personnel support. According to Google's annual report, "our product development philosophy is to launch innovative products early and often, and then iterate rapidly to make those products even better."

The N.J.-based pharmaceutical company lists its top R&D investment priorities as oncology, infectious diseases, vaccines, and diabetes. This year Merck received approval from the FDA for an immuno-oncology drug called Keytruda that treats a dangerous form of skin cancer known as advanced melanoma. “We see Keytruda and immuno-oncology drugs as a fundamental change in how we treat cancer patients,” says Dr. Roy Baynes, senior vice president of global clinical development. Merck is also extending studies of the drug to more than 30 other tumor types, he says.