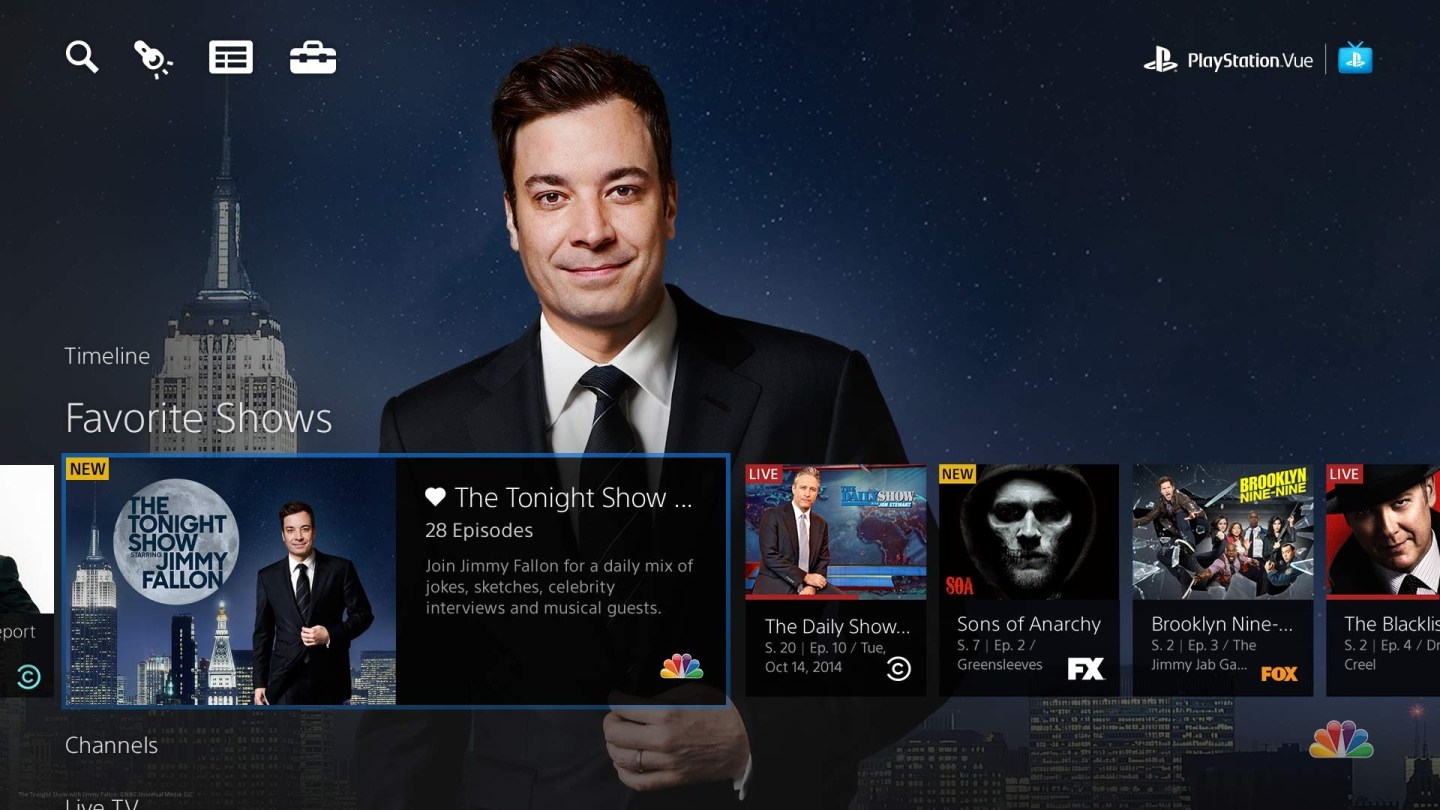 Sony Computer Entertainment will begin testing its own television service, PlayStation Vue, with select PlayStation Plus gamers in New York City this month before expanding to Chicago, Philadelphia, and Los Angeles. The subscription service, which will be delivered over the Internet and launch in the first quarter of 2015, will allow PlayStation 3 and PlayStation 4 owners to cut the cable cord or sever satellite service with a line-up of 75 networks at launch.

Gamers with a console and broadband connection will be able to view shows from studios like CBS, Fox, NBCUniversal, Discovery Communications, and Viacom live or on demand without long-term contracts. One big studio that has yet to commit is Disney (DIS), which eliminates ESPN and ABC from inclusion. Andrew House, president and group CEO of Sony Computer Entertainment and the executive in charge of its Network Entertainment Business, said Sony is currently talking to additional content partners.

“Sony is trying to be an early leader in the over-the-top market,” said P.J. McNealy, CEO at Digital World Research. “It is highly likely that not only will Apple enter this market soon, but also a slew of other hardware and service providers at CES next January.”

Sony (SNE) has a large global audience that already watches on-demand programming through its PlayStation Network, which currently offers individual and season pass options for hundreds of TV shows. Sony has a global installed base of 80 million PS3s and 17 million PS4s, according to Michael Pachter, video game analyst at Wedbush Securities.

“There’s a clear trend toward over-the-top or ‘virtual cable’ TV services, but a 75 channel line-up in a handful of markets at a TBD price point isn’t exactly a clear and present danger to the status quo,” Ward said. “The key questions will be how much people will be willing to pay for a service that offers a quarter or one-fifth of the typical number of cable and satellite channels—and whether Sony’s pricing is going to be in line with that perceived trade-off.”

Peter Warman, CEO of video game research firm Newzoo, said consumers have come to expect the availability of video content through services like Netflix (NFLX) across all screens and interfaces, including consoles. But he believes Sony should focus more on gaming.

“Sony’s reach in the U.S. will never be as big as that of local TV providers such as AT&T, Verizon or Comcast, making exclusive content deals a challenge,” said Warman. “Rolling out a service like this internationally requires going about IP and format ownership structures, as well as making local deals with TV stations. This effort is underestimated. I would rather see console manufacturers focus more on game developers and the gamer community. They could do more in satisfying the (smaller) developers’ desire to run games as a service and be flexible in business models, as well as facilitate the increasing demand of gamers to create and share in addition to offering a unique game experience. I believe video content could turn out to be a distraction.”

Sony and Microsoft have both upped their game when it comes to positioning their consoles as the centerpiece of the living room entertainment experience with PS4 and Xbox One. Even Nintendo, which previously had ignored more conventional types of entertainment (often referred to as “linear”), launched the free TVii service for Wii U intended to enhance the television experience for consumers who have satellite, cable, Amazon Instant Video, Hulu, Netflix, or TiVo.

“Sony’s, Microsoft’s and Nintendo’s live TV integration still leave a lot to be desired,” Ward said. “As on-demand streaming platforms they’re all pretty solid. Like a dozen other boxes, they’re fully capable of streaming Netflix movies and so on. But for live TV, I don’t really use the console interface. Microsoft’s snap feature is cool on Xbox One but it doesn’t integrate with my surround sound system, so I wind up fumbling around for my normal remotes anyway. Sony’s service is different in that it’s bringing live TV services to the table for customers who want to cut the cable or satellite TV ‘cord’ entirely.”

House said PlayStation Vue will connect gamers to content that is popular, new, or trending. A “smart” Search feature narrows down results quickly, and the Explore function allows users to filter the entire catalog of available live and on-demand content by type of program, genre, ratings, popularity, length, and other parameters. Viewers can save up to 500 shows to the cloud without storage restrictions or scheduling conflicts. Once viewers tag a show as a favorite, they will automatically have access to episodes of that show for 28 days so that they can watch on their own time. PlayStation Vue will be offered on a month-to-month basis without fees for installation or cancellation.

Sony plans to bring the service to Apple’s iPad and other devices at a later date.

McNealy said Sony has shown a new spark to move beyond just its own hardware. It recently launched its own game, CounterSpy, for Sony devices as well as those using Apple’s iOS and Google’s Android operating systems. “It shows that Sony has figured out there is life beyond Sony hardware,” he said. “And they better find it because consumers are spending time on multiple touch points.”

PlayStation Vue is part of a recent expansion in Sony’s cloud-based efforts. After acquiring streaming technology firm Gaikai in 2012, Sony has rolled out a beta version of PlayStation Now across its Bravia televisions and PlayStations 3, 4, Vita, and TV. The service includes 150 PS3 games that can be streamed from the cloud without the need for a gaming console.

“We view PlayStation as the best place to play, whether it’s through PlayStation Plus or games or original entertainment content like Powers,” said John Koller, vice president of marketing, Sony Computer Entertainment. “Content is king in our industry. Morpheus [Sony’s Oculus Rift-like virtual reality system], PS4, and PS TV all catering to different experiences—this is part of what is going to make PlayStation special.”

With Verizon, Dish Network, and other companies expected to soon enter the fray, Sony will savor the head start.

Next, read: “The ratings system that could change the TV industry forever” by Peter Suciu