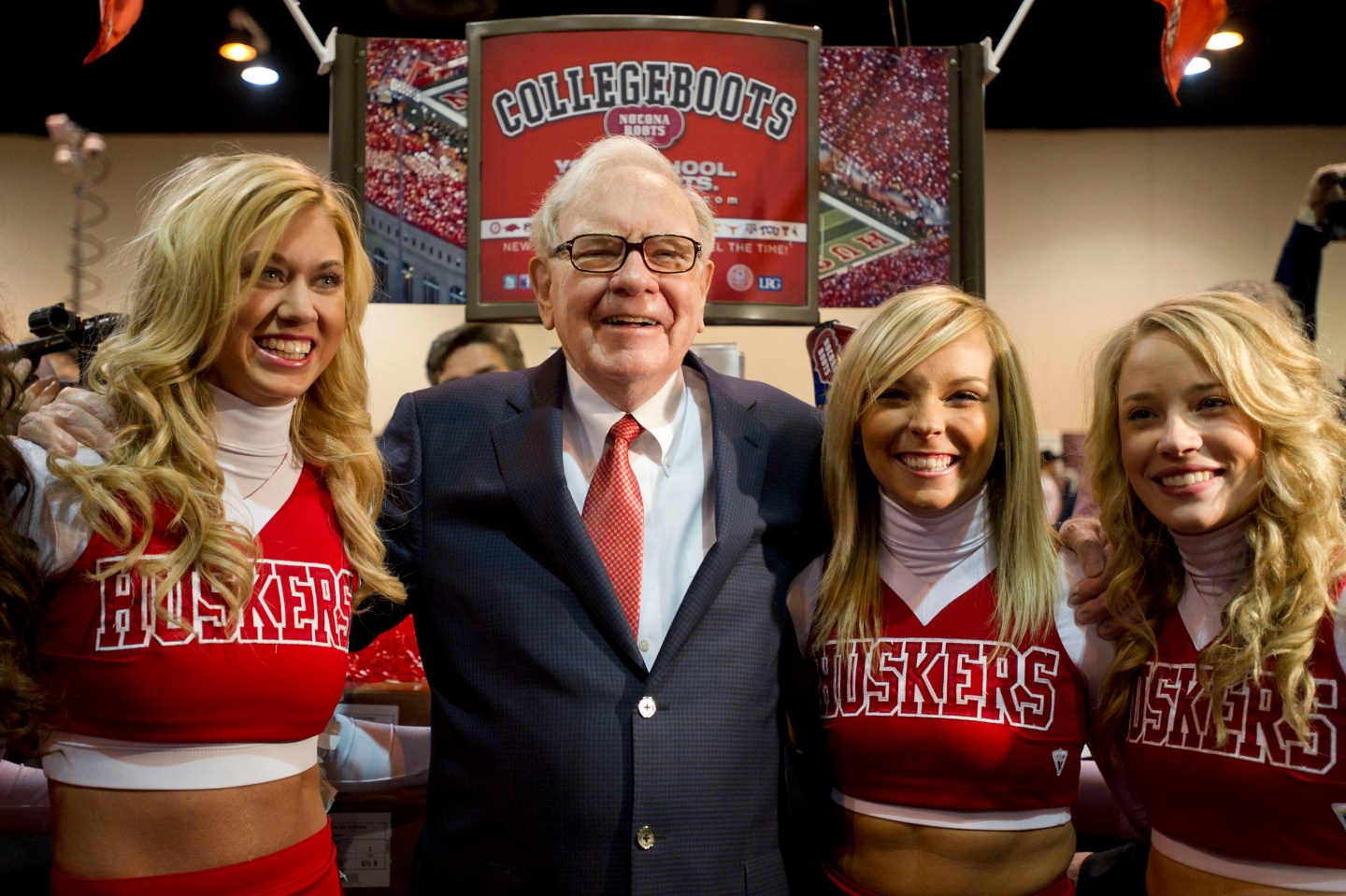 Warren Buffett, chairman of Berkshire Hathaway Inc., stands with University of Nebraska cheerleaders during a tour of the exhibition area of the Berkshire Hathaway shareholders meeting at the Qwest Center in Omaha, Nebraska, U.S., on Saturday, April 30, 2011. Berkshire officials estimate that as many as 40,000 people will attend the meeting in Omaha, and shareholders are eager to hear what Buffett has to say about former executive David Sokol. Photographer: Daniel Acker/Bloomberg via Getty Images
Photograph by Daniel Acker — Bloomberg via Getty Images

Some of the nation’s most powerful men have belonged to fraternities during their school days – business leaders included. For the women, female politicians-in-the-making are no strangers to sororities, although it appears that just two of 26 female CEOs in the Fortune 500 joined the organizations in college.

But from Warren Buffett to Douglas Oberhelman, numerous male CEOs in the top 50 companies of Fortune’s elite group of businesses gained leadership skills in fraternities back before achieving business greatness. Here are a few of those stories.

The North-American Interfraternity Conference helped provide information for this article.

Before he became CEO of the second largest company in the nation, Rex Tillerson was an Eagle Scout. He also enrolled as a student at the University of Texas in Austin where he pledged the Alpha Phi Omega fraternity. Tillerson gained a reputation in school for being straight-laced and ambitious. "Rex was one of those guys who just gave you a great feeling," said James Flodine, a fraternity brother of Tillerson's, in a February interview with the Dallas Morning News. "But he went to school for a purpose, and it wasn’t to drink beer and goof off."

Fun fact: Alpha Phi Omega boasts it is the largest service fraternity. The organization includes over 25,000 active members and an extensive alumni group of 400,000.

Warren Buffett may be referred to as the Oracle, but there's much more to the man than investing. He's the guy who joined Paul Anka to croon Frank Sinatra to over 400 women at Fortune's Most Powerful Women summit in October. He even predicted Hillary Clinton will win the 2016 election.

But before all that, Buffett was in a fraternity: Alpha Sigma Phi to be exact. As a student at the University of Pennsylvania's Wharton School, Buffett joined the organization. He transferred to the University of Nebraska after, hence the sweatshirt in the image above.

Fun fact: In 2013, Buffett made headlines by joining Twitter. "Warren is in the house," the Berkshire Hathaway CEO boasted on the micro-blogging social media network. His fraternity welcomed him to the digital age with open arms. "Welcome to Twitter, Brother Warren Buffett, Penn '48!" an Alpha Sigma Phi account quipped back.

At Dartmouth, Jeff Immelt became well-known for his prowess in football on the JV team. The 6'4" Immelt pledged Phi Delta Alpha fraternity, where he served as president. He's in good company, too. The General Electric CEO stands beside other famous frat brothers and Dartmouth alums including the billionaire Trevor Rees-Jones and Pulitzer winners Joseph Rago.

(Not so) Fun fact: In 2010, years after Immelt's time at Dartmouth and as president, the frat house burned down "due to a chimney issue," according to the fraternity's blog.

Ever wonder what it would be like to get initiated into a fraternity by a future U.S. president? When Boeing CEO W. James McNerney Jr. was pledging Delta Kappa Epsilon at Yale University, George W. Bush was the fraternity’s president. “[Bush] initiated us and he enjoyed the pomp and circumstance,” McNerney said in a 2007 Chicago Magazine article.

In addition to his fraternity membership, McNerney also played hockey and baseball at Yale. After graduating in 1971, he entered the corporate world and went on to work at Procter & Gamble, McKinsey, GE and 3M before he made his way to Boeing. “It feels good to keep succeeding. It feels great to see the people you work with grow and achieve,” he said in a 2006 Fortune article.

Fun fact: When assessing potential new members, “Dekes” look for the Three Qualities of a Deke-the Gentleman, Scholar, and the Jolly Good-Fellow, according to the DKE membership criteria.

Before becoming the CEO of Procter & Gamble, Alan G. Lafley was president of his sophomore class at Hamilton College (class of 1969) and a fraternity government member of Psi Upsilon. He said he prides himself on making friends at numerous houses while enrolled at the university, including many who were “independents.” “I was a member of Psi U, but I didn't go with the herd,” he said in a 2007 Hamilton College article.

Fun fact: Founded in 1833, Psi Upsilon is the fifth oldest fraternity in the United States.

After graduating from University of Pennsylvania's Wharton School in 1981, Comcast CEO and Chairman Brian L. Roberts took his father's cable provider business and turned it into a global Fortune 50 company. Long before he was featured on Fortune's Business Person of the Year list, Roberts pledged Zeta Psi when he was an undergraduate at Penn. Part of the fraternity's mission statement states that "Zetes come together to have fun [and] enjoy life." And what does Roberts do when he's not working? He's an All-American squash player, and earned a gold medal with the U.S. squash team in 2005.

Oberhelman, the son of a John Deere salesman, had always liked heavy equipment, so in 1975 when Caterpillar offered him a job as a credit analyst straight out of college, he took it. He never imagined he'd be there for life or ever become CEO ("I'm not sure I knew what a CEO was then," he says), but his outlook changed with each new interesting opportunity. Oberhelman was sent to South America, a stint that coincided with the Latin American debt crisis and involved re-possessing equipment; and later to run operations in Japan. "When things are challenging, experience is wildly helpful. You appreciate what's going on in the business. And I know virtually all of the top 350 leaders here—I have my entire career," he says. He makes sure to get out of the Caterpillar bubble, however: Oberhelman prioritizes time with peer CEOs to make sure he is pushing and changing the company as fast as he needs to be.

In his college days, Caterpillar CEO Douglas Oberhelman was a fraternity member of Sigma Alpha Epsilon – the nation’s largest social college fraternity. Oberhelman continues to keep close ties with his alma mater, Millikin University (class of 1975). In 2011, he announced an $11.5 million investment to support the creation of a new university center, to help renovate Millikin’s oldest residence hall and to double the number of students who participate in a scholars program.

(Not so) Fun fact: This year, Sigma Alpha Epsilon made a “historic decision” and banned pledging from all of its chapters in an effort to prevent hazing. “As an organization, we have been plagued with too much bad behavior, which has resulted in loss of lives, negative press and large lawsuits,” said SAE's eminent supreme archon Bradley Cohen in a Founder’s Day video.