Kabam CEO Kevin Chou on how to create a hit game 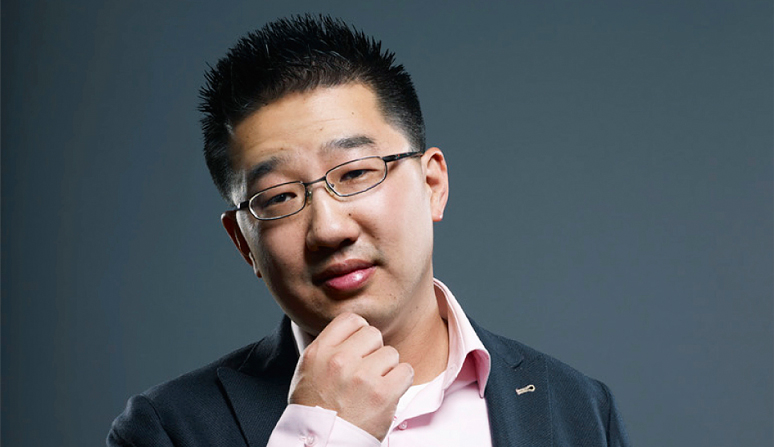 A game that feels seamless and easy to play is often far from easy to make.

That’s the idea behind the addictive mobile games developed by Kabam, which has harnessed the “free to play” model of offering free games but while layering on extra content for a fee. In eight years, co-founder and CEO Kevin Chou has taken the company from a tiny startup to $360 million in revenue and a $1 billion valuation. Last month, the company reported a $120 million investment from Alibaba.

Just days after landing at no. 25 on our 2014 40 under 40 list, Chou spoke to Fortune about nearly going under during the 2008 financial crisis, the secret sauce to a great game, and how the company is setting its sights on China for future growth.

Fortune: Not every gaming executive is a gamer themselves. Have you always been one?

Kevin Chou: I’ve loved games since I was a little kid. In high school, I was a world-ranked StarCraft player. It’s funny, just the other day, my wife was showing me this YouTube video where a dad took all his son’s games and threw them out on the lawn in a big pile and drove a lawn mower over them. When I was a kid, it wasn’t quite that bad, but certainly my parents wanted me to do something productive. So it’s been a great dream come true to turn something I loved into a great business.

What was Kabam’s first big hit?

The first game to become a runaway success was Kingdoms of Camelot [distributed over Facebook]. It was a medieval strategy game about being a knight—it was the type of game I love. There were complications back then, in terms of the technology of delivering a game over the Internet. You couldn’t create the type of games you would expect to see on an Xbox or PlayStation. So we couldn’t create a sports game. We couldn’t deliver that level of graphic capability over the Internet. So we went with a strategy game because, if you think about playing Settlers of Catan, or Risk, there aren’t a whole lot of cool graphics you need. It’s much more about making decisions, working through consequences of those decisions, and battling against other players.

You’ve said your decision to move into the pay-to-play environment was influenced by the 2008 financial crisis. Can you talk about that?

We lost 90 percent of our revenue from 2008 to 2009. That’s a lot of salaries you can’t afford to pay anymore. We said, “We’re not going to recover our advertising revenue anytime soon. So what do we do about this?” Meanwhile, “mini games” were driving a lot of engagement. And we saw a broader trend that gaming was coming to Facebook and using this free-to-play model. That is kind of when we went all in on gaming. We decided to just build games and not depend on on ad revenue—just ask the players to pay for the (premium content) on the games. And it turned out to be a great business over time.

How did you end up working with Hollywood on some of your games?

The gaming business used to work a lot with Hollywood, but more recently the companies are more focused on their own games. So a lot of the big Hollywood companies were looking for new types of gaming companies to do deals with. When they launch a movie, they generally want a game to go with it. So they started coming to us, noticing we were making good Facebook games. After a couple of those kinds of calls, we actually said, “let’s explore what this looks like.” We started with The Godfather. In the beginning, we were really concerned because, if we made a game ourselves, we could make money and not have to share it with anybody. We were tiptoeing our way into it. But The Godfather was a great deal for everyone because it wasn’t that premium sort of title where the legal team felt like they needed to extract every last pound of flesh to do a deal. We loved the I.P. involved. We love games about crime and houses fighting with each other. So we made that game a huge success with Paramount. Warner Brothers started calling us, and then MGM. That is when we did a Hobbit game. Universal gave us a call, and we did Fast and Furious 6. We just announced we are doing a big Marvel project. We understand the model now, we understand what we can bring to the table.

Is the goal of these games to mimic the movie, or go further?

There are other game companies that have tried to mimic the movie, where the appeal is to relive the movie and immerse yourself in it. There are certain types of games that do well with that. That is not our strategy. Our strategy is always to explore another element of the movie that you may see touched on a little bit in the movie or the book. We basically take that and create a whole new storyline around it. We still obviously want to use the characters and story and environment that made the movie so great. But we don’t want to be limited to the content that is in the movie. Ideally, a big success for us is to have a game that is still running for five to 10 years. Our very first game that we released almost five years ago, Kingdoms of Camelot is still going very strong today with hundreds of thousands of people playing it every month. If you just follow the script of a movie, you can stretch a two-hour movie into a hundred hours. But you can’t make a game that lasts for years.

Are there any types of movies that you wouldn’t turn into a game?

Certainly, we think about the demographics of a movie. Documentaries are not something that we would create a game around—that’s probably super obvious. Something like a comedy would be harder to create a game play around. Game of Thrones is good example: there’s a lot of sexual content and extreme violence in that show. If we made a game about it, those things probably wouldn’t appear in our games. Or The Godfather is a good example. We will show a horse’s head in a bed, but we won’t go through the actual, more graphical parts.

Has there been any character or storyline that got you into trouble?

When you are trying to sell a video game for $60 dollars at Best Buy, you see more of that. “Wow, did you hear you can go into an airport and mow down a bunch of civilians in this game,” or something. Everyone gets up in arms about that, but guess what? It makes people go to Best Buy and pay $60 to see what it’s all about. With our games, it’s very different. We turn the model around. You can download the game for free, so it’s easy to check out the game and start playing it, see if you like it or not. But it’s our job to kind of make sure we are doing really cool stuff within the game to keep you coming back tomorrow and the day after that. It doesn’t really serve us that well to create this crazy thing in the game that causes an uproar. We have to do the math in terms of whether it might turn off our current player basis or not.

What makes a great game that people will want to pay for?

You have to create a game with what we call chase. You want to pick up the game and be able play it within a few minutes. There needs to be something about the game that hooks you. From there, you need the chase: you feel like you really want to do whatever it is you’re doing in the game. Maybe you want be the most badass superhero, a certain type of superhero that you love. That is what we are doing for Marvel. We want to create something that makes you say “wow” and leaves you willing to play the game for several months to get that thing in the game. We want it to be exciting from the very first few minutes. We aren’t expecting people to pick up a game and play it for two hours and never play it again. To make our business work, we have to build a long-term relationship with the player.

MORE: Kevin Chou realized it’s not about the paycheck

Where is the next big market you need to conquer?

What types of games do you plan to roll out in the future?

We have been really focused on strategic games. We’ve done a racing game. We’ve done a couple of sort of light action games. Now you will see us expand to a few other categories of games beyond our core. It’s almost like we have been making comedies our whole life and we are now going to make action movies, or something like that. We feel very confident about moving into a few other types of games. One of the big ones will be a fighting game. Our Marvel game will be a fighting game: your superhero against another superhero, kind of Street Fighter 2 style. We are really excited.