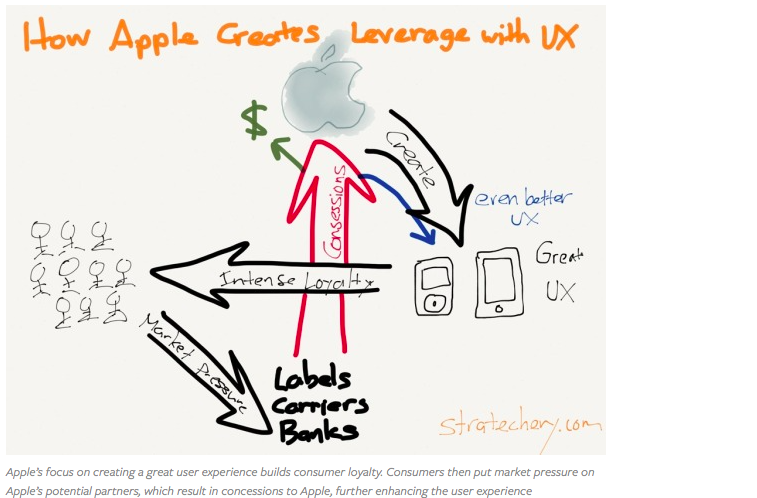 If there’s one thing we’ve learned from the bankruptcy of GT Advanced Technologies it’s that Apple under Tim Cook bargains just as hard as it did when Steve Jobs was alive.

If those terms were one-sided — and when Squiller spells them out they certainly look that way — it’s not just because Apple is big and GT small.

Apple’s strength at the bargaining table — its leverage — comes from a deeper place. It was evident in 2003, when a smaller and much weaker Apple talked the five major record labels into selling music a la carte on iTunes for $0.99 a song. As Stratechery‘s Ben Thompson explained last week:

It turned out Apple had [an] ace in the hole: a customer base that, while small, had an outsized willingness and ability to spend. After all, they had already dropped at least $1,500 on a Mac and iPod (and likely a lot more), what was an extra $0.99? At a more basic level, said customers were loyal to Apple not because it made sense from a feature or price perspective, but simply because they loved and valued the experience of using Apple products. That, ultimately, was the key to Apple’s favorable position: they had the best customers because they had the best user experience; if the labels wanted access to them, they had to agree to Apple’s terms.”

Thompson’s article is a brilliant companion piece to Squiller’s bitter declaration. Both open up a black box that Apple works hard to keep locked.

According to Thompson, the leverage Apple wields over all its suppliers — large and small — stems from its focus on the user, one of the company’s core values. As Thompson puts it in the set-up to the attached illustration:

Apple builds incredible user experiences, which gains them loyal customers who collectively have massive market power, which Apple can then effectively wield to get its way — a way that involves maximizing the user experience. It’s a virtuous circle.”

Virtuous or not, this self-reinforcing market power is the leverage that Apple wields in negotiations with partners of all sizes, from tiny parts suppliers to world’s largest mobile carriers.

And it’s how Apple, according to Thompson, will eventually win over CVS, Rite Aid and the other retailers still holding out on Apple Pay.

See: How Apple Creates Leverage, and the Future of Apple Pay