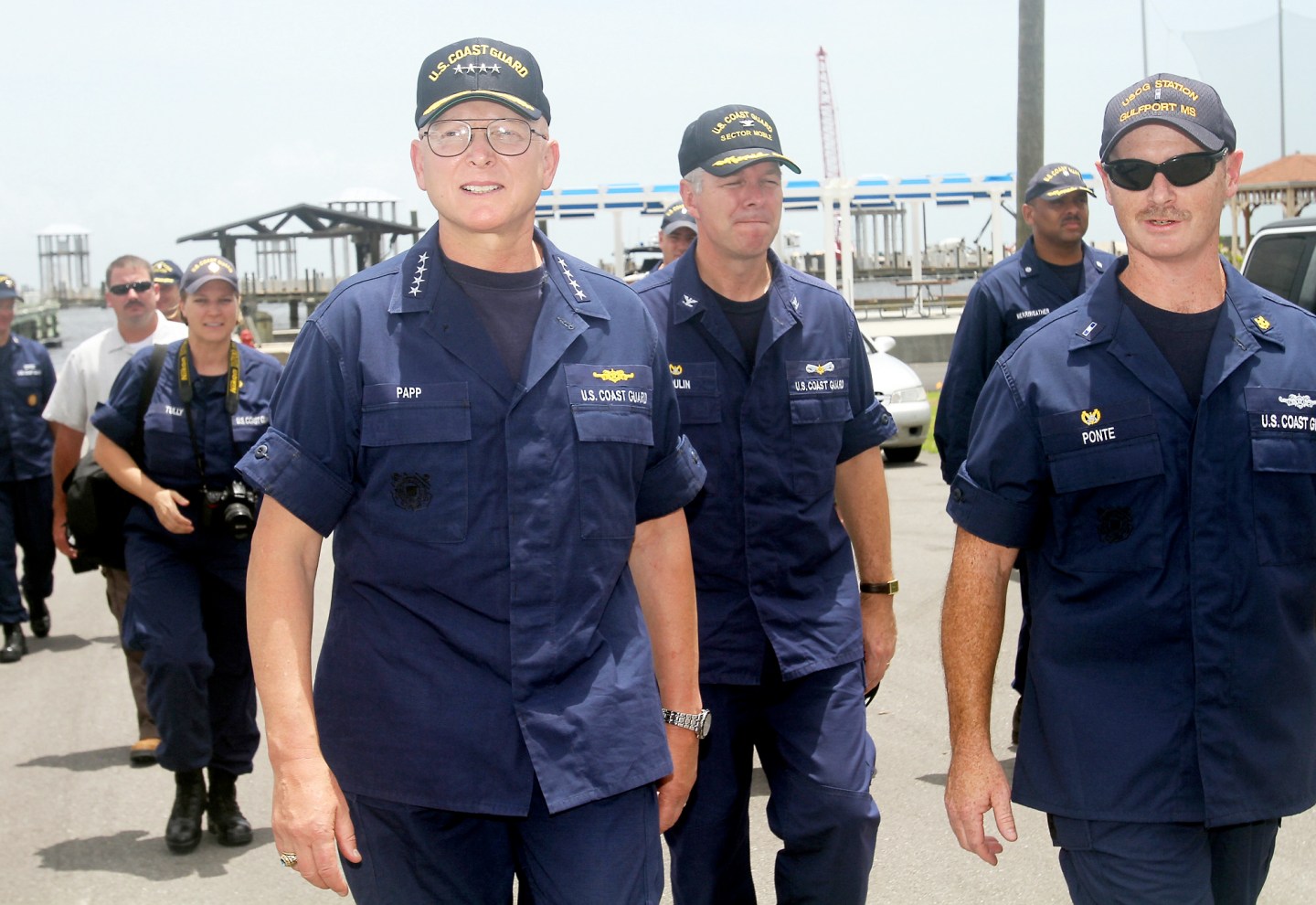 Recently appointed as the nation’s first special representative for the Arctic, Admiral Robert Papp arrives in the region just as Russia and Canada are clamoring for a piece of its vast oil and gas reserves, and as Shell is exploring for oil in American waters.

In his first interview with a business magazine since his appointment, Papp — who spent four decades with the Coast Guard — talks to Fortune about drilling in the Arctic, working with Russia amid the current geopolitical turmoil, and the need to invest in everything from icebreakers to deep-water ports.

Fortune: Talk about what your priorities will be in your new role.

Papp: As you look down on the earth from above the North Pole, what you see is a large ocean with an ice cap surrounded circumpolar by land with people on it. It’s a maritime environment … The rest of our country, the lower 49 states are well developed whether it is Hawaii, California or New York. We have well established and secure and safe ports and regimes to keep prosperity, trade and economics going. In Alaska, it truly is a frontier. Now that oceans are opening up and maritime traffic is increasing and maritime trade is increasing, we need to do similar things for our Arctic regions, in particular for the United States, Alaska where we don’t have developed ports, where we don’t have good navigation systems, and where we don’t have good nautical charting. A truly great nation will also look out after environmental security of the waters and land it has responsibly for. There are wide range of issues up there. First and foremost for me is maritime governance and stewardship. Then we have two buckets we have put projects into. One is adapting to climate change and the other is the economic and well being of the Arctic people.

Fortune: You take on your job at a time when things are really opening in the Arctic.

Papp: You see people at either end of the spectrum whether it is exploring, exploiting or economic development whatever e words you want to use. Perhaps my perspective has been formed by my Coast Guard experience. I have spent four decades in that service and it really shaped and formed my view of the world. An area that I worked in not too many years ago was the Great Lakes which are shared waters with Canada. There are environmentalists who have literally asked for the Saint Lawrence Seaway to be closed down and to stop shipping from going into the Great Lakes. Of course, there are probably some industrialists that would prefer to have unfettered access to the Great Lakes and not have to worry about ballast water cleaning and things like that. The reality is everybody has right to his or her own belief and opinion. What reasonable people do, what leaders do is they bring these groups together to try and form consensus to respect the legal rights of people who want to conduct commerce but requiring them to do it in an environmentally sound manner. Trying to find that balance is the challenge whether you are a Coast Guard officer or a diplomat.

Fortune: Would you support drilling in the Arctic?

Papp: I support drilling that is done in an environmentally sound manner which follows all the guidelines and preparations and policies that are established by the Department of the Interior. When I went to Alaska during my visit in August, I listened to everybody. I listened to the Alaska natives. I listened to the NGOs, the environmentalists, the academics. But I also met with Shell, ConocoPhillips and BP while I was up there to learn a little more about what their interests are. I remain convinced that, even though they are in it for a business, they understand fully they need to protect the environment. The Arctic provides us with different challenges than some of the drilling that goes on in other areas of the world. They are not insurmountable but they have to be done in a very deliberate and circumspect manner. I believe the oil companies are doing that and, believe me, they are getting plenty of oversight as they do it. Yes, I support it but we have to keep in mind the rights of the indigenous people up there. Along the North Slope, there is the Bowhead whale corridor. There will be no drilling within that corridor, no leases sold because that is a traditional migrating route for the whales. This was based on science and also in consultation with Alaskan natives using their traditional knowledge. So, I think you can bring all parties to the table, respect their opinions and come up with a balanced approach.

Fortune: What is your response to environmentalists who say the region is too pristine and remote to allow drilling?

Papp: It clearly is pristine. I have not met a sailor in my life that is not concerned about protecting the ocean. That is certainly first and foremost in my mind but also people have a legitimate legal right to conduct commerce and business and industry. But it has to be with regulation and forethought and doing it in a safe manner. I believe it can be done. Norway has been drilling for many years in the Arctic. We have some challenging conditions in the North Sea. While that is not in the Arctic, there is plenty of drilling there. Russia has been doing it. We have been drilling off the North Shore. Prudhoe Bay, yes, it’s landside. But companies built islands out into the water and are drilling there in a responsible manner. The water they will be drilling up there will be fairly shallow and most scientists believe the oil is under less pressure which improves your margin for safety.

Fortune: The United States is set next year to take the chairmanship of the Arctic Council which includes Russia. Any concerns geopolitical tensions over Ukraine could spill over into the Arctic discussions there?

Papp: At this time we are able to keep Ukraine issues separate from those that are affecting the Arctic. Clearly as a country, we stand united with many other countries around the world in condemning the actions that have occurred in Ukraine and we are concerned about the separatists and support for separatists from Russia. We believe the Arctic is strategically important for the United States. We need to have continued cooperation with the Russians because they own an awful big part of real estate up there … They are part of the eight Arctic nations on the Arctic Council. Anything we do within the Arctic Council has to have consensus of all eight countries before we move forward so we need Russia’s cooperation.

Fortune: Have there been any territorial disputes with Russia or Canada in the Arctic so far and how will they be handled?

Papp: We know pretty close where the boundaries are. That goes back to the (United Nations Convention on the) Law of the Sea discussion (which has never been ratified by the Senate). In fact, in the border between the Yukon territory and Alaska and the Beaufort Sea, there is an area of dispute between Canada and United States where we have counterclaims on parts of the exclusive economic zone on the offshore there. It’s very small but an illustration why we need to accede to the Law of the Sea so we have standing and a venue to negotiate these claims. Russia, we have a very clear boundary with them. But what is in dispute or negotiations is how far the Outer Continental Shelf goes which would allow countries to extract oil and mineral rights from the bottom of the sea. Both Russia and Canada are doing surveying and pursing claims so they can extend their Outer Continent Shelf. We are doing surveys … within what we believe is U.S. territory. But right now, we have no standing because we haven’t acceded to the treaty. As time goes on and if there is need for energy and petroleum, countries will be looking to exploit the Outer Continental Shelf and Canada and Russia will have claims and companies in all likelihood will invest in drilling out there. I don’t believe any company will invest in drilling within the Outer Continental Shelf claims of the United States until we have confirmed that through the Law of the Sea treaty.

Fortune: Talk about your concerns about developing the Arctic especially parts of Alaska.

Papp: They don’t have a deep-water port up on the North Slope of Alaska. In fact, the nearest port is down in the Aleutian Islands. That is about 800 to 1,000 miles away. So at some point in time with further development and trying to help the economic prosperity of people in the Arctic, a port is going to have to be developed in the north. There is a need for communications. There is no fiber optics up in Alaska tying these towns together. Any information has to be bounced off satellites with microwaves which are tremendously ineffective right now. Renewable energy is a big issue. We have many villages up there still relying on diesel generators running 24 hours a day to provide energy. We need companies to invest and people to look at small grid power systems, combinations of wind and diesel, thermal energy, hydro electric energy things that can be tailored for these individual villages depending on their location. There is crying need for clean water if you can believe that. It’s a tremendous challenge up there … When we talk about economic well being, we are really in some instances starting at the basics of food, water and shelter up there. I see that as a tremendous potential for companies to invest and come up with solutions that may solve those issues.

Fortune: What about spending on icebreakers, satellite networks?

Papp: The United States is woefully inadequate in terms of its icebreaker fleet right now. We have only two operational icebreakers and only one heavy icebreaker. We haven’t invested in many, many years in our icebreaker fleet. As a maritime nation, as an Arctic nation, we need to have assured access to the Arctic in all conditions at any time of the year. We do not have that right now.

What will you be aiming to do at the Arctic Council when you take on the chairmanship?

Papp: The Arctic Council has done some fine things but it’s time to strengthen the Arctic Council now that we have increasing traffic, increasing interest in the Arctic. Make it a body that really makes a difference … One of the most import things for the Secretary (of State John Kerry) and myself is we are going to have a bully pulpit, the microphone for the next two years. It’s time to raise the awareness of the American public. There are about 750,000 people that live in Alaska who are very conscious of the fact that we are an Arctic nation. But you have got 49 other states that often don’t think about the Arctic. We have to get them thinking about the Arctic because those are Americans up there as well. We have about 50,000 that live above the Arctic Circle and they are entitled to the same safety, security and prosperity as the rest of our nation.