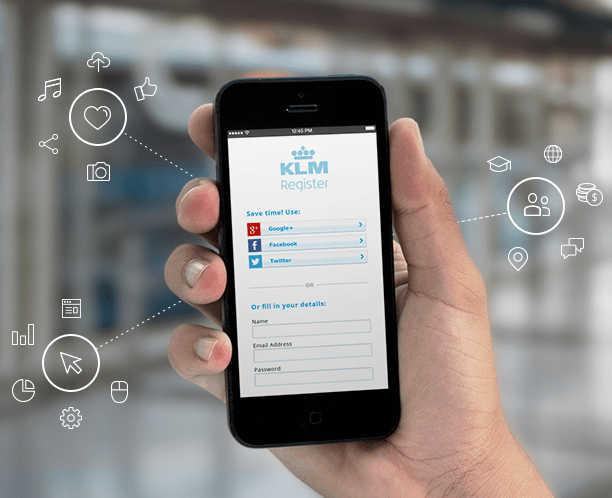 On the Internet, everybody wants to know whether you’re a dog.

Social networks, advertisers, businesses, and government agencies have seized upon the digital world and worked to cajole anonymous Internet users into revealing themselves. Facelessness is no longer is standard operating procedure on the web—not if Facebook CEO Mark Zuckerberg can help it, anyway. Should we be concerned?

Not as much as we should, according to Gigya, a Mountain View, Calif. company that makes software to allow you to log into websites using your existing social media accounts, such as Facebook, Twitter, and Google+. Founded in 2006, the company has gleefully ridden the wave created by the rise of social networks. It has served as an intermediary between 2.5 billion people and the more then 700 businesses that pay it, among them Fortune 500 fixtures Nike (NKE), Pepsi (PEP), and Disney (DIS).


Our social norms around anonymity on the Internet have shifted considerably over the last decade. Among the companies most hostile to the concept? Gigya. In a way, anonymity is the company’s adversary.

“Some companies are crossing the line and people are moving to anonymous interactions as a last resort,” concedes Gigya CEO Patrick Salyer. He cites Target’s well-documented misstep around a teen girl’s pregnancy as one example of a company intruding on shoppers’ privacy. Despite this, Salyer is adamant that identity will trump anonymity in the end. “If you create an anonymous web,” he says, “you create a worse web.”

In general, businesses want and need to know who their customers are. It’s one reason why so many websites force people to create accounts—so they can better identify and serve their clientele. That workflow is a weak proposition to most customers, but if it can be wrapped into a “local coffee shop experience” where the payoff is allowing a vendor to know a person’s name, tastes, and routines—something that many people actively desire—the interests on both sides can align.

That’s why Salyer says he goes to the same Starbucks every day. The baristas know his usual (a grande latté), ask about his kids, and even know to call their signature size a medium, “because I hate the word ‘grande,’ I find it obnoxious,” Salyer says, “The only thing worse than that is ‘venti,’ which I literally have never said to them.”

Gigya believes it can meet businesses and customers in the middle by helping individuals manage their data and share only what they are comfortable sharing. On Tuesday, it will announce that it has raised an additional $35 million in funding, its seventh round, led by Intel Capital (INTC) and bringing the company’s total raised to more than $100 million.

“What they’re doing is killing cookies,” says Navin Chaddha, a venture capitalist at the Mayfield Fund, which participated in the round. Tracking cookies, the traditional way sites have monitored visitors’ browsing activity, are a terrible tool, Chaddha says. In conversation, he called them “dumb,” “annoying,” and “the worst form of spam.” Though they have crumbled as mobile device adoption has increased—they’re typically not supported on such devices—they remain persistent in conventional desktop computing environments.

“Giving your I.D.? That’s not a cookie. That experience is very different,” Chaddha says. What Gigya offers is a sort-of customer relationship management system: “A way beyond ads,” he says.

Dannon, the world’s leading yogurt maker, is one company that uses Gigya’s software to help manage its relationships with customers. The firm offers coupons through its digital properties and encourages its customers to create accounts to receive notifications when discounts become available. By enabling social login and registration with single sign-on across its sites—that’s where Gigya comes in—Dannon avoids forcing families to create an account for each brand in its portfolio, which includes Oikos, Activia, and Danimals.

“We’re very good at making yogurt, but for technology we lean on partners,” says Ryan Saghir, a spokesperson for the Dannon Company, about the decision to partner with Gigya about a year ago. “Relevancy is king—to make sure that we’re being as relevant to our consumers as possible.”

Another Gigya customer, KLM Royal Dutch Airlines, uses its services to offer a Meet & Seat mobile app that allows people who opt in to see who else is on board their flight. It even lets people choose seats next to one another based on their social information, all in the name of improved customer experience.

“We would have a bottleneck if we didn’t have folks like Gigya enabling organizations to easily accept other third party IDs,” says Mary Ruddy, a research director on Gartner’s identity and privacy strategies team. “There are lots of cases where you can have better interaction if you share a little information about yourself.” There’s value in ease of interaction, she adds. Gartner estimates the market size for identity and access management as a service to be $215 million as of the end of last year.

You may recoil at the thought of granting a company access to more of your personal information—your likes and dislikes, your friends and family, video from your best friend’s wedding. In truth, few people are aware of the data trails they already leave during their Internet activity. A privacy study conducted by Intel and released earlier this month found that nearly two-thirds of device owners have no idea who has access to data from their devices or how it is used. Gigya maintains that the benefits of connecting personal accounts to other sites exceed the costs when handled transparently.

One of the earliest attempts at banishing anonymity online, a late 1990s service called Microsoft Passport, never quite took off. Meanwhile interest in Gigya’s services, which aggregate more than 50 different kinds of third-party identities, has been growing: the company, which has 325 employees, says it has booked double the number of sales meetings this year as it did last year.

Salyer says he believes there was no compelling reason—no clear value—for people to implement the failed Passport, even though the technology itself, he says, was a decent solution to the problem of authentication online. With the advent of social networks, the value of identity has became clearer, he says. As payment services begin to take off, that value becomes clearer still.

Plus, let’s face it: logins are a hassle. For the average Internet user, Gigya is poised to play a part in laying anonymity to rest. Look out for an unmarked grave.