Why the Steve Jobs memorial in St. Petersburg was removed 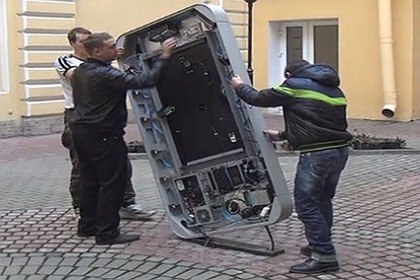 How out of touch is Russia these days? Here’s a cultural data point:

Last Friday, one day after Apple CEO Tim Cook spoke publicly for the first time about his sexual orientation, a monument to honor Steve Jobs was removed from the grounds of a St. Petersburg technical college.

As you can tell from the photos, it wasn’t a granite statue or anything like that. It was more like an oversized iPhone with a touch screen that displayed information about Jobs and the company he co-founded.

But it had to come down, according to a Russian news report, for two reasons: (pardon the crude translation)

* “The execution of the law prohibiting propaganda of homosexuality among minors”

* “The revelations of a former employee of the National Security Agency, USA Edward Snowden, according to which Apple products transmits data about its users to the American secret services.”

Maksim Dolgopolov, president of the Russian company that put the thing up, told Biznews-FM that he had no idea when he paid for it that the story of Apple’s success was actually, in his words, “a smokescreen for a special operation, the NSA of the USA.”

Radio Free Europe/Radio Liberty, which also carried the story, dealt with the NSA bit by leaving it out. The only reason for the removal that it gave was that Tim Cook came out as gay in a country with laws against homosexual “propaganda.” No mention of Snowden or the U.S. spy agencies.

I can see why that might be a sensitive area for the Prague-based broadcaster. Until 1972, Radio Free Europe was funded by the CIA.

Apple, for its part, has denied Snowden’s allegations. “There is no back door,” Cook told ABC News anchor David Muir in January. “The government doesn’t have access to our servers. They would have to cart us out in a box for that.”
Apple does, however, respond to court orders. From its privacy policy page:

It may be necessary − by law, legal process, litigation, and/or requests from public and governmental authorities within or outside your country of residence − for Apple to disclose your personal information. We may also disclose information about you if we determine that for purposes of national security, law enforcement, or other issues of public importance, disclosure is necessary or appropriate.”