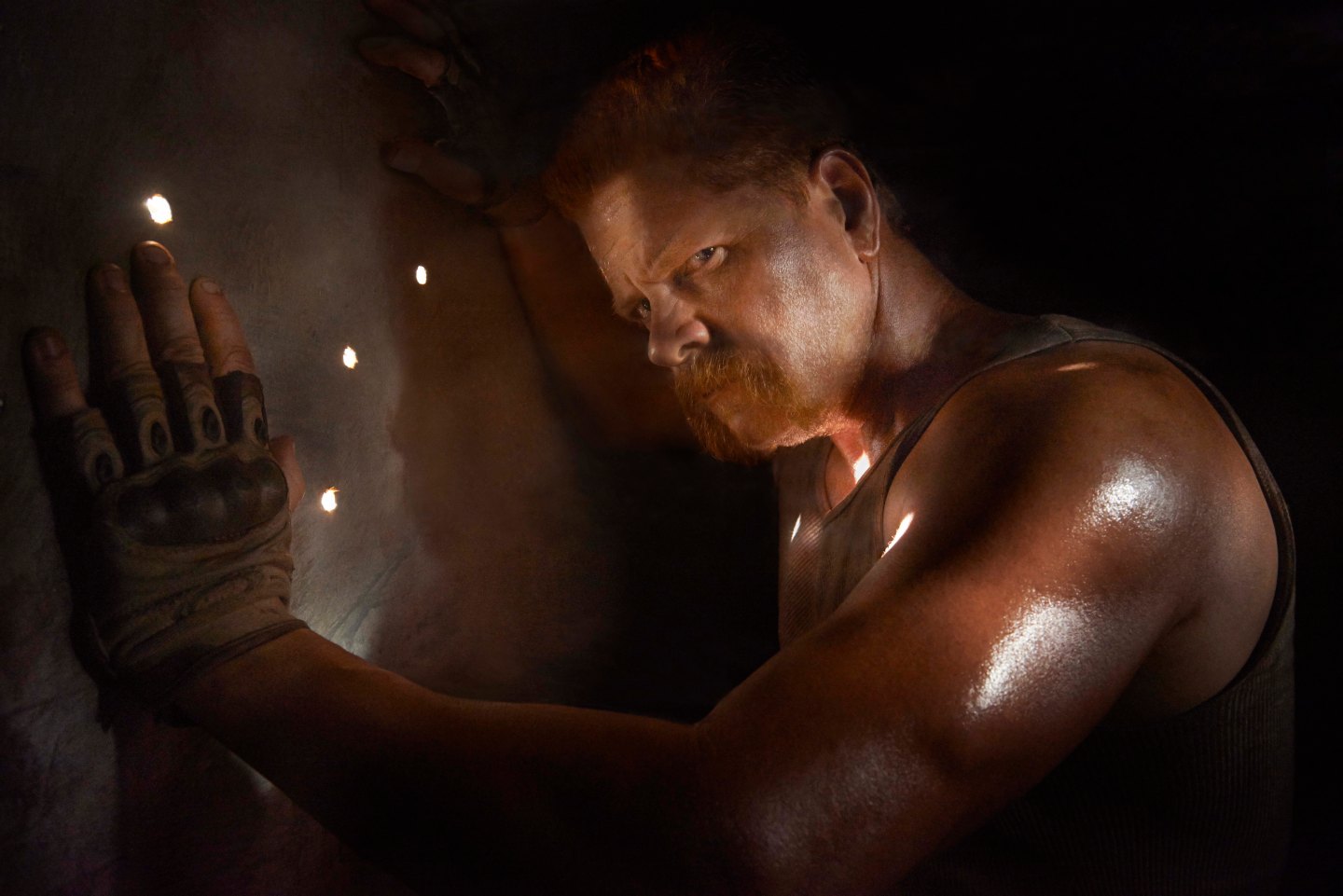 Actor Michael Cudlitz has become an instant fan favorite bringing Robert Kirkman’s Sgt. Abraham Ford to life in AMC’s (AMCX) hit series, The Walking Dead. The actor has also worked with Activision (ATVI) and multiple game studios on five Call of Duty games since 2005. That makes Cudlitz part of two of the most popular active entertainment franchises out there today. The actor, who has appeared in 24, Lost, Southland, and more over his 25 year career, talks about zombies, video games and iPhones in this exclusive interview.

Fortune: What’s it been like stepping into this world of The Walking Dead?

Cudlitz: In a lot of ways it’s been life changing. And certainly in some aspects, career changing. Playing a very iconic alpha male character on what happens to be the number one show in the world has brought a lot of eyeballs on me. And that means that in addition to having a lot of attention, there are a lot of fans who follow the show and support the show, and in turn want to follow and support you. I’ve been fortunate enough to have be doing this for 25 years professionally, and I’ve never had this kind of fan reaction to anything I’ve done in that entire time. Nothing’s even come remotely close to the response from the people who follow the show and watch the end product. I can’t go anywhere, especially in Atlanta. My private life is just going away and it’s been immense. And that translates into potentially down the road being able to take your fan base with you when you go somewhere else.

What are your thoughts about The Walking Dead comics and what Robert Kirkman has been able to do with that medium?

They’re terrific actually. It’s a wonderful character study. It’s like Lord of the Flies for adults. It’s like a huge social experiment. He’s taken this world and removed the infrastructure and everything that we live by that we thought was correct, and looks at how would you rebuild society. What kind of governments would you come up with? What kind of hierarchies would you come up with? And what makes a good person in that world? It’s like everything’s been redefined as things are in a war, but when you take all the rules and you throw them out, and if you have an opportunity with a clean slate to come up with completely new rules, what would those rules be? It’s an awesome question to ask.

In a recent episode this season Rick Grimes tells the priest, “This is my family and if you hurt them, I’ll kill you.” What is the dynamic of the core group of actors, and how have you been able to fit in with that group since entering the show?

It’s a perfect way to actually describe what happens when you come down here and you start working on the show. Once you have been accepted by the group, you are family. And once you become part of that family, you realize that you get a like-minded mindset and you know that no one will fuck with anybody and if they do they have to deal with all of us. It very much is life imitating art in this case, as opposed to the other way around. We’re all we have out here. We’re these transplanted actors who are in the middle of nowhere. Our families aren’t here. Our children aren’t here. Our support systems aren’t here. We’re even removed from the city when we’re working. We’re very far out. We’re not in the Stone Age, but we’re very far away from your typical city things when we’re working. Everything closes pretty early out there, so all that becomes left is the show and everyone in it. In that case we really do mimic what we’re going through in a very small way. It’s a great launching pad or a great fertilizer to the world that we’re growing on the show.

There are multiple mobile, console and PC games set in this universe. Have you played any of The Walking Dead games?

I can’t play video games because I get too nervous. It just stresses me out. And it’s not about thinking that I’m going to get killed by these zombies. I just get too anxious about pushing the right buttons. Ever since Pong it has never calmed me down, and it’s never going to be a relaxing thing for me to do. It winds me up like a maniac. I’ve done voices on a lot of these games, so I’ve seen a lot of them. My kids play a lot of the stuff and they love them, but for me it’s not helpful.

The Walking Dead episodic games from Telltale Games might be your speed because it’s more adventure game and less twitch game.

Twitch games. I love that. That’s what I do. I twitch during them. I freak out.

Plus Robert Kirkman worked on the games.

I may check that out. I know Kirkman’s been terrific about character. Everything comes from that seed, and it’s all there. Scott Gimble has found a wonderful way to translate everything from the comic into television because it’s a different form of storytelling, but Kirkman’s really done a nice job finding these wonderfully complicated and different characters and putting them in this world and smashing them together for really awesome results.

What’s your favorite technology or gadget that you use on set and why?

My favorite is my phone, and it’s mostly because it allows me to keep in touch with my family when I’m at work, even though AT&T has the sketchiest service in Atlanta that you’d ever want. Please put that in there and tell AT&T I asked them to please fix that.

What phone are you using out there?

I’m on an iPhone 5, and I’m going to upgrade when I get home because it’s just dirty and messy out here. That would be bad to get an iPhone 6 and be in the mud for two more months.

You’ve worked on a lot of the Call of Duty games. What are your thoughts on how far the technology has come with performance capture being employed for new games like Call of Duty Advanced Warfare with Kevin Spacey?

Games are another place to find work, not only the voice stuff but in the motion capture stuff. It’s exciting work. It’s cutting-edge, so I look forward to doing more of it. I just had a really good time when I did my voice work for Call of Duty. I’ve had nothing but great interaction with Activision. The reason I haven’t done the last few is because I have not been available. I’ve been out of the state working, but I was in every one of them from Call of Duty 2 forward. The Band of Brothers cast all got together. We were all different voices for The Big Red One and the launch of their Call of Duty 2, and then after that I stayed with them and did multiple voices on all kids of different Call of Duty games.

Activision comes out with a new Call of Duty game every year so there’s always opportunity for you to work on the next one.

Exactly. And I hear this next one is getting a lot of positive reviews, so I guess the technology is very different and the gameplay itself has evolved to a whole different level. Even though it makes me nervous to play these games, I love them and I love the work that goes into them. Some of the music that’s composed for these games is just epic, as good as anything out there. They use world class composers and artists, so it’s exciting.