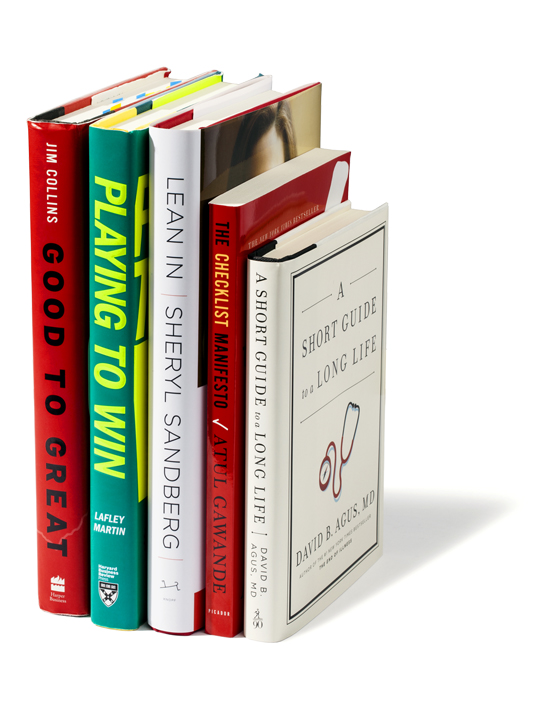 Education doesn’t stop after B-school. Now, neither does required reading, as more companies are handing out books to employees. CEOs like Cisco’s John Chambers have even asked senior executives to read up before attacking tough problems. Here are some management guides favored by CEOs.

A Short Guide to a Long Life by David Agus

Who says work reading has to be strictly business? Agus’s guide covers everything from health FAQs to tips for preparing for doctor’s visits. Pam Kehaly, president of Anthem Blue Cross, distributed 200 copies to her staff, CBS gave copies to all its employees, and Michael Dell passed out 1,000 copies. “We are passionate about health and the vital role better information can play to improve outcomes and reduce cost,” Dell said in a January interview with Fortune.

The Checklist Manifesto by Atul Gawande

Harvard Medical School professor and New Yorker writer Gawande trumpets the power of the humble checklist to save lives. Jack Dorsey, founder of Twitter (TWTR) and now CEO of payment processor Square, makes it required reading for new employees. For the past three years Square has given out copies during new-employee orientation as well as stocked it in the company library. A Square spokesperson says checklists keep every­one focused and on the same page.

Playing to Win by A.G. Lafley

Procter & Gamble (PG) CEO Lafley increased the company’s market value by more than $100 billion, which he explains in his 2013 book while laying out the rudiments of designing a business strategy. And business leaders are paying attention. Playing to Win has earned praise from the likes of Jack Welch and Boeing (BA) CEO Jim McNerney, and last year Meg Whitman organized an offsite for her senior executives that focused entirely on discussing the book—Lafley even spoke at the event.

Lean In by Sheryl Sandberg

With Lean In, Sandberg brought women at work to the top of meeting agendas. Literally. On International Working Women’s Day (March 8), Cisco (CSCO) CEO John Chambers distributed 400 copies and sent a memo to his top managers asking them to read Lean In before trying to brainstorm potential solutions to work-related problems. “After reading Lean In and listening to Sheryl, I realize that while I believe I am relatively enlightened, I have not consistently walked the talk,” he wrote.

Good to Great by Jim Collins

No business book list would be complete without at least one title penned by leadership guru Jim Collins. His bestseller Good to Great, published in 2001, has sold more than 8 million copies and explains how companies can catapult from mediocrity to brilliance. Levi Strauss CEO Chip Bergh loves Collins so much he asked 125 company executives to read four of Collins’s books: “Jim is an academic and a researcher, and because of that his work is provocative and insightful.”

This is story appears in the November 17, 2014 issue of Fortune.