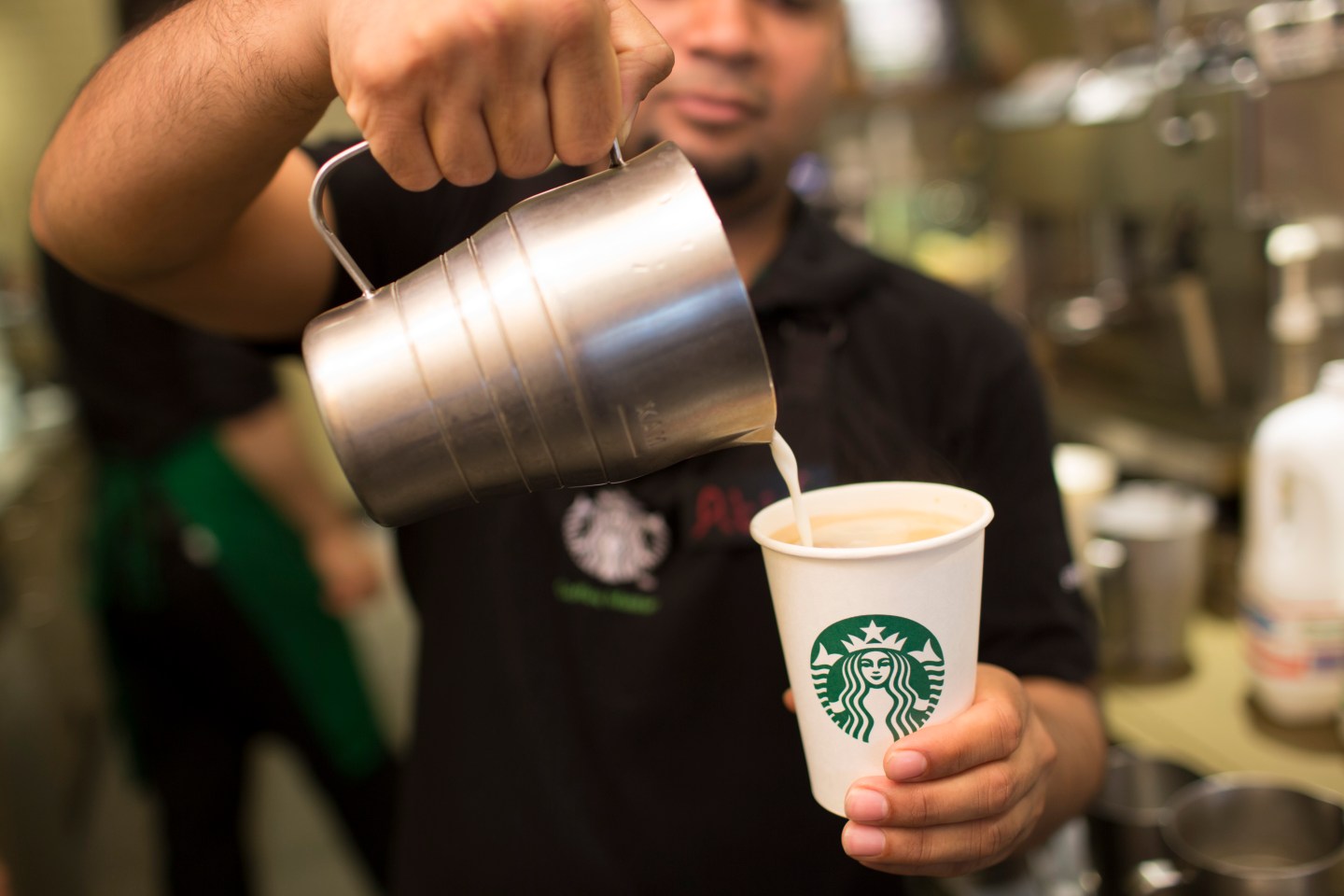 An employee pours milk into a cardboard coffee cup inside a Starbucks Corp. coffee shop in London, U.K., on Monday, June 9, 2014. U.K. services companies' confidence rose to a record this quarter, indicating continued expansion in the largest part of the economy, the Confederation of British Industry said. Photographer: Jason Alden/Bloomberg via Getty Images

Starbucks has reported a 10% increase in fiscal fourth-quarter sales, a period when the coffee giant’s results benefit from early demand for the popular Pumpkin Spice Latte. Here are the most important points from the earnings report.

What you need to know: Same-store sales jumped 5% in the Americas region, below the 6.2% increase projected by Consensus Metrix. This is the quarter when Starbucks benefits from the launch of its top-selling seasonal beverage: the Pumpkin Spice Latte, affectionately known as PSL. The drink’s popularity is so strong that Starbucks even began to sell it early this year for some select customers. But analysts continue to overestimate how well Starbucks is performing. This quarter was the seventh time out of the past nine quarters that overall sales weren’t as strong as analysts had expected. Investors appeared to focus on the sales miss, sending shares (SBUX) down about 5% in after-hours trading.

But sales are still rising, and Starbucks isn’t just benefiting from the nation’s love of the pumpkin-flavored concoction. The company has developed new beverage offerings and revamped its food menu in moves analysts say can help bolster store traffic throughout the day. Part of that efforts includes the expansion of the company’s move to tackle the tea category with the Teavana brand, as well as moves to sell handcrafted sodas at thousands of stores and other newer initiatives like the testing of three flavors of Greek-yogurt smoothies.

The company is also focusing on the high-end coffee market, with plans to sell rarer coffees it often sells for a limited time at 1,500 locations globally, as well as open at least 100 stores that would be designed to sell those rare coffees exclusively. Executives have said the coffee business is its core focus, and it will introduce new customized espresso beverages and cold coffee drinks to stay ahead of the competition.

The big number: Starbucks overall sales leapt to $4.18 billion for the quarter ending September 28, while adjusted profit totaled 74 cents, up 23% from a year ago. Analysts surveyed by Bloomberg had projected $4.24 billion in sales and a 74-cent profit. Same-store sales at company-owned stores rose 5% across the entire company, falling short of the 5.9% Consensus Metrix estimate. Starbucks has now reported global same-store sales growth of 5% or more for 19 straight quarters.

What you might have missed: The strength of Starbucks’s results contrasts with the results of many well-known food and beverage and retail names. McDonald’s (MCD), Coca-Cola (KO) and PepsiCo (PEP) were all among the food and beverage companies facing challenges with customers. But the Starbucks brand is still resonating, and also winning in the coffee aisle. Key rival Dunkin’ Donuts (AKAM) reported U.S. same-store sales grew just 2% in the latest quarter, and the company warned it would be hard to achieve the low-end target of growth between 2%-3% for the full year.