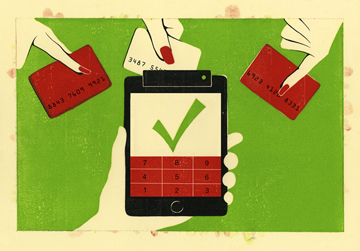 Call it too much of a good thing for small retailers: Their stores are so busy that the checkout lines snake out the door, prompting some customers to leave without buying. Store owner Gordon Russell saw that happen each summer season at his In the Pink retail chain, which dots tourist destinations like Cape Cod and Martha’s Vineyard. Last spring Russell took a page from Apple and turned his store associates into mobile cashiers.

The traditional checkout counters? Ripped out in all eight stores and replaced with racks of merchandise. Store clerks, armed with iPad minis, have become roaming fashion consultants who can pull up a customer’s history, check inventory at other stores, and ring up a sale moments after a customer steps out of the dressing room.

Four months after moving to mobile point of sale, the $10 million retailer witnessed a 23% jump in same-store sales compared with the same period a year prior. Says Russell: “We were able to serve more customers more quickly and let them get out the door and on with their day.”

Thanks to the low cost of iPads and new mobile-payment services like Square, more small retailers are doing the same. In fact, mom-and-pops lead the way when it comes to mobile checkout, accounting for 85% of the mobile point-of-sale systems installed in stores today, according to research firm IHL Group. IHL projects that in the next three years, mobile POS systems will replace up to 20% of existing systems in stores today. “It’s growing tremendously,” says Greg Buzek, IHL’s president.

There’s good reason: IHL contends that consumers spend 20% to 25% more when checking out with a clerk standing next to them than they do in a traditional across-the-counter transaction. Notes Buzek: “By standing side by side, you’re working on a problem together.”

Mobile checkout is cheaper, depending on how often you replace equipment. It can cost $6,000 to install a traditional system. By contrast, an iPad costs $400 to $700. (Both stationary and mobile systems require about $1,000 in annual costs for various software and maintenance.)

For rudimentary mobile checkout, apps like Square offer free card readers; they charge per transaction. For more robust cloud software that lets you see what is selling and what isn’t and individual buying patterns, services like Revel Systems, Lightspeed, and ShopKeep charge $49 to $79 a month, plus $669 to $3,000 for hardware such as a credit card reader, receipt printer, cash drawer, and an iPad stand. (Cloud software is cheaper for stationary systems: Retailers that use touchscreen devices and software can pay less than $50 a month.)

Russell of In the Pink is so enamored of mobile checkout that he started another company, Springboard Retail, that makes it available to other store owners. Smarter, cheaper, more mobile systems with real-time data in the cloud, he says, will give small retailers a big competitive advantage. Says Russell: “It’s huge.”