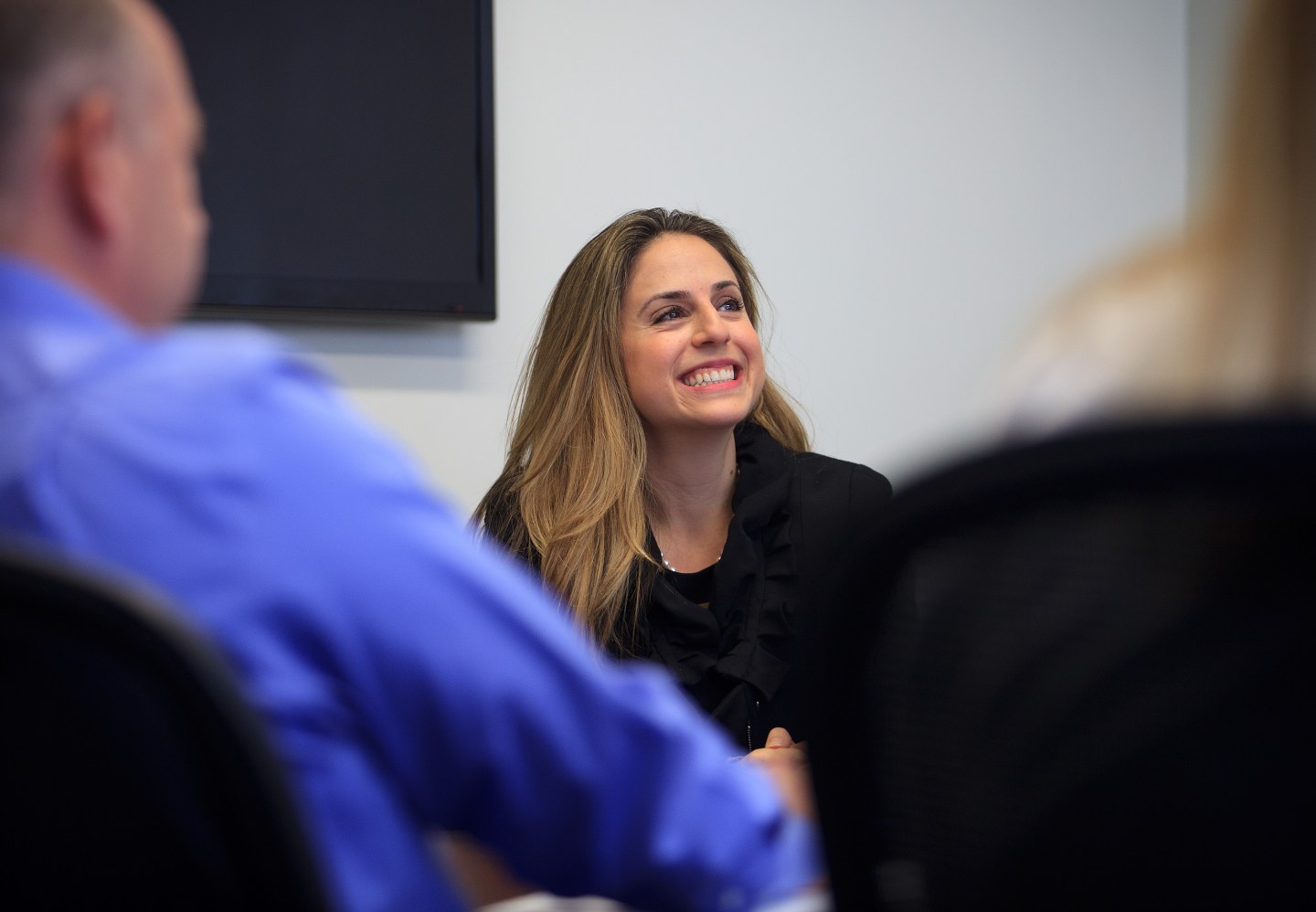 This week, Facebook and Apple announced a benefit that perked up female employees’ ears: Both tech companies will cover the cost of egg freezing. It’s good news for more than women at Facebook (FB) and Apple (APPL). The fertility industry will also benefit from this corporate shift.

Like OvaScience. The fertility treatment company is mixing up the in-vitro fertilization market. It’s not creating new drugs, but instead introducing cutting-edge treatments that look to increase the poor IVF success rate, which is at 30% or less for most women.

OvaScience is led by Michelle Dipp, whose resume reads like a biotech greatest hits list: She has an MD and PhD from the University of Oxford, served as vice president of Sirtris Pharmaceuticals and led the company’s successful $720 million acquisition by GlaxoSmithKline (GSK) in 2008 before being named a senior vice president and head of CEEDD at GlaxoSmithKline. She went on to co-found OvaScience in 2011 at just 34-years-old.

Dipp talked to Fortune to weigh in on egg freezing as a company perk, the IVF markets that are set to boom and where OvaScience sees its opening in the fertility market.

Fortune: Earlier this week Facebook and Apple both announced that they will cover employees who want to freeze their eggs for up to $20,000 per person. What are your thoughts on this new company perk?

Michelle Dipp: The discussion that Apple and Facebook have sparked about benefits is very important because it brings fertility and fertility treatment options front and center. One in eight women globally struggle with infertility. Unfortunately, many women do not feel comfortable even discussing the topic, as there is often a perceived stigma that goes along with being unable to have a biological child. My hope is that as more companies offer fertility coverage, it will help women feel they have more control over their fertility. When a company supports the health and well-being of its employees and their families, it always benefits the business, too.

Are fertility treatments as a company benefit part of wider trend you’re seeing?

There is a trend in companies covering more fertility-related costs for employees; however, in the U.S. it varies greatly by employer and state. Outside of the U.S., certain countries cover fertility treatments, including Israel and France.

The Atlantic recently had a piece that presented two ways of thinking about this topic: It was another incentive in the perks arms race between tech companies and a sign that egg freezing has reached a kind of cultural normalcy. Where on the spectrum do you think it falls?

Advances in technology have helped make egg freezing a more viable option for women. As the technology has progressed, and more women become aware of the procedure, it makes sense that companies would begin to add it as a benefit for employees. I think it’s important to note that egg freezing is just one option available to women, and it cannot solve all of the underlying causes of infertility.

An Allied Market Research Report published earlier this year valued the global in-vitro fertilization market at $9.3 billion in 2012 with the expectation that it will grow to $21.6 billion by 2020. Where will the growth occur?

International demand accounts for 90% of the IVF market. Regions including Brazil, Latin America, Russia, Turkey and the United Arab Emirates are growing at a rate of 30-40%. Japan, the world’s leader in IVF cycles, recently reported it conducted approximately 326,500 cycles in 2012, a large increase over the prior report of approximately 280,000 cycles. We cannot project OvaScience’s growth over the next few years at this time. OvaScience launched our first fertility treatment in select international regions this year. We plan to launch our second treatment in the second half of 2015

What innovations are opening up the market?

For decades, society believed that women were born with a set number of eggs that die over time. It turns out that is not true. Researchers discovered the existence of egg precursor cells, or EggPC cells, which are immature egg cells found in the protective outer cortex of a woman’s ovaries. These cells can actually be matured into fresh, young, healthy eggs.

How is OvaScience using this discovery to create new technologies?

OvaScience is developing three fertility treatments based on the platform. The first is the AUGMENTSM treatment, which was launched in select international regions this year. The AUGMENT treatment uses the energy-producing mitochondria from a woman’s own EggPC cells to supplement the existing mitochondria in her eggs during IVF. Mitochondria is an important component of egg health, and the field discovered years ago that supplementing mitochondria improved IVF success rates.

The second option is the OvaPrimeSM treatment. This is a potential fertility treatment that would enable a woman to expand her egg reserve. OvaPrime places a woman’s own EggPC cells into her ovaries where they may mature into fertilizable eggs during the IVF process. OvaScience is conducting additional proof-of-concept work with OvaPrime and expects to launch the treatment in the second half of 2015.

The third treatment option is the OvaTureSM treatment, which is currently in preclinical development. The OvaTure treatment could help a woman produce healthy, young, fertilizable eggs without hormone injections by maturing a woman’s own EggPC cells into eggs outside of her body. This could provide an important new treatment option for women, particularly for those unwilling or unable to undergo hormone hyperstimulation, such as women diagnosed with cancer.

On a more personal note, you were born and raised in El Paso, Texas. How did you go from there to attending Oxford to becoming CEO of OvaScience in Boston?

I feel fortunate to have been born and raised in a border city that is also home to one of the largest military bases. In El Paso, I was exposed to a multi-cultural community. It was a wonderful place to learn about global health challenges. I trained as a doctor in the U.K. and did some work in South Africa, but quickly turned to scientific research in order to have the potential to help more patients.

I read that Harvard turned you down for undergrad, and now you’re running a company valued at $330 million in the school’s backyard in Cambridge. What did you learn from that rejection?

I wish this had been my first rejection in life. I was also a failed ballerina at the tender age of 12. Joking aside, one of the best experiences of my life was going to Oxford where I made great friends from all over the world. That opportunity has given me a more global perspective that is particularly important in the fertility space.