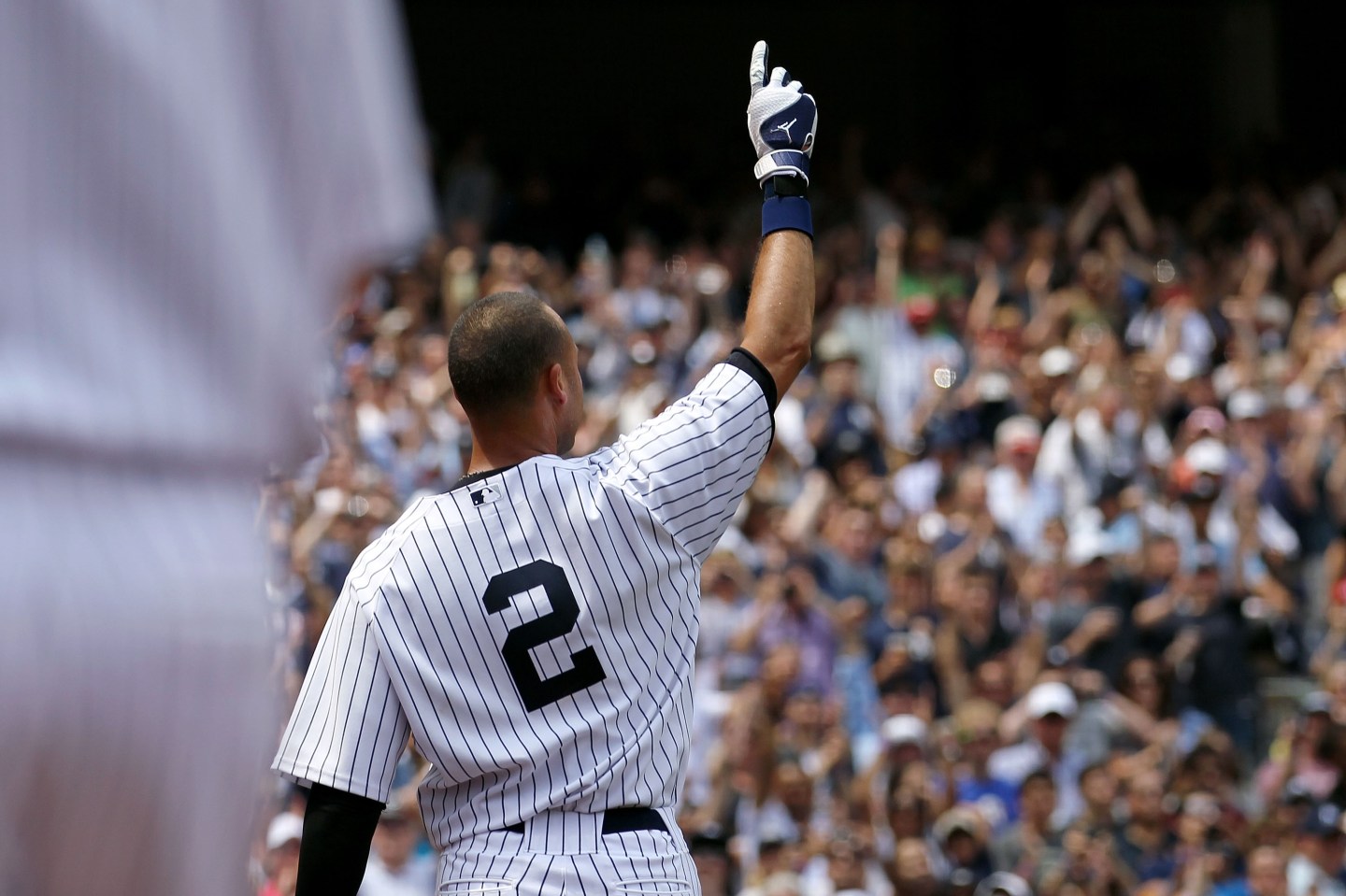 NEW YORK, NY - JULY 09: Derek Jeter #2 of the New York Yankees waves to the fans after hitting a solo home run in the third inning for career hit 3000 while playing against the Tampa Bay Rays at Yankee Stadium on July 9, 2011 in the Bronx borough of New York City. (Photo by Nick Laham/Getty Images)
Photo by Nick Laham—Getty Images

Fans wonder how it could have happened. How can a person who made so much money lose it so quickly? But the pitfalls are many: lending to friends and family, investing in half-baked business schemes, spending with abandon on luxury items, and the list goes on.

Derek Jeter, the Yankees great who played his final professional baseball game on Sept. 28 at Fenway Park, is making sure that doesn’t happen to him. The irony is that, financially, he’s not exactly at risk. In his 20 major league seasons, Jeter made more than $265 million in salary (the second-most of any MLB player ever, behind only his teammate, Alex Rodriguez). That’s not to mention off-the-field income from endorsements with companies such as Avon, Gatorade and 24-Hour Fitness.

As Baltimore Orioles legend Cal Ripken — frequently cited as one of the sterling examples of how to succeed in business after baseball — told Fortune last spring, “It’s interesting to me what Jeter will do. He has enough money to actually be the money guy and the idea guy, too. I would think he’s at the Michael Jordan level with money. I think Derek’s been thinking about things for a long time.”

Ripken’s theory has already proven true. Jeter has dived into business with aplomb, and with no pause to take a break. Curiously, the business he’s focused his attention on thus far is publishing. First, in November of last year, Jeter announced he would launch a book publishing imprint under Simon & Schuster. To be called (what else?) Jeter Publishing, it will focus on adult nonfiction (think sports memoirs) and children’s books. The debut book on the imprint, The Contract, is a middle school baseball novel, co-written by Jeter and Paul Mantell, that came out last month and currently sits at no. 1 in the School sub-genre within the Children’s book section on Amazon (AMZN). Jeter Unfiltered, a coffee table book of photographs of the star, will be the second title, and comes out next week.

When Simon & Schuster announced the imprint, a quote from Jeter in the press release revealed much about his thinking on the industry: “I understand how important content is in this day and age,” he said. He was not mincing words: on Oct. 1, three days after his final game, Jeter launched The Players’ Tribune, a publishing platform for athletes and their stories. Presented in a clean, well-designed scroll, the focus is squarely on the content. There are no ads. There is no clutter. It resembles Medium, or news sites like Quartz and Circa. (The site was designed by New York firm Wondersauce.)

For now, it has run only three articles, each one a personal essay from a major star: the first is an introduction to the site by Jeter, the second a piece on domestic violence by Seattle Seahawks quarterback Russell Wilson, the third a personal essay on relationships by NASCAR driver Danica Patrick. Each author is billed as a “senior editor.”

The site will reveal its next one on Thursday.

The Players’ Tribune is clever for two key reasons. First, similar to how he carried himself in baseball, Jeter is keeping things at a premium level. The athletes featured on the site are fellow mega-stars—not just athletes known in their sport, but athletes that are marketable and recognizable to most Americans. Wilson, a relative newcomer to the NFL, exploded into fame when he won the Super Bowl last February. He already has endorsement deals with Nike, EA Sports, Levi’s, and Microsoft Surface, and will only get bigger.

Patrick, though she has struggled to find success on the race track, is easily the most recognizable female driver on the planet, and arguably the second-most recognizable driver, period, after Dale Earnhardt Jr. She has a portfolio of sponsorships from companies like GoDaddy, Coke Zero, Tissot watches, Revo sunglasses, and Nationwide. (It’s also wise of Jeter to be showing equal love to male and female athletes.)

Second, the writing, at least thus far, is incredibly personal. After dealing with the press for 20 years—Jeter was always polite, but not exactly a font of colorful sound bytes—consider this the shortstop’s effort to take his narrative into his own hands, sans reporters. And he’s offering the same opportunity to others, in other sports.

Wilson’s piece came at just the right time, at the peak of a blistering controversy over the NFL’s problem with handling player conduct, specifically around how its men treat women. The essay, entitled “Let’s talk about Domestic Violence,” might make you think of a new CBS Sports Network show, “We Need to Talk,” which debuted around the same time and seeks to break barriers as the first ever all-female sports talk-show.

In other words, Jeter, or the people behind his web site, are being savvy not just about who they tap, but also when they publish. Wilson sounds as though he is directly addressing the reader, something you don’t get from the canned statements players make in quick news interviews or at post-game press conferences. “How many of you reading right now knew that October is Domestic Violence Awareness month? I certainly didn’t,” he writes. “I had to Google it.”

Patrick’s essay, meanwhile, gets even more personal. She discusses her relationship with her boyfriend, Ricky Stenhouse, Jr., a fellow NASCAR competitor. She calls him “extremely cuddly” and writes, “Our only mentality is to go flat-out. Hard, hard, hard.” This is not the stuff of a USA Today report the day after a race—and it sounds like Patrick’s actual voice.

It’s unclear what The Players’ Tribune will become—it could be a sort of Twitter for athletes, if Jeter opens it up to more people at once. Or it may remain a place just for longform essays, with only one at a time, to keep them special. But combined with the book imprint, it helps us see who Derek Jeter will be as a businessman: one who attacks an industry with diversified offerings. (Who jumps into online publishing just as they also enter print books, these days?)

More significantly, he is providing an important model for his baseball peers who are still playing. The key is to set up for the “second life” while still playing their sport. It’s what Gary Player did with golf course design while he was still playing on the senior tour. It’s what Roger Staubach did by working in real estate during the offseason. Mark Teixeira, another Yankee, is already doing it, with investments in a chain of juice bars and a partnership with private aviation company Wheels Up. (For more stories of athletes succeeding in business after sports—guys that are the exception to the too-common rule—check out Pro-Files, our joint series with Sports Illustrated.) It’s no surprise Jeter is emerging as a leader in post-sports business, just as he was on the field; the captain made our first-ever 50 World’s Greatest Leaders list this year.

A professional baseball player is four times more likely to file for bankruptcy than the average American. That’s according to CoachUp, a private coaching platform that helps retired pros make money by setting up a coach-for-hire page online. Ripken puts it this way: “The money [that they make while playing] is a curse. It’s so astronomical in this day and age that they have a tendency not to think about the future. They think they’re just set—and in many ways, many of them are, if they manage their money right and don’t blow it. But to be totally fulfilled, you have to find something that piques your interest almost as much as playing the sport. You can’t just sit back and do nothing.”

Jeter didn’t sit back for even a week. And when so many athletes fail financially after they walk off the field, the young guys playing today will look to him as a role model for how to keep working.