Gary Player: Cowboy on the green 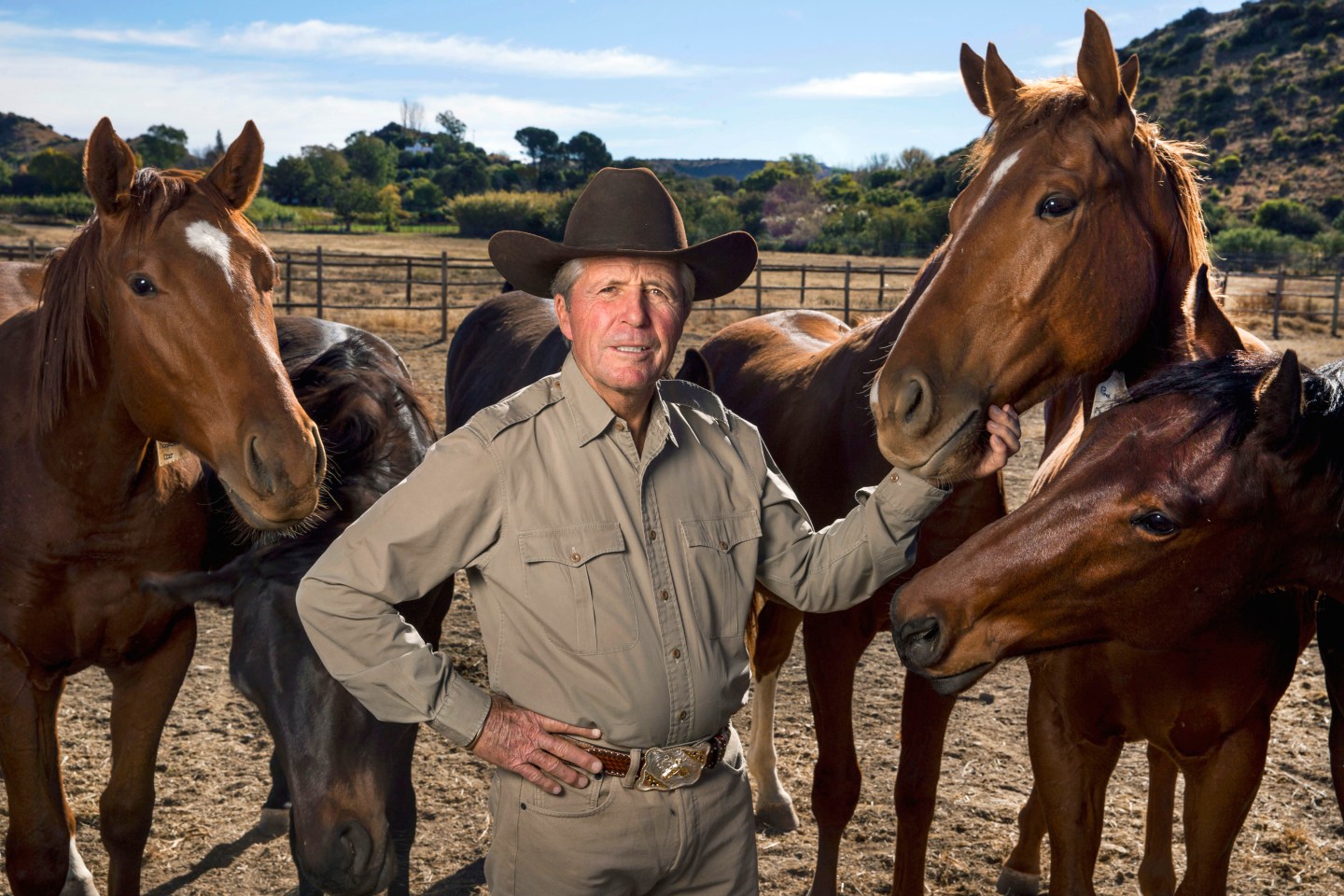 On the night before day one of the 2014 Masters, executives from Rolex, Callaway, Coca-Cola China, SAP, and other brands were gathered in the huge backyard of golf legend Gary Player’s guesthouse. They ate meat, swapped business cards, and listened to the blaring bagpipes of a Scottish group called the Red Hot Chilli Pipers.

It was the annual braai (a South African barbecue) that the Johannesburg-born Player hosts every year on the Georgia property he rents near Augusta National. The braai looks like an impromptu party but is in fact a carefully orchestrated networking event. And for the man the golf world calls the Black Knight (a reference to Player’s dress code on the course), who spends much of the year globetrotting as a self-styled ambassador for golf and fitness, it’s one of the few times all year that he sleeps in the same bed for eight straight nights.

Every April, Black Knight International (which houses the various arms of the three-time Masters champion’s business) spends big to fly in business partners for a week of hospitality that bests any sponsor package even NASCAR can offer. Marc Player, 52, who began managing his father’s brand when he was in his twenties frames the opportunity like this: “It’s a wonderful thing to have the head of a big development company from Eastern Europe or India say, ‘I’d like to meet with you,’ and we say, ‘Would you like to come watch the Masters?’ That’s so powerful.”

But even after the famed tourney ends, his dad is still working. On the Monday after, Player hosts the first leg of his invitational series at Champions Retreat in Augusta, a course with 27 holes: nine designed by Jack Nicklaus, nine by Arnold Palmer, and nine by Player himself. “This is work for him,” says Marc, the second oldest of Player’s six children. “He’s at dinners. He’s shaking hands. He’s a raconteur telling stories. And he knows there’s a very clear objective this week.”

That objective, of course, is to delight his business guests–which Player did skillfully this past April for two partners from Berenberg, a German bank founded in 1590. Every day, no matter where he is, the 78-year-old Player gets up at 5:30, then eats a small fruit bowl and drinks a green juice. On day one of the Masters, he headed to Augusta National’s exclusive $100 million, heated-from-underneath practice tee, bringing the bankers along to watch as he whacked a few balls in preparation for the ceremonial teeoff with Nicklaus and Palmer.

The SI cover boy after taking the Green Jacket at the 1961 Masters. Photograph by Art Rickerby—Sports Illustrated

Player let one of the bankers, Hans Walter-Peters, be his caddy for the day. The soft-spoken German was visibly thrilled. Later, after the teeoff (Nicklaus beat Player’s drive by a few feet) and a morning of VIP treatment, the bankers decided to up Berenberg’s commitment to the Gary Player Invitational in Wentworth, England, from $500,000 to a cool million. Berenberg also has a $10 million, three-year deal to have its name on Player’s sleeve.

“They are perfectionists,” says Berenberg’s Hendrik Riehmer of Player and his son. “Everything Marc and Gary do is carefully laid out and highest level.” And these days “everything” turns out to be a lot. Under the Black Knight rubric is Gary Player Design, which maps out golf courses; Player Real Estate, which develops resorts and residences on golf courses; the Player Collection (apparel); the Gary Player Invitational Series (tournaments); and the Player Foundation, a charitable arm that has raised more than $50 million, Player says, to fight poverty and promote children’s education around the world. Player, who won nine majors and continued to win events on the European Senior Tour into his sixties, is the public face of the operation; Marc is the impresario, taking on a role that melds agent, manager, and boxing promoter. “I’ve never, ever said that I have a great business acumen,” says the golfer. “What I do have is a very shrewd team, led by Marc, though I have more experience than them all–with common sense.”

Black Knight’s core business is golf-course design–a field jam-packed with former pros, it’s worth noting. Ever since Bobby Jones helped found and design Augusta National, golf champions (retired and otherwise) have been laying out fairways and diabolically plotting hazards. Palmer’s company has crafted courses from Costa Rica to China. Nicklaus has been personally involved in the creation of some 300 globally, according to Nicklaus Design, the company he founded. Toss in Greg Norman, Nick Faldo, and others and you’ve got the makings for a glut of greens. Witness the U.S., where 13 new golf courses opened last year and more than 150 closed, according to the National Golf Foundation.

Nonetheless, Player has been finding good lies these days in the Middle East, China, and India–in the last of these locales, recently designing a course for giant Indian real estate company DLF. He has also been among the first to favor a new style of bunkering called geotextile, which requires little maintenance and saves water. His company offers three tiers of design packages, with the price of each based on how closely Player is involved: The highest tier, called the Signature level, can set a developer back some $4 million. All told, his company has laid the blueprints for 325 courses around the world, with another 43 on the drawing table.

Player steadfastly won’t break out his company’s financials–though son Marc says it is absolutely profitable. One hint of that, indeed, is Black Knight’s merchandising business, which sells some $200,000 a month in apparel and accessories (such as belts), says Marc, who is determined to keep the business humming long after Player Senior has hit the Nineteenth Hole in the Sky. “Even though I don’t like to tell him, because he thinks he’ll live forever, he will die,” says Marc. “And I think about that every day. But I think 20 years from now, 50 years from now, people will go into the Gary Player boutique and they will buy the apparel. They will buy the book on diet and health. They will buy the golf instruction video. They will believe in the spirit that is all things Black Knight–healthy, enthusiastic.”

Dad, for his part, is doing everything he can to make that reasoning seem reasonable. Player says he wants his epitaph to say, “Here is a man that was interested in his fellow man. And in education and health. And he bettered the lives of poor people.”

A lofty order, certainly. But as he walked out of the clubhouse of Augusta National after a long morning of signatures, handshakes, and television interviews, Player said in a chipper tone, “Okay! Made another million friends–wasn’t that nice?” And he meant it.