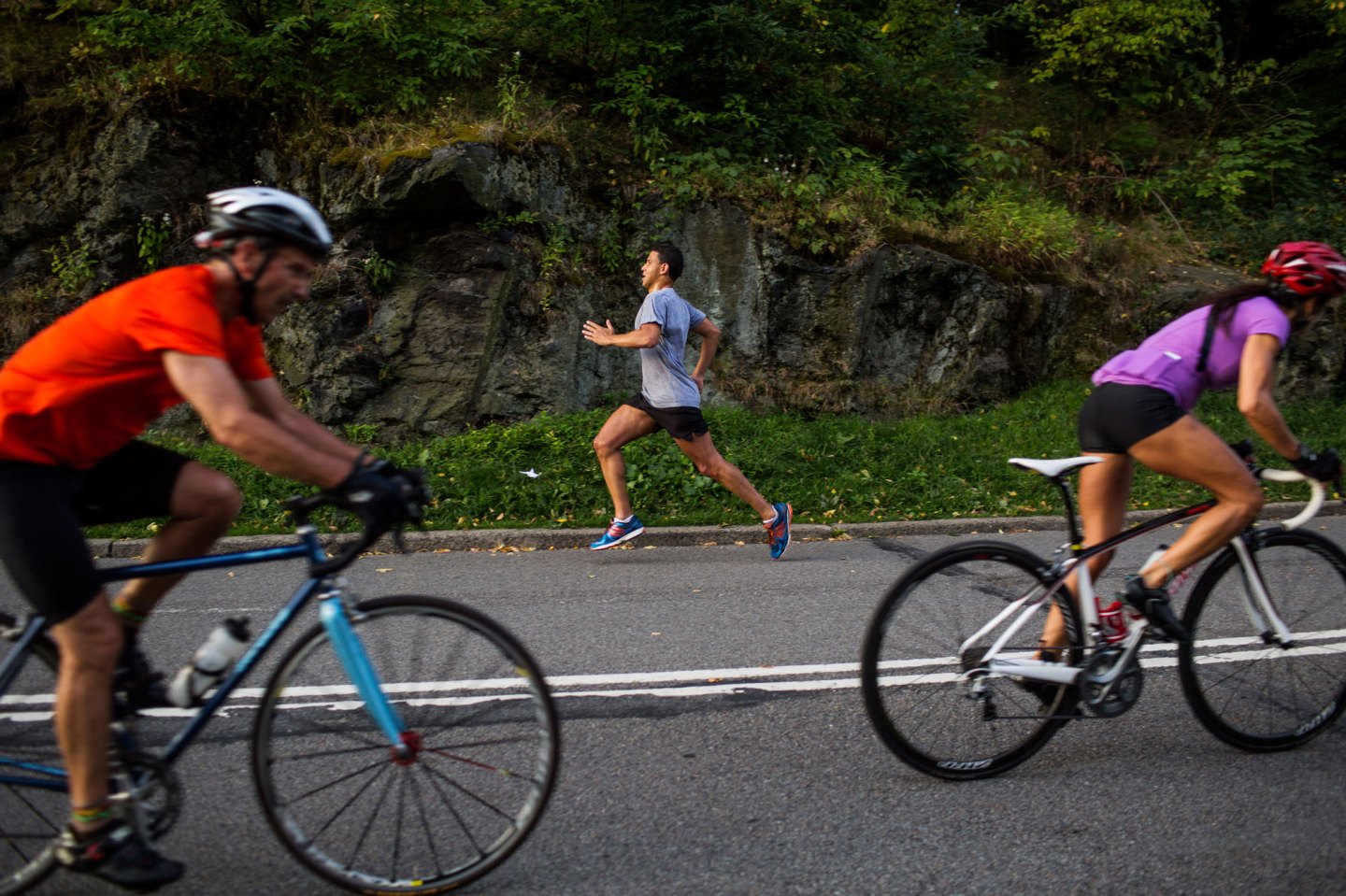 At 35, Robert Reffkin’s resume is eye-popping.

After finishing college at Columbia University in two years (well, 28 months) he went straight to McKinsey, where he spent two years as a general analyst before going to work at Lazard. From there, he applied to be a White House fellow. One of the youngest to go through that program, Reffkin was 25 when he did the fellowship, which involved working with then-Treasury secretary John Snow. After the White House, Reffkin went to Goldman Sachs (where else?), where he spent five years as a VP in the investing group and then a year as Gary Cohn’s chief of staff. Along the way, he found the time (and support) to raise $1.3 million for former New York City councilmember Eva Moskowitz’s Sucess Charter Network to open its first Bronx school, Bronx Success Academy 1.

And now Reffkin is focusing on… real estate.

Urban Compass, the realty platform he founded exactly two years ago, seeks to bring the ease of mobile technology to the often aggravating process of buying or renting an apartment in New York City. The numbers have ballooned quickly: the company now has 96 agents, 1,300 listings, and a total of $73 million in venture funding—from Peter Thiel’s Founders Fund, Thrive Capital, Goldman Sachs, Marc Benioff of Salesforce and American Express CEO Kenneth Chenault. On the side (with what time?), Reffkin is chairman of America Needs You, a nonprofit he founded to provide career development, mentorship, and academic support to first-generation college students to help them succeed after school.

Reffkin, no. 29 on this year’s 40 Under 40 list, stopped by the Fortune offices last month to chat about his past and Urban Compass’s future. Here’s an edited transcript.

Fortune: You went to college in New York and stayed, but you’re from California, right?

Robert Reffkin: Yes. I’m originally from Berkeley, California. I grew up in a single-parent home; my mom is Israeli and my father was African-American and was from Louisiana, but passed away when I was very young. I went to high school in San Francisco, so I commuted two hours to school, two hours back. I was always fascinated by the big city, and I ultimately chose Columbia for college because what city is bigger than New York? I’ve always been in pursuit of energy, of aspiration, of big dreams.

Let’s start with being a White House Fellow—what does that entail, how does a person become one?

When I was at Lazard I became very close with Vernon Jordan, and that was who urged me to apply. Vernon is one of President Clinton’s best friends, and he knew about the program and kept telling me to do it. He said [imitating a stentorian voice], ‘Son, I think you should become a White House Fellow. My good friend Colin Powell was a White House Fellow, and I think you should be one. Every young professional in the private sector should get exposure to the public sector, even just for one year, because the relationships you develop and the skills you attain will be transferable to any sector you choose.’ So, ultimately, I took his advice. I was really fortunate to be selected.

What does the program involve?

Each Fellow works as an adviser to a different department secretary. I was at the Department of Treasury, and in that role you work in special projects there, and every day you have lunch with a different global leader. Then you also travel across the world with the rest of the Fellows, seeing leadership in action.

Did you sort of catch the politics bug after doing that?

I really did. I came back to New York City really fascinated with politics, and I decided that the best place to have impact in the world is through public policy impact. And for me, as much as I love federal, I think local, New York City is the greatest place. In New York, it’s big enough to matter, small enough to make a difference. It’s a city of immigrants—who, by definition, are entrepreneurs and will grab hold of any opportunity given to them. So I’m fascinated by New York City and I hope I have the opportunity to impact policy in the future.

But first, you went into investment banking.

That’s right. I went into investment banking at Goldman Sachs.

Did you love that, was it everything you dreamed for?

[He laughs.] Well, I loved working with really smart people who were really great at what they were doing, but in my core, I was missing something. I was missing working with entrepreneurs that are really passionate and want to build something that didn’t exist before. So, ultimately, I left to found Urban Compass.

What is Urban Compass, in a nutshell?

It’s a real estate platform that’s powering a brokerage. And in the long term, we have aspirations to go beyond the transaction to connect customers to their local goods and services.

There are a lot of real estate brokerages already. Did NYC really need another one?

I think finding an apartment, particularly in New York City, it takes a long time. It’s very complicated, there’s not transparency, it can take weeks to find an apartment. We have a aspiration for it to take days. And that’s what technology is best at: increasing transparency, simplifying processes, and making things much shorter in terms of how much time it takes. So that’s why we did it.

Ori Allon and I came up with the idea. Ori had already sold one company to Google [the search algorithm Orion], another company to Twitter [Julpan, a tool for analyzing social media activity], and my background was Goldman Sachs, the White House, and McKinsey, so we wanted to join forces to do something that was both technology, and business, and strategic partnerships, and that touched everybody. What could we do that required business minds and tech? Now, everybody has to live somewhere, and real estate in this city is really fascinating and has not been impacted by technology at all. So we decided that was the space.

What are the specific difficulties of real estate in New York?

The most difficult aspect is how multifaceted the stakeholder base is. You have buyers and sellers. You have renters, and those renting. You have agents, you have consumers. You have landlords, you have developers. So you need to create a product that works for everybody. I think the problem of a lot of the others that have tried to impact this space before is they want to impact one entity. But you can’t create a product for an entire marketplace that only helps one stakeholder. So we’ve really listened and learned to each stakeholder base.

Paint us the picture of Urban Compass today, nearly two years after its founding.

We have over 150 employees today, and we’ve hired 35 of them in the last four weeks. We’re expanding to two new offices in the next two months, and revenue has grown three times in the last two and a half months. Things have never been better than they are now.

You talk about Urban Compass’s tech a lot, but many rival agencies would argue they have strong tech too. [There is also Redfin, which gets a lot of press for its tech, though Redfin is not in Manhattan yet.] What really sets Urban Compass apart?

Our technology was built by a bunch of former Google, Twitter and Foursquare engineers. As a result, we are one of the only firms in the country with an agent mobile app. In terms of mobile apps for consumers, most firms still don’t have that either, and our apps interact with each other and speak to each other. On top of that, we’re building a research and data arm to provide insights to agents and consumers to help ensure that they make the right decisions. We have a lead algorithm where, when you select an apartment, it will go right to the agent that has the best experience in renting or selling apartments in that specific area.

Our agents are of course smart, committed, nice, but the most important thing is experience. We have hired away some of the very top agents in New York City. It’s very important to us that agents see the value in Urban Compass, and that we simplify their lives.

When Urban Compass first launched, the press raved that it had much lower fees for customers. But it seems that’s not the case anymore and the fees are around 15 percent, which is what they are everywhere else. What changed?

That was one of our early mistakes. Our original model was nice agents and low fees. And we still have nice agents—we think we have the best agents—but what we learned was that you can’t get the best agents for a lower fee. You just can’t, they won’t come work for you. And so it was more important to us to have the very best, most experienced agents. The agent is better, so the experience is better for the consumer.

Nowadays a lot of startups define themselves by other startups, like, “it’s Tinder meets LinkedIn,” and so on. What is Urban Compass?

You could say we’re combining the best of Zillow with the best of Corcoran. We have exclusive listings, and we’re focused on data for informed decision-making. The Uber-like proposition for agents is: you will make more money and it’s simpler.

How soon will Urban Compass open up shop in other cities?

We’re expanding to D.C. by the end of the year.