Talenti: Got a whole gelato love 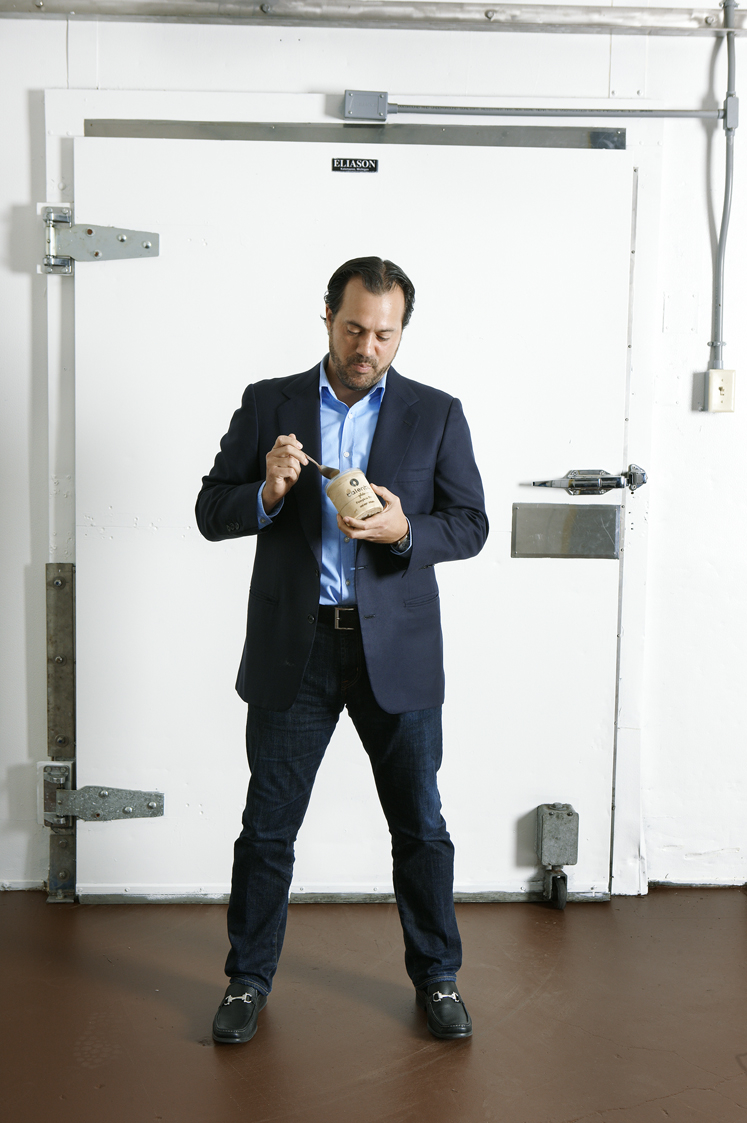 The promise of adventure lured Josh Hochschuler to Buenos Aires, but it was his love of Argentinean gelato that launched a business anyone with a sweet tooth could love. Hochschuler, 41, founded Talenti Gelato & Sorbetto and survived its rocky early years with credit cards, loans, and the cash he got from selling his furniture and car. Today, Talenti has succeeded to the point that Häagen-Dazs has relaunched a gelato line and Breyers has entered the fray. Churned at a lower speed than regular ice cream, thus incorporating less air, and made with less fat, which brings out the main flavor, gelato commands prices often 25% higher than traditional ice creams. Talenti is now the No. 3 premium ice cream in the U.S. (behind Ben & Jerry’s and Häagen-Dazs, No. 1 and 2, respectively), with $95 million in revenue last year. Hochschuler’s story:

My father joined the Air Force during Vietnam and was stationed in Wichita Falls, Texas, where I was born. My mother was the family homemaker. After the military, Dad started his practice as a spine surgeon in Dallas, so that’s where I grew up. As a young man, my dad had traveled to Yugoslavia as part of a program called the Experiment in International Living. When I was 14, he pushed me into the same program, so I went to Japan, where I lived with a family for a summer. Because of that, I loved traveling and visiting other countries.

In 1991, I went to Boston University to study business administration and finance. I’d work as a waiter, busboy, and bartender during the school year, save up my money, and travel through Europe in the summers. After graduating in May 1995, I traveled through several countries in Central and South America with a buddy.

I was 22 and loved Argentina—the people, the architecture, the food, their love of sports, and the nightlife. I decided that’s where I wanted to live. I didn’t have a job and didn’t speak Spanish. But I had an old Jeep Cherokee and some furniture, and sold it all. With $3,000 in savings, I took two suitcases of clothing and bought a one-way ticket to Argentina.

“I fell in love with the gelato—the taste, the texture, the consistency, and the experience of gathering to talk about it.”
—Josh Hochschuler

I landed in Buenos Aires on Jan. 5, 1996, and didn’t know a soul. Luckily, not long after, I met a taxi driver who knew a woman who was renovating an apartment. She needed money to finish the work. So I gave her a couple months’ rent upfront in exchange for being able to sleep there immediately.

I taught English at the Berlitz language school in the mornings to make money and went to the financial district, knocking on doors, in the afternoons to find a job. I got lucky with a gentleman at the Bank of Boston in Buenos Aires who had done what I was doing when he was young in New York. He decided to take a chance on me. So I worked at the Bank of Boston’s Buenos Aires branch as a strategic planning analyst for two years, then became the strategic sourcing manager.

One of the things I loved about Argentina was the cultural interaction with food. People hung out at the gelato and pastry shops to debate the merits of what they ate. I fell in love with the gelato—the taste, the texture, the consistency, and the experience of gathering to talk about it. More than 50% of Argentina’s population has Italian roots, and the gelato is made from someone’s Italian grandma’s recipe.

In 2001, I wanted to be closer to family, so the Bank of Boston, which had merged with Fleet Bank, gave me a job in Boston. Before heading back to the States, I traveled in Asia for a few months, then got word of a hiring freeze, eliminating the job I was going to start in Boston. So I decided it was the perfect time to do something on my own, with something that I loved from Buenos Aires, namely gelato.

I started approaching the famous heladerías [ice cream parlors] in Argentina, and one agreed to work with me. So I went back to Argentina for three months to apprentice with a family that’s been in the business for several generations. They’ve asked me not to reveal their name, so I’ll call the owner Jorge.

In February 2002 I put together a business plan and approached 108 family members, friends, and friends of friends for funding. I got 19 of them to agree, and raised $600,000. Jorge invested $15,000, came to Dallas, and brought a manager for the store, which I named Talenti after Bernardo Buontalenti, the inventor of gelato.

In retrospect, we didn’t raise enough money to open the store. The architecture, engineering, and construction cost about $300,000. But the project ended up going 10% to 15% over budget due to unforeseen circumstances, and I ended up with some subcontractor liens. My lease required no liens, so I was in immediate default. Thankfully, the landlord understood and let me open anyway, and eventually we resolved the liens.

“I couldn’t make payroll and asked my 15 employees to give me a week to find the money. That was the moment I thought it was all over.”

The first year, revenue was $275,000, and I was hoping for double that. We couldn’t get people to come in for dessert after dining out in a restaurant. The store remained open for two years, operating at a loss. The second year, I began to convert the concept to wholesale, taking the gelato to restaurants and supermarkets. My Argentinean partners considered things sold in supermarkets low-end products and as a matter of pride did not see eye to eye with me on the move. So I bought them out in 2005.

I closed the store and found a 2,700-square-foot space in an industrial area. I was close to $100,000 in debt and had to let all my employees except one go. The two of us made the gelato, and I did all the sales and deliveries. I raised some money from my original investors, took out a dozen or so credit cards, maxed their lines, and sold my car and furniture to continue forward.

In 2006 we did $429,000 in sales, and Costco Texas picked us up. We got into Whole Foods and the local Kroger and Safeway stores, but we were still hanging on by a thread. Then a specialty chain that I had allowed to go beyond our 30-day terms placed a massive order, sold it at half price, and then went out of business. I couldn’t make payroll and asked my 15 employees to give me a week to find the money. That was the moment I thought it was all over.

I took out a personal loan for $25,000 to hang on until we could stabilize. The opportunity with Costco led to getting into a number of natural food and specialty stores where we gained visibility. It became a domino effect, and the business just took off. In 2007 we had $1.2 million in sales, but I needed funding and more expertise, so I started looking for a partner.

Hochschuler (right) introducing his gelato at a Costco in Dallas in 2005Photo by: Talenti Gelato

My best friend from college introduced me to Steve Gill and Eddie Phillips, the guys who founded Belvedere and Chopin vodkas. I flew to Minneapolis and told them Talenti was a luxury brand in need of a proper business structure, capital, and a team with sophisticated sales and marketing know-how. They loved it. They bought out my original investors, then provided $1 million in funding to move forward. Eddie had cancer and died in 2011. But Steve joined me in 2008, and we started running the company together. Eddie’s son Dean inherited his estate and joined us in 2012. So the three of us own the company now.

It was nice to be under the radar at first. Everyone thought we were their local gelato, and we built a cult following. But when your sales get big enough, the competition says, “I’m losing market share.” Häagen-Dazs’s gelato line relaunched in 2013. Breyers’s gelato launched this year.

We stopped selling to restaurants and hotels in 2013. It’s a different distribution network, and we didn’t have the capacity to fulfill both needs. There’s plenty of space to grow in the grocery stores.

There’s something exciting about building a brand that your name is behind. It’s a rewarding way to build a life. I’m married and have three little boys, and when I show up on Parents Day at school and bring the gelato, I feel sorry for the lawyers and accountants who come after me. We often hear from people who say that our gelato brings them a memory of a trip to Italy or Spain or France with a loved one. I love the fact that our business is part of making sweet memories.

My Advice: How to get through the tough times
Josh Hochschuler
Founder of Talenti Gelato & Sorbetto

I DERIVE A GREAT DEAL OF COMFORT FROM MY FAITH. I believe things happen for a reason and look for a lesson or silver lining when confronting hardship. The Lubavitcher Rebbe, of blessed memory, has played a meaningful role in my life, and I often turn to his teachings for inspiration and guidance.

HUMOR AS A RELIEF VALVE When I’m facing adversity, people will often hear me say, “Was it over when the Germans bombed Pearl Harbor?” which is a line from Animal House. Saying it always puts a smile on my face.

A GOOD FRIEND SENT ME A FRAMED QUOTE. Of Teddy Roosevelt’s “The Man in the Arena” speech (“It’s not the critic that counts, but [the man] who actually does strive to do the deeds…”), which I keep in my office. My friend wrote, next to the quote, “You are in the arena.” I read it whenever I feel overwhelmed or daunted.