Melinda Gates on philanthropy: ‘I want to make sure we do the right thing for women and girls’ 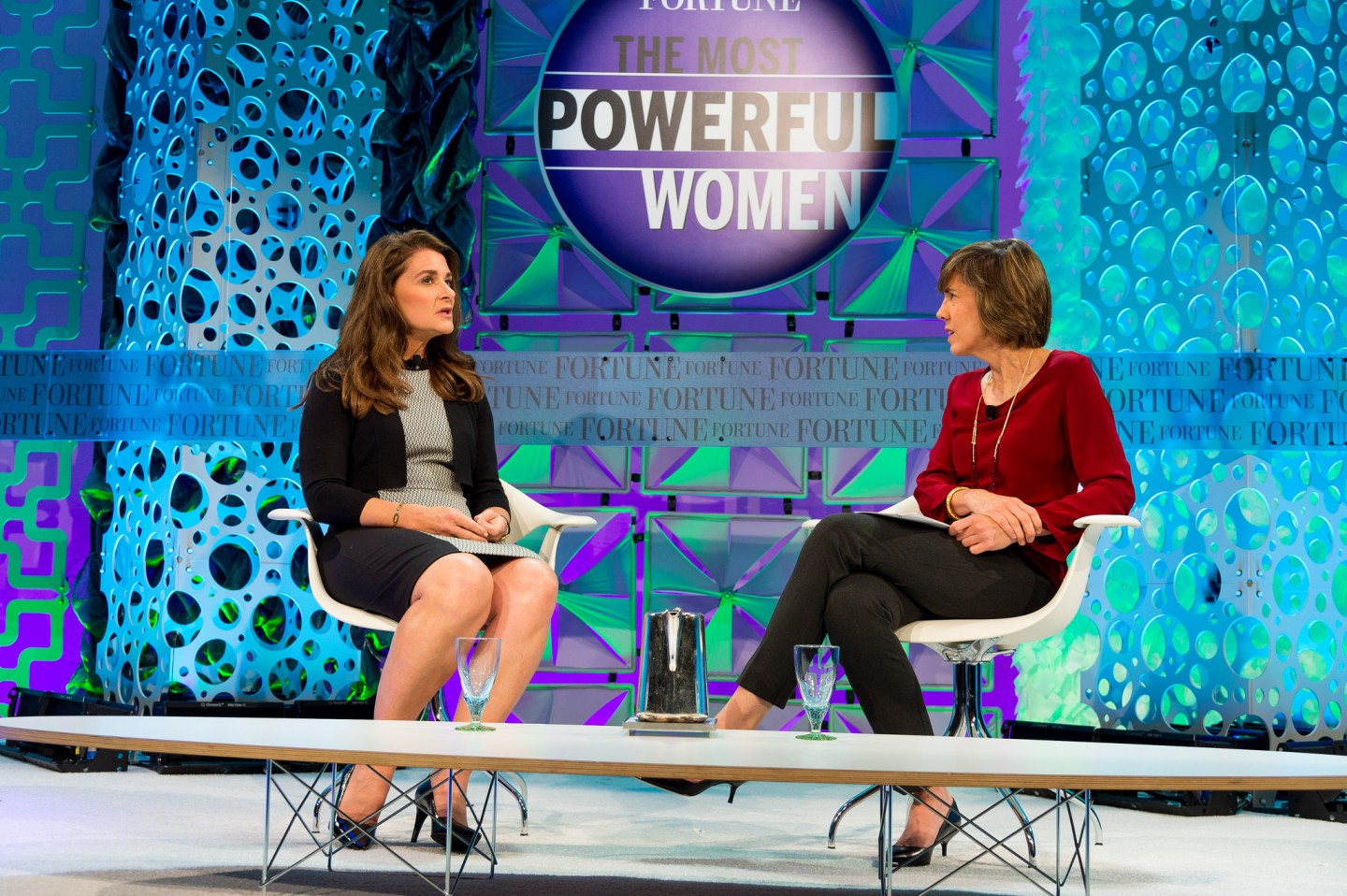 In order to improve the lives of women and girls around the world, “it’s not enough to just to talk about women and girls,” Melinda Gates says. Speaking directly to an audience of women CEOs, executives, and business leaders, she said that people have to be willing to use their voice, dollars, and network in order to make an impact. “We have to be willing to stand up and say, ‘I’m willing to fund some of these things.'”

Gates, a philanthropist and co-founder of the Bill and Melinda Gates Foundation, was interviewed on Wednesday by Fortune senior editor-at-large Pattie Sellers at the Fortune Most Powerful Women Summit at Laguna Niguel, Calif.

The Gates Foundation, one of the most active private foundations in the world, recently declared in Science magazine that it aims to put women and girls “at the center of development.”

“One of the things that I’ve gotten to do for the foundation is really to travel,” Gates said. She talked about how she would break away from city centers during her trips on behalf of the organization to explore nearby villages and slums and speak to women who lived there. The side trips brought her a greater understanding of the lives they lived, she said, and how the Gates Foundation could have greater impact on their day-to-day existence. Gates realized her foundation wasn’t doing a lot for women at scale.

The Gates Foundation was started as a research and development organization, with a focus on mass diseases. “We also need to do delivery,” Gates said. It wouldn’t be enough to create a vaccine or cure for a disease if the mothers of at-risk children wouldn’t allow its distribution. “I want to make sure we do the right thing for women and girls,” she said.

Gates also spoke about her number-one priority: the importance of family planning and contraceptives. Family planning, she said, can change the trajectory of a woman’s life and the lives of her children. “We think about 14 million girls are married before the age of 18,” she said, and the maternal mortality rate is still “huge around the world.”

The ability for a women to plan when and how often to have children is crucial for her health and key for her economic growth. One of the goals of the foundation is to fund research into new types of contraceptives. Gates spoke about a Washington University scientist who is looking to develop an oral contraceptive that would dissolve under a woman’s tongue like a breath mint.

In addition to the focus on women and girls, the Gates Foundation is still looking to help tackle mass diseases, and recently gave $50 million towards the fight against Ebola. Gates Foundation head Sue Desmond-Hellmann saw the crisis coming and convinced Bill and Melinda Gates to put their money towards early prevention. Gates spoke about how a Gates Foundation-funded polio clinic in Nigeria decided to convert to an emergency Ebola clinic, helping that nation to keep its Ebola rate to only 19 cases.

When asked by Fortune managing editor Alan Murray how the Gates Foundation works with governmental organizations like the World Health Organization, Gates spoke about the need for public-private partnerships. For instance, UNICEF, the Gates Foundation, and the University of Washington might have different, but complementary, takes on how similar research and health initiatives, and use those differences to improve each other’s work.

“Intellectual pushback is what you want in a private-public partnership,” she said.